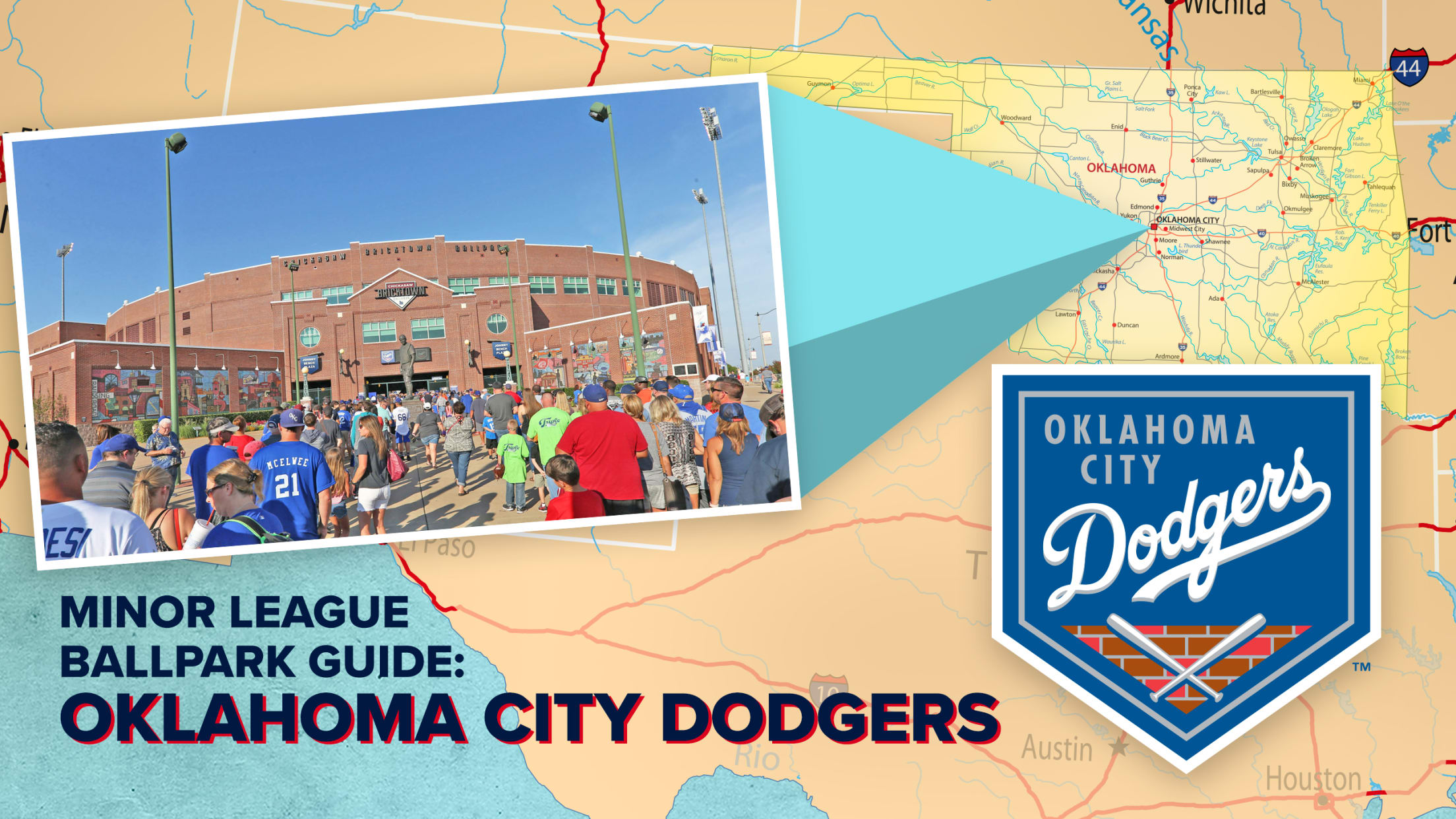 Welcome to Chickasaw Bricktown Ballpark, home of the Oklahoma City Dodgers. Learn about Oklahoma sports legends, snag a photo with a sibling mascot duo and make time for a postgame stroll down Flaming Lips Alley. 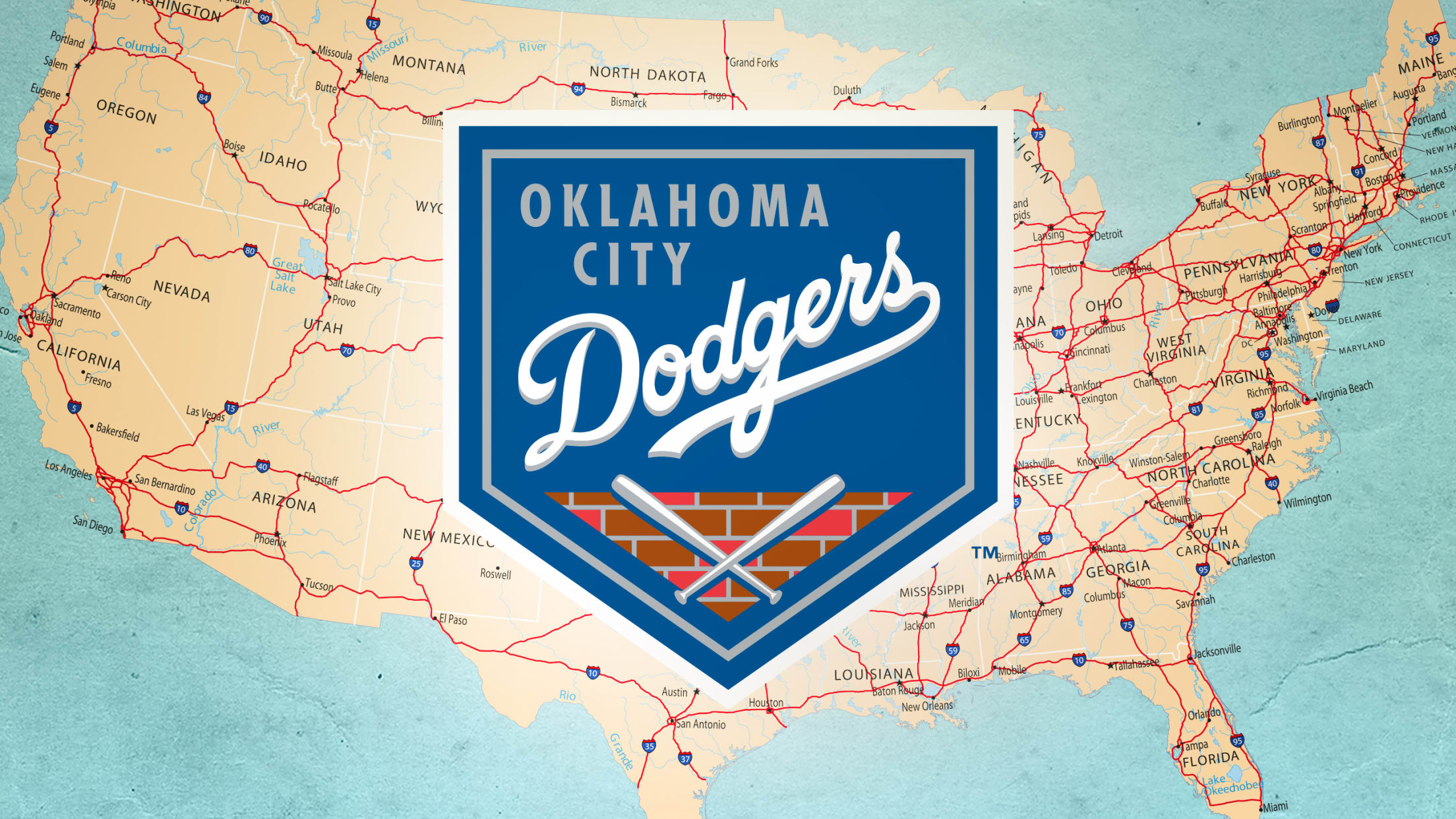 Major League Baseball arrived in Houston in 1962, necessitating the relocation of that city's previously existing Minor League team. The Houston Buffaloes therefore became the Oklahoma City 89ers, who have survived and thrived as a Triple-A entity in Oklahoma City ever since. The 89ers, who changed their name to the RedHawks in 1998, were affiliated with the Texas Rangers from 1983-2010 and the Houston Astros from 2011-2014. Following that season, an ownership group headed by Los Angeles Dodgers minority owner Peter Guber bought the team. Its name, and affiliation, was summarily switched to the Dodgers. 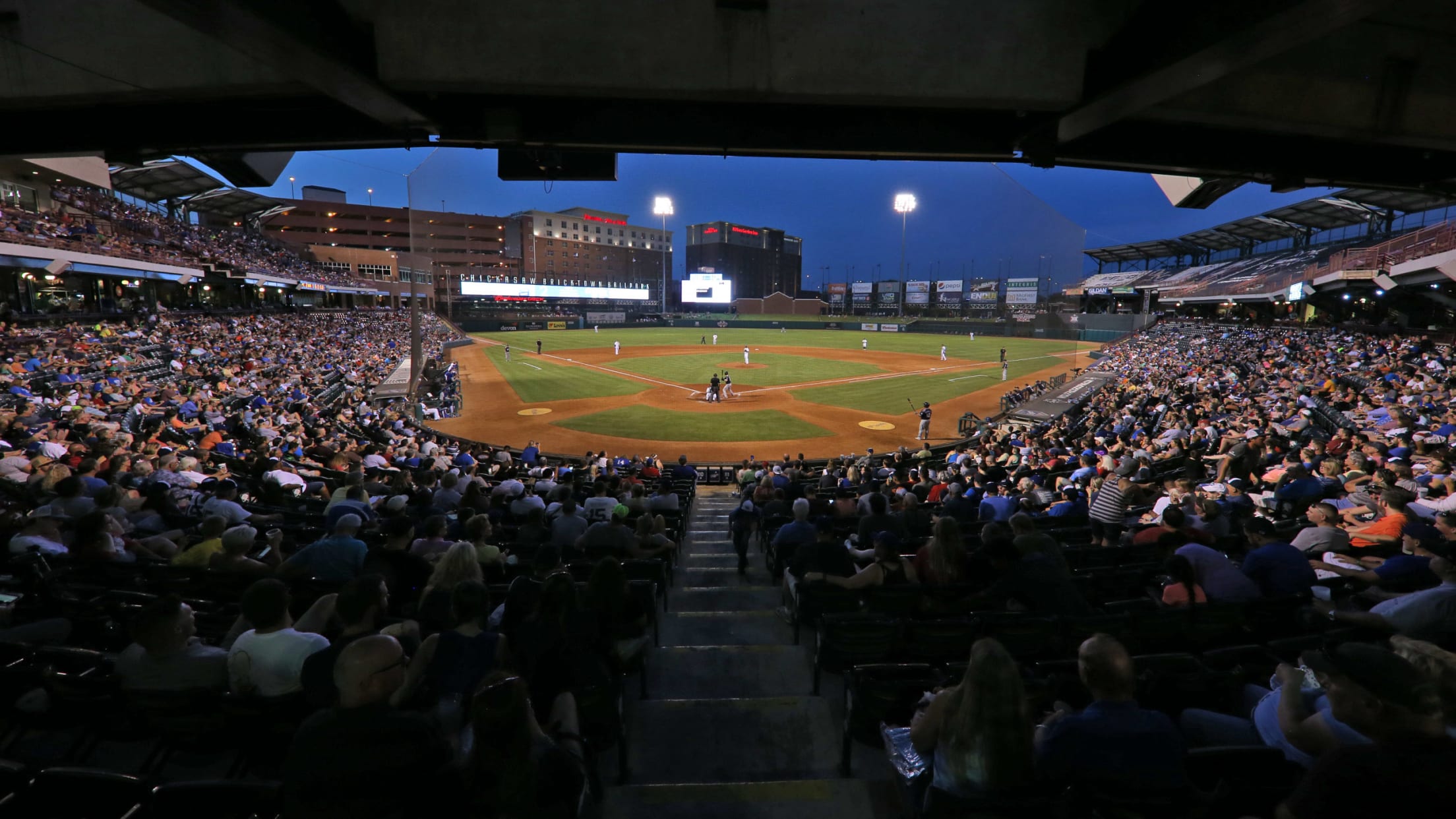 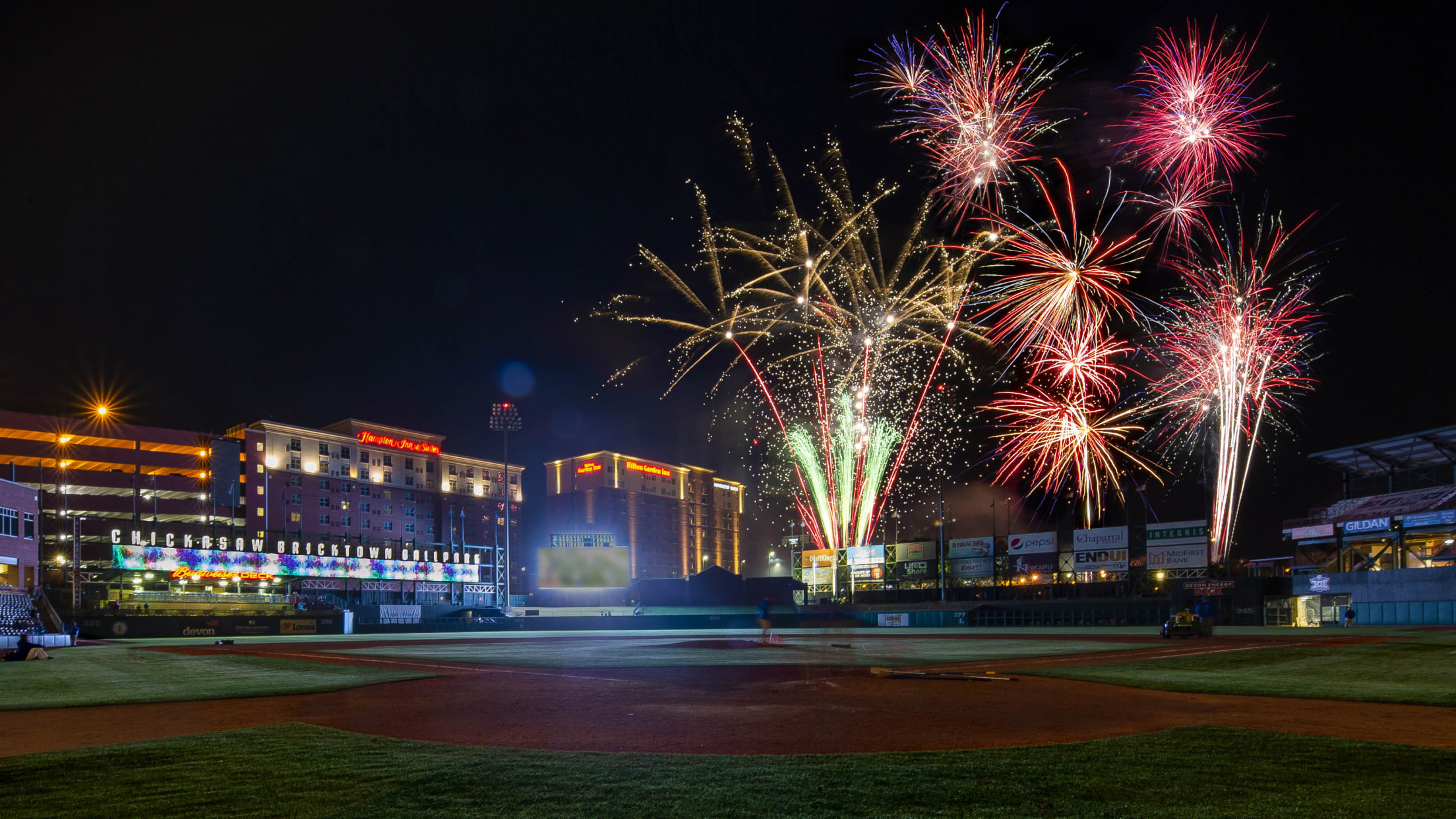 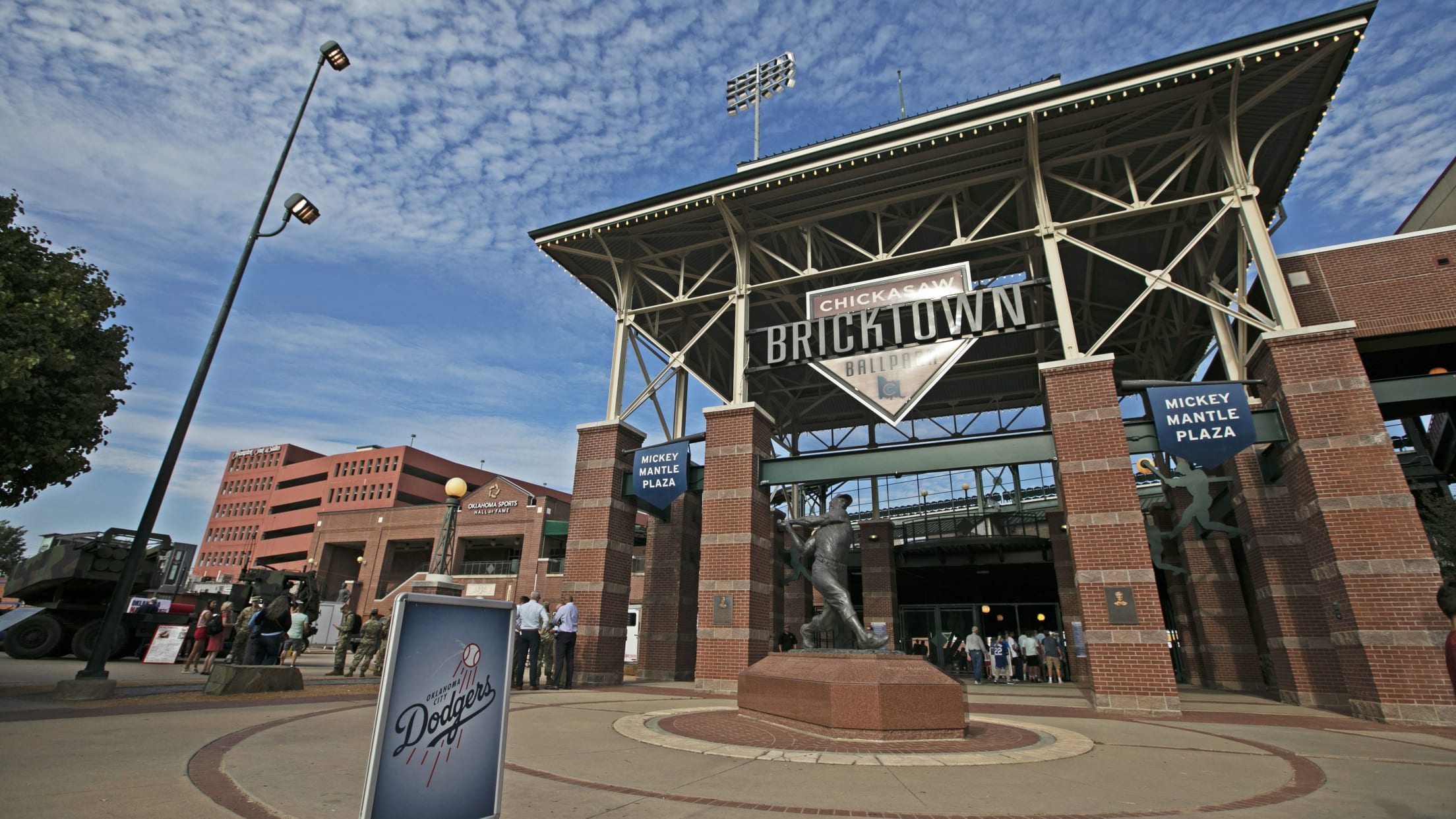 A walk around Chickasaw Bricktown Ballpark's exterior provides an impromptu lesson in Oklahoma baseball history. A statue of Johnny Bench stands outside the home-plate entrance; Mickey Mantle and Warren Spahn are similarly honored, with the former standing outside third base and the latter in right field. Bench and Mantle both hail from Oklahoma, while Spahn resided in the state for many years.

Johnny Bench Drive and Mickey Mantle Drive both border the ballpark, as does Joe Carter Avenue (Carter is an Oklahoma City native). Mantle and Carter's streets both intersect with Flaming Lips Alley, located just beyond the outfield fence. This, of course, is named for the city's most well-known band of psychedelic-pop weirdos. 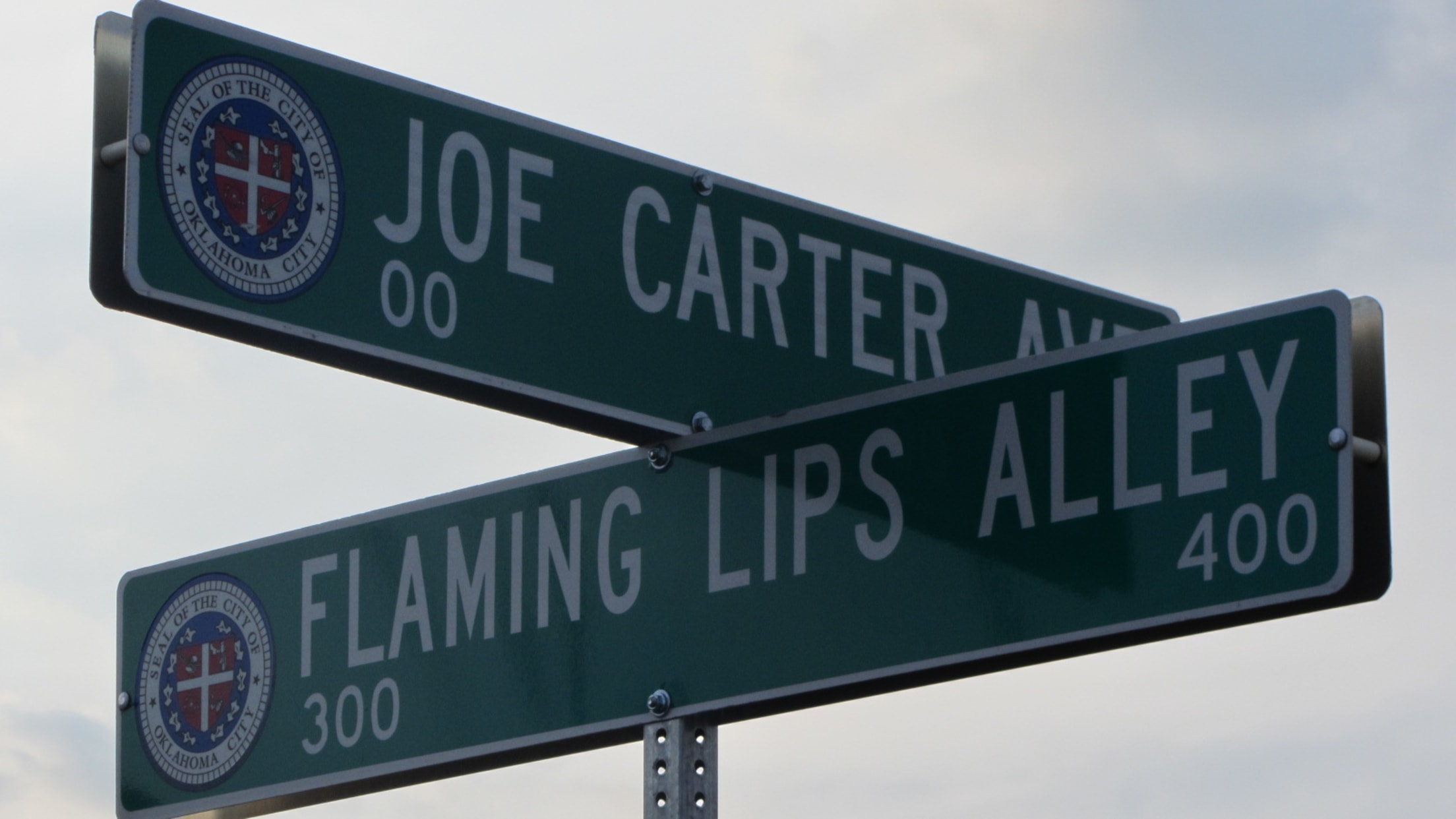 A more thorough exploration of the state's sporting history can be found inside the ballpark, courtesy of the Oklahoma Sports Hall of Fame and Museum. Located in a converted former restaurant space on the left-field side, the museum is open to visitors Tuesday through Saturday (although generally not during games). A statue of Oklahoma sports legend Jim Thorpe stands outside the entrance. 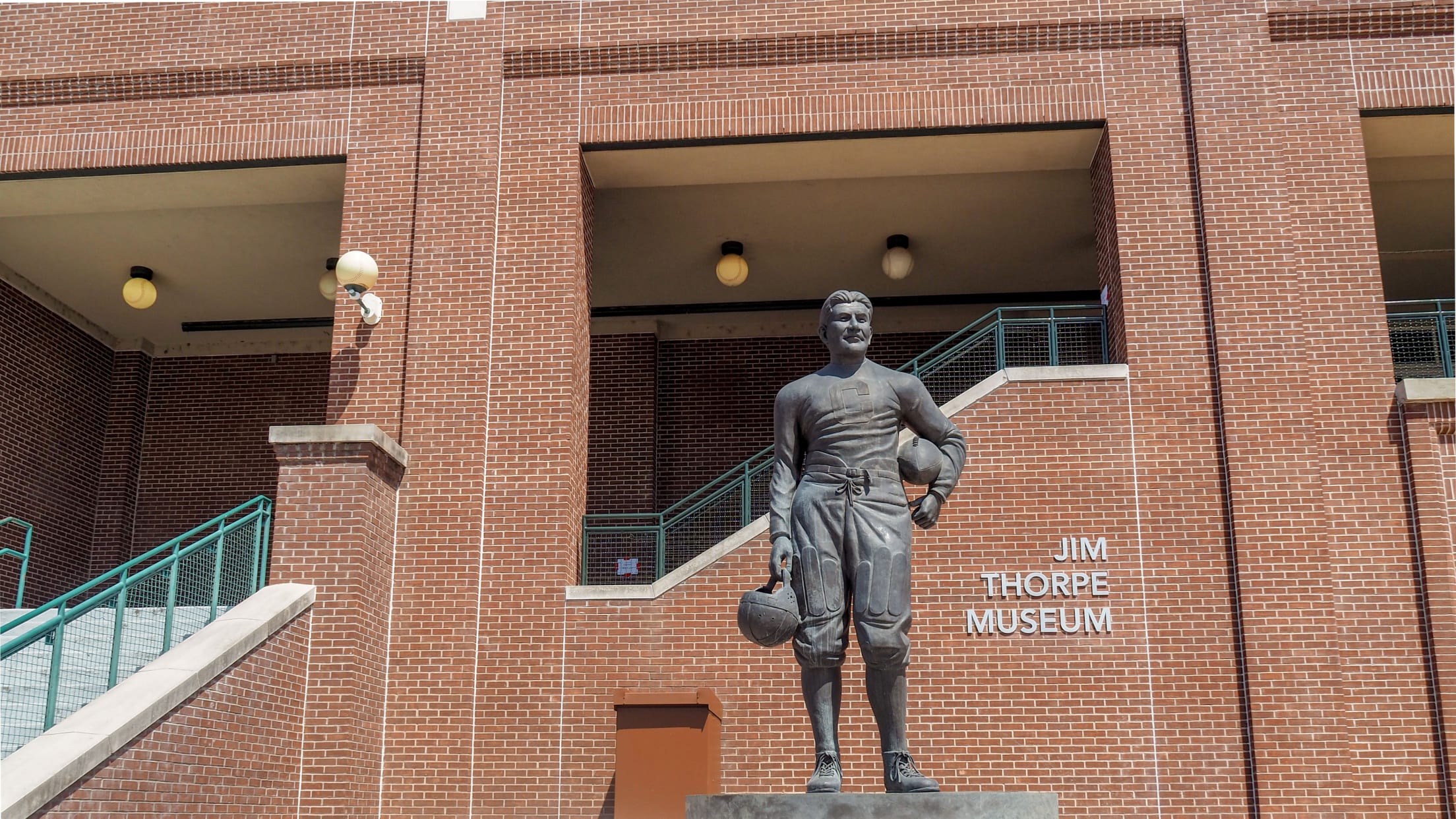 Chickasaw Bricktown Ballpark is a multi-level behemoth that is far bigger than today's more intimate facilities. The official capacity is 9,000, but the upper-level seats on the first base side are closed off to fans.

The ballpark boasts a 360-degree concourse and a massive scoreboard (as well as a giant auxiliary board in left field). One of the more scenic spots to watch the game is the Skyline Deck in right field, which offers views of Oklahoma City buildings such as the Devon Energy Tower (the tallest building in the state).The Budweiser Deck, in left field, features rail and picnic table seating as well as ample opportunity to catch a home run ball. 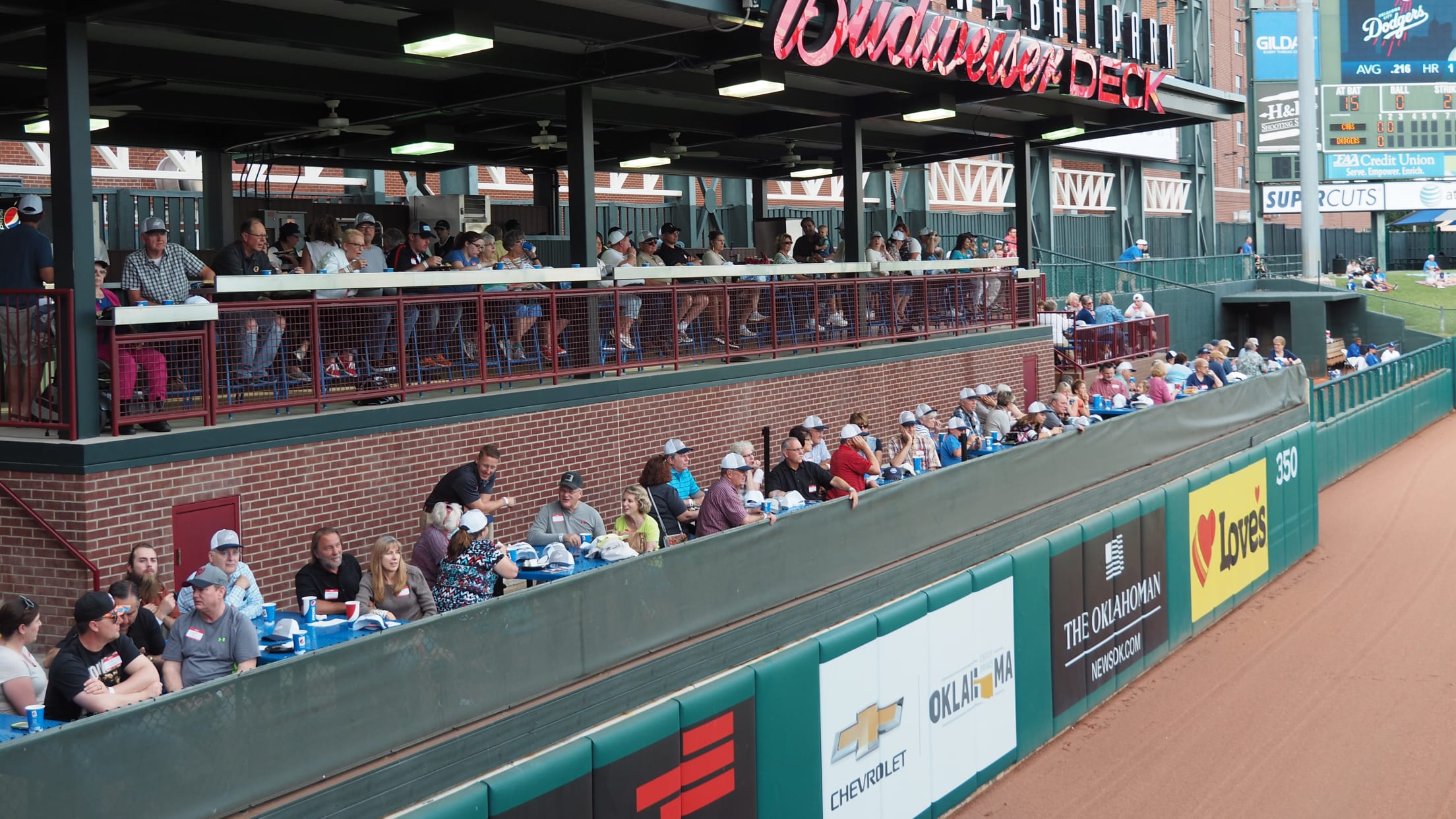 The Dodgers, of course, offer a full array of ballpark staples. On the beverage front, the team sells a variety of unique Stubborn Sodas flavors as well as Beer Bats. (These, of course, are plastic bat-shaped beverage receptacles filled with beer.) For dessert, you may want to consider a Churro Sundae with hand-scooped ice cream. 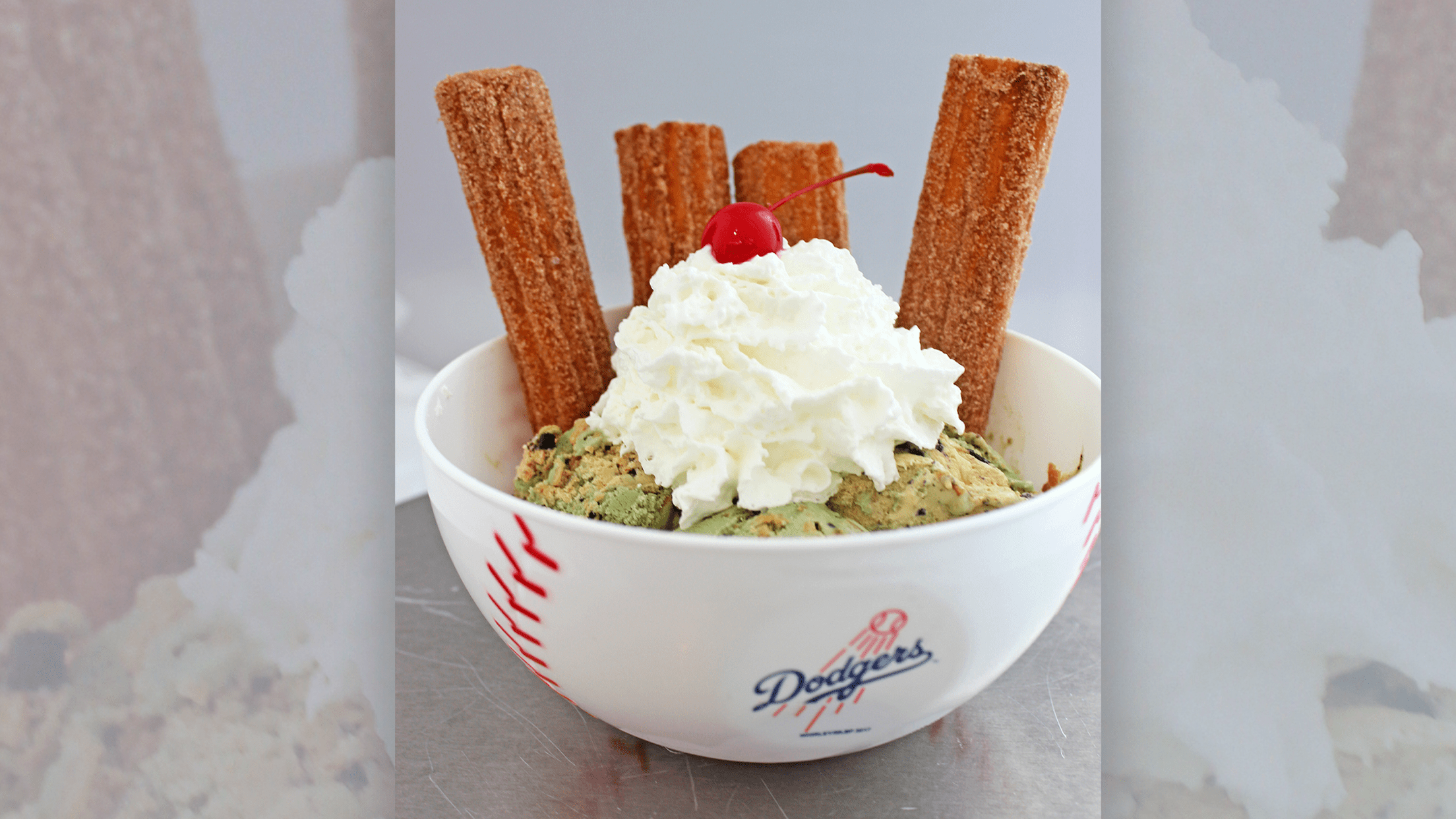 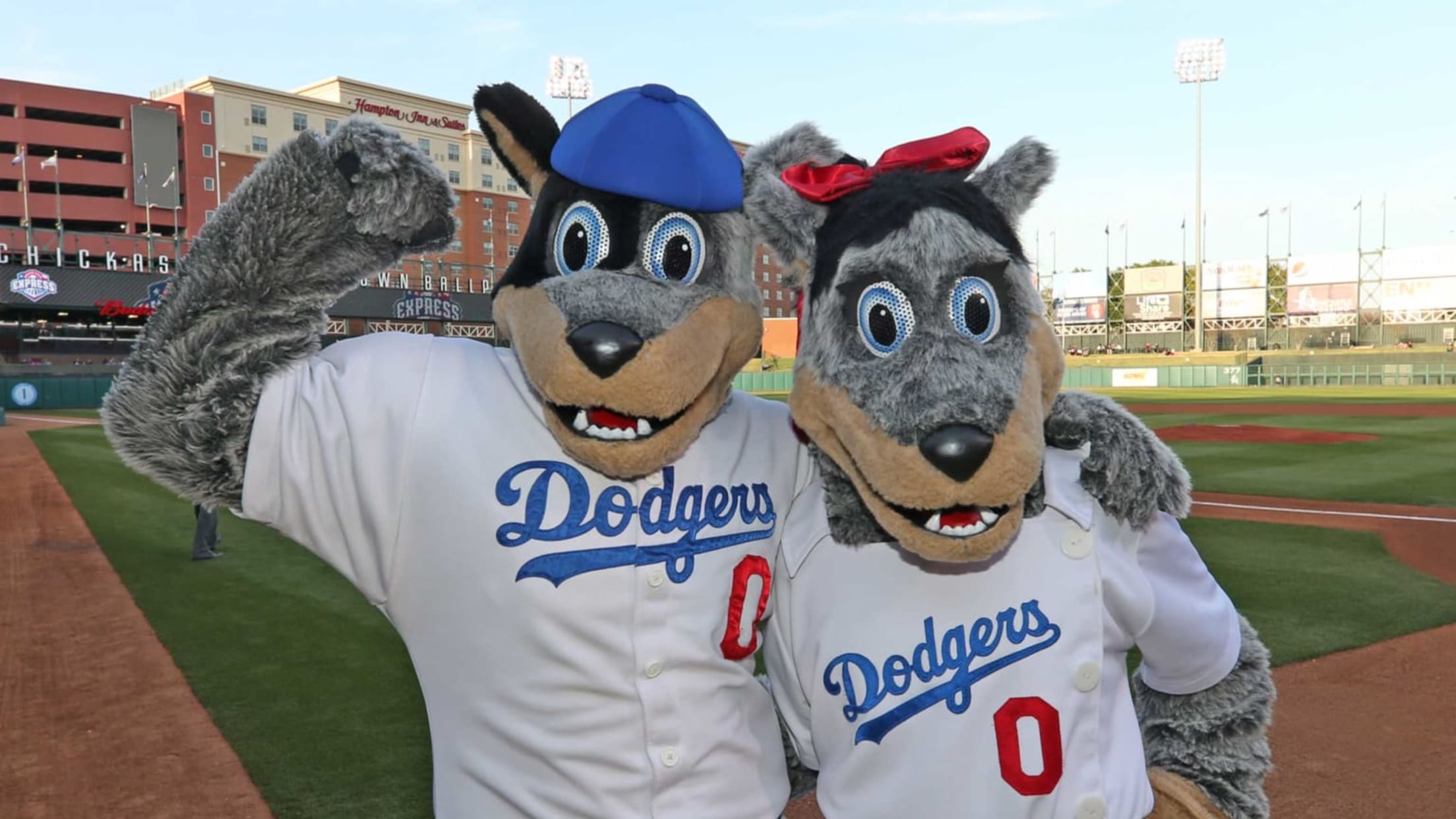 Brix and Brooklyn, a brother-sister duo, are cattle dog pups. Together they represent their ballpark's name and location (Brix) and the history of the parent club (Brooklyn). They arrived at the ballpark in 2015, in conjunction with Oklahoma City changing its name and affiliation to the Dodgers. The team was immediately "bow-wowed" by Brix and Brooklyn's energy and enthusiasm, and they've been ballpark and community staples ever since.

The Oklahoma City National Memorial and Museum, commemorating the victims of the 1995 bombing of the Alfred P. Murrah Building, is beautiful and devastating. The outdoor memorial includes a reflecting pool and the Field of Empty Chairs, in honor of the 168 people who were killed. The adjacent museum offers a chance to learn much more about that horrible day, and the ways in which Oklahoma City residents -- and America at large -- rallied together in its aftermath.

The massive Oklahoma National Stockyards -- "The World's Largest Stocker and Feeder Cattle Market" -- has live cattle auctions every Monday and Tuesday that are open to the public. The area surrounding the stockyards is evocative of the cattleman (and woman) lifestyle, with stores dedicated to cowboy hats, boots, and saddle repair.

Of course, the ballpark itself is in the Bricktown Entertainment District. In addition to myriad food and alcoholic beverage options, the area features public murals, plenty of open space and, perhaps most intriguingly, the American Banjo Museum.

Finally, check out the USA Softball Hall of Fame Complex. In addition to its titular hall of fame, the complex includes four playing fields and hosts a variety of national and international tournaments.

It should come as no surprise that the Cattlemen's Cafe, located in Stockyard City, serves all manner of steak. But this iconic restaurant -- "a favorite destination of anyone who's pulled on a pair of ropers" -- is also known for its euphemistically-named Lamb Fries (fried lamb testicles).

Lamb Fries at the Cattlemen's Cafe.

Leo's Barbecue, unassuming and friendly, is one of Oklahoma City's most revered barbecue establishments. The ribs in particular are spectacular, and every meal comes with a free slice of strawberry banana cake.

Mickey Mantle's Steakhouse is located on Mickey Mantle Drive, a short walk from the ballpark. 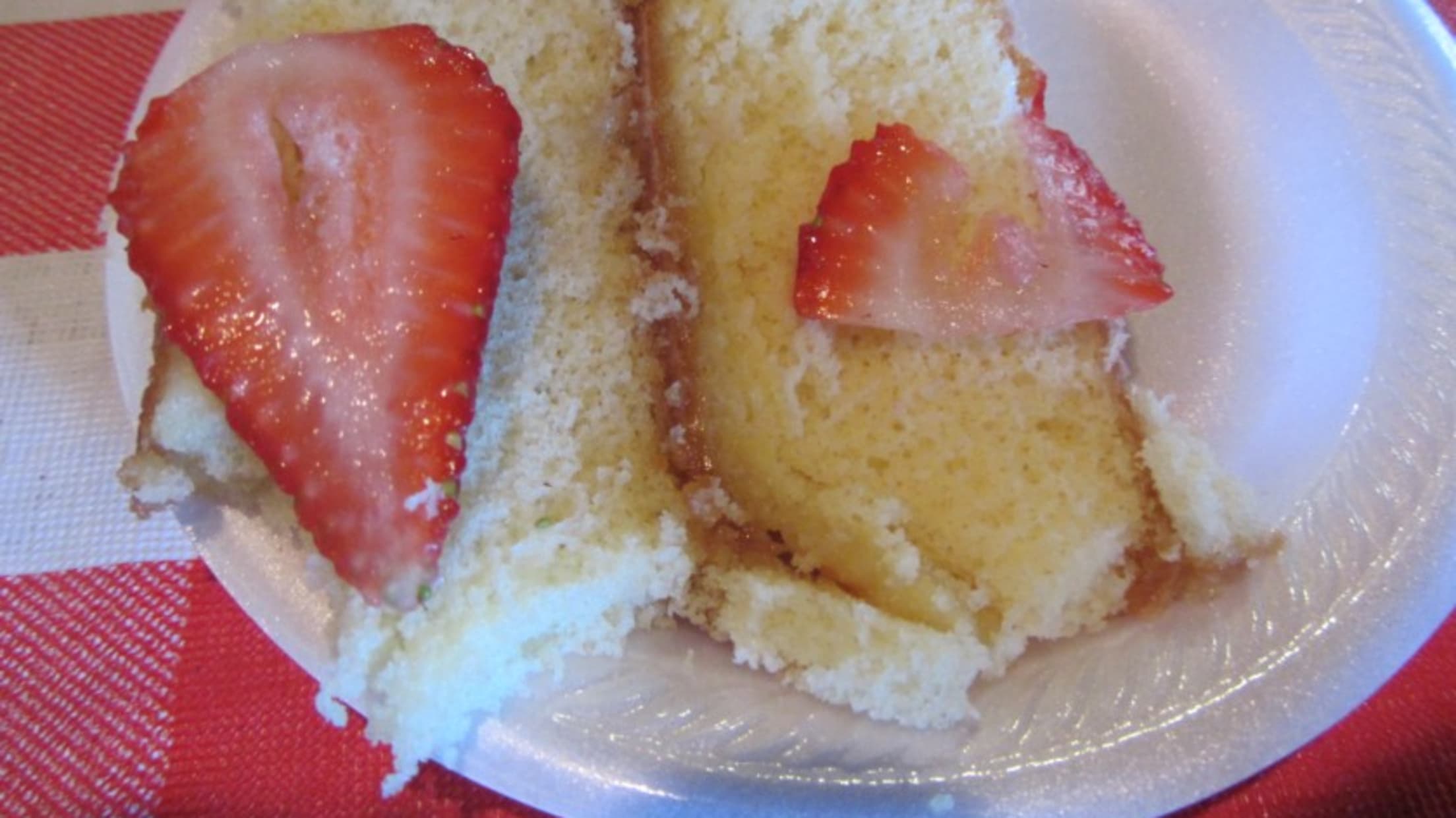 Hotel options abound, including several within walking distance of Chickasaw Bricktown Ballpark. These nearby establishments, generally on the pricier end of the spectrum, provide the opportunity to explore the Bricktown Entertainment District without worrying about parking (or driving home, should you overindulge at Toby Keith's I Love This Bar and Grill).

When this writer visited Oklahoma City in 2012, it was the first stop in a sprawling itinerary that also included the Tulsa Drillers, Northwest Arkansas Naturals, Springfield Cardinals, Memphis Cardinals, Jackson Generals (no longer in Minor League Baseball) and Arkansas Travelers. Other options include the Wichita Wranglers (to the north), Amarillo Sod Poodles (to the west) and the Frisco RoughRiders (to the south).

The Oklahoma City Dodgers are the top team in Los Angeles' farm system, one rung above the Tulsa Drillers (the only other Minor League team in the state of Oklahoma). The Midland (Michigan) Loons are at High-A, with the Rancho Cucamonga Quakes at Low-A. 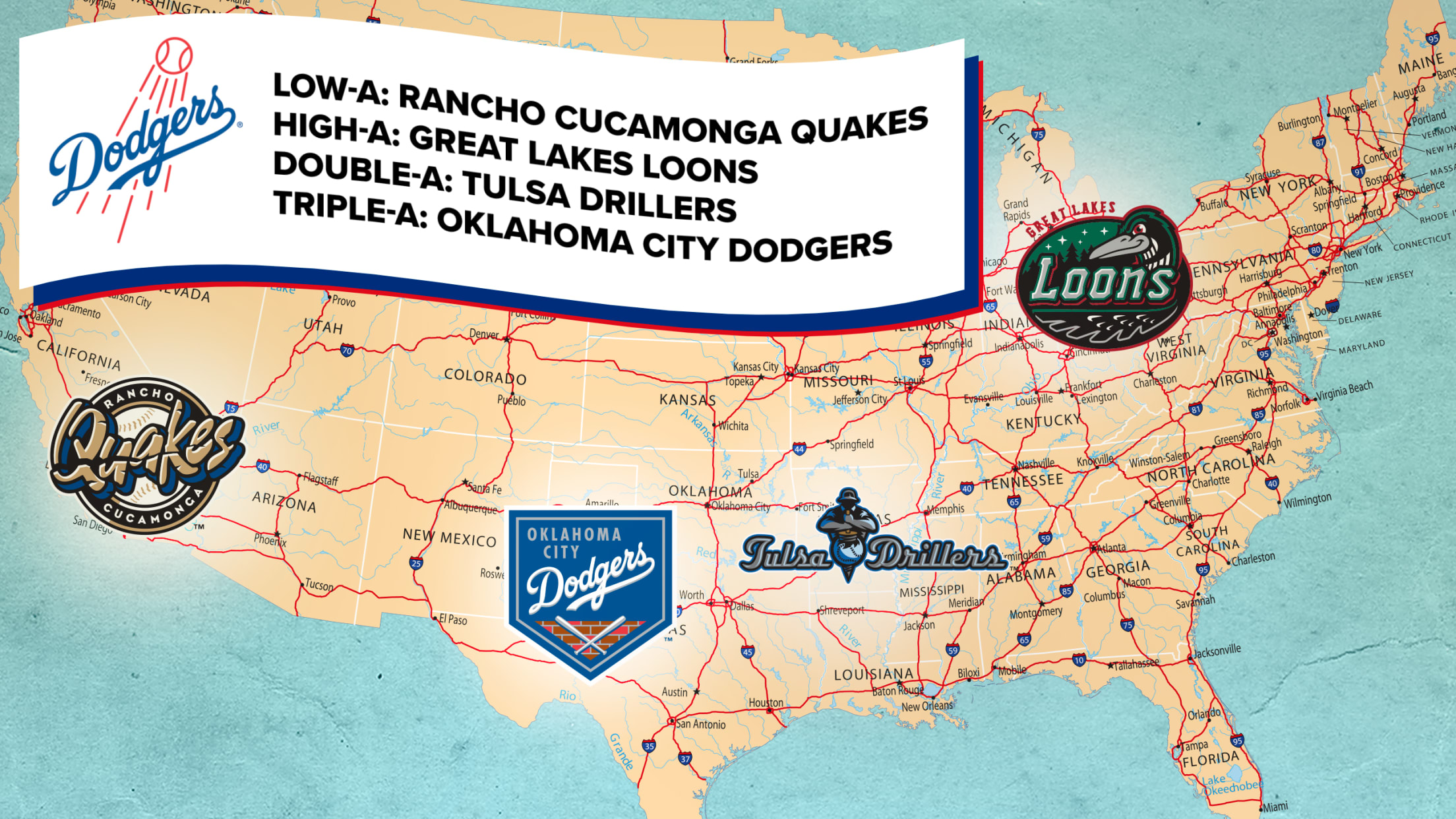