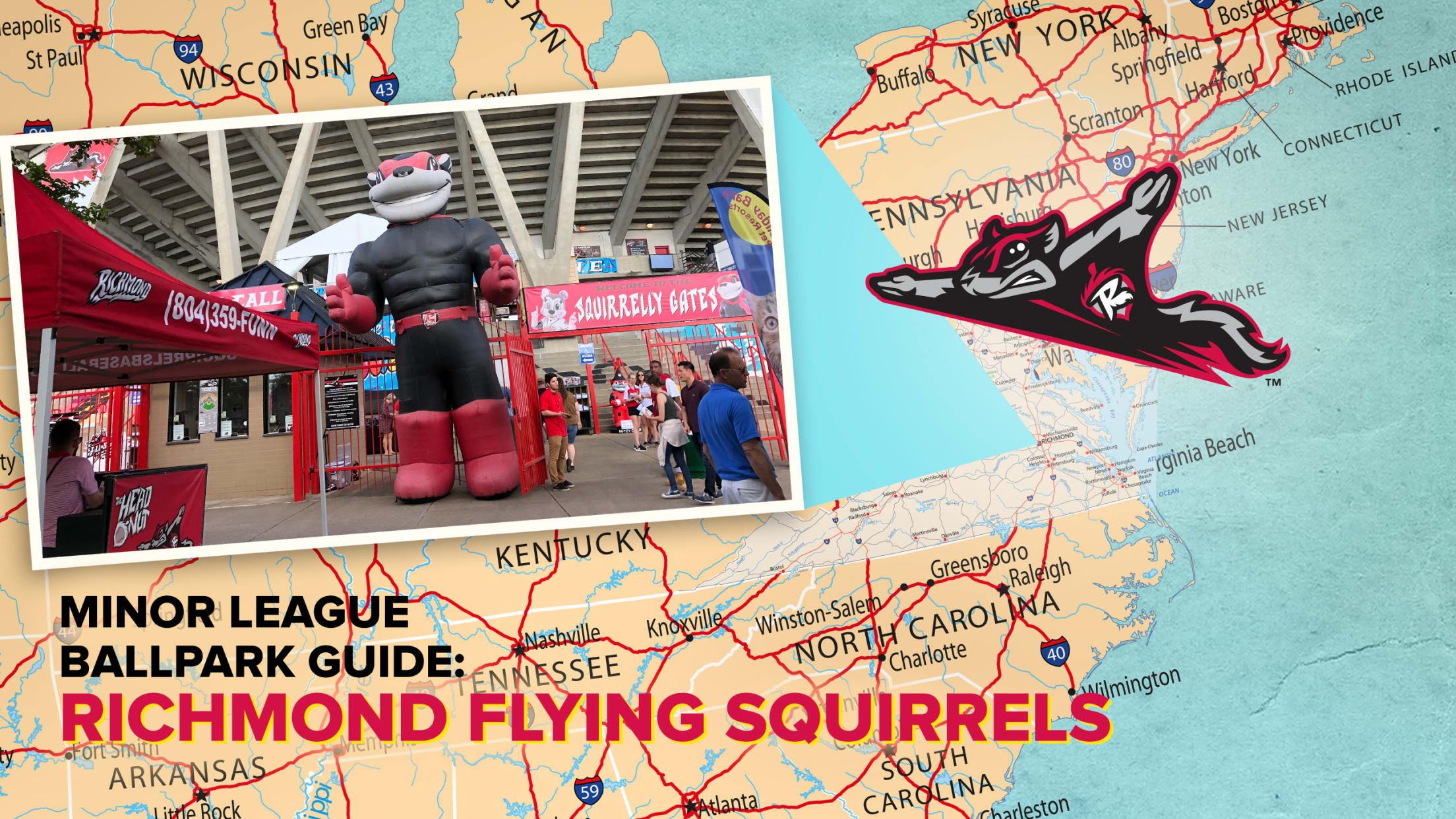 Welcome to Richmond's The Diamond, a hulking concrete edifice that is, nonetheless, a charming place to spend an evening. The Flying Squirrels, who call it home, have transformed it into a colorful land populated by musclebound squirrels, racing celebrity nuts and exuberant executives.

Professional baseball in Richmond dates all the way back to 1884, and a Minor League team has called the city home in nearly every season since. The Flying Squirrels arrived in 2010, having relocated from Norwich, Connecticut. This move was made possible due to the departure of the Triple-A Richmond Braves, who were established in 1966 and relocated to Lawrenceville, Georgia, following the 2008 season (that team is now known as the Gwinnett Stripers). 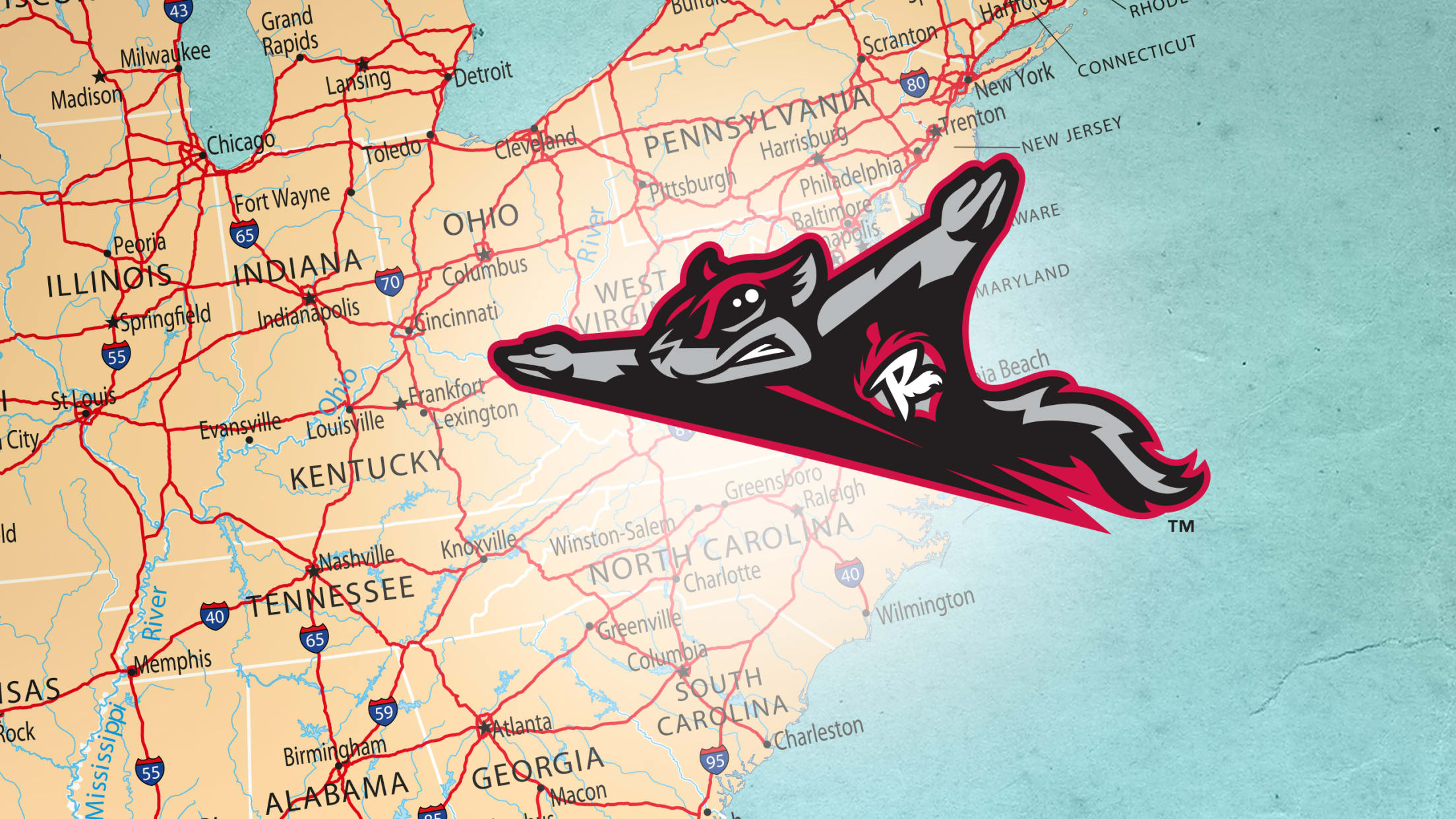 Flying Squirrels was the winning selection in a "Name the Team" contest, chosen primarily because it would be popular with kids and families. (It doesn't hurt that squirrels love nuts, because the state of Virginia is chock full of peanuts.) The team, a San Francisco Giants affiliate since its 2010 inception, operated in the Eastern League through 2020. In 2021, as part of a larger reorganization of Minor League Baseball, they shifted to the Double-A Northeast. 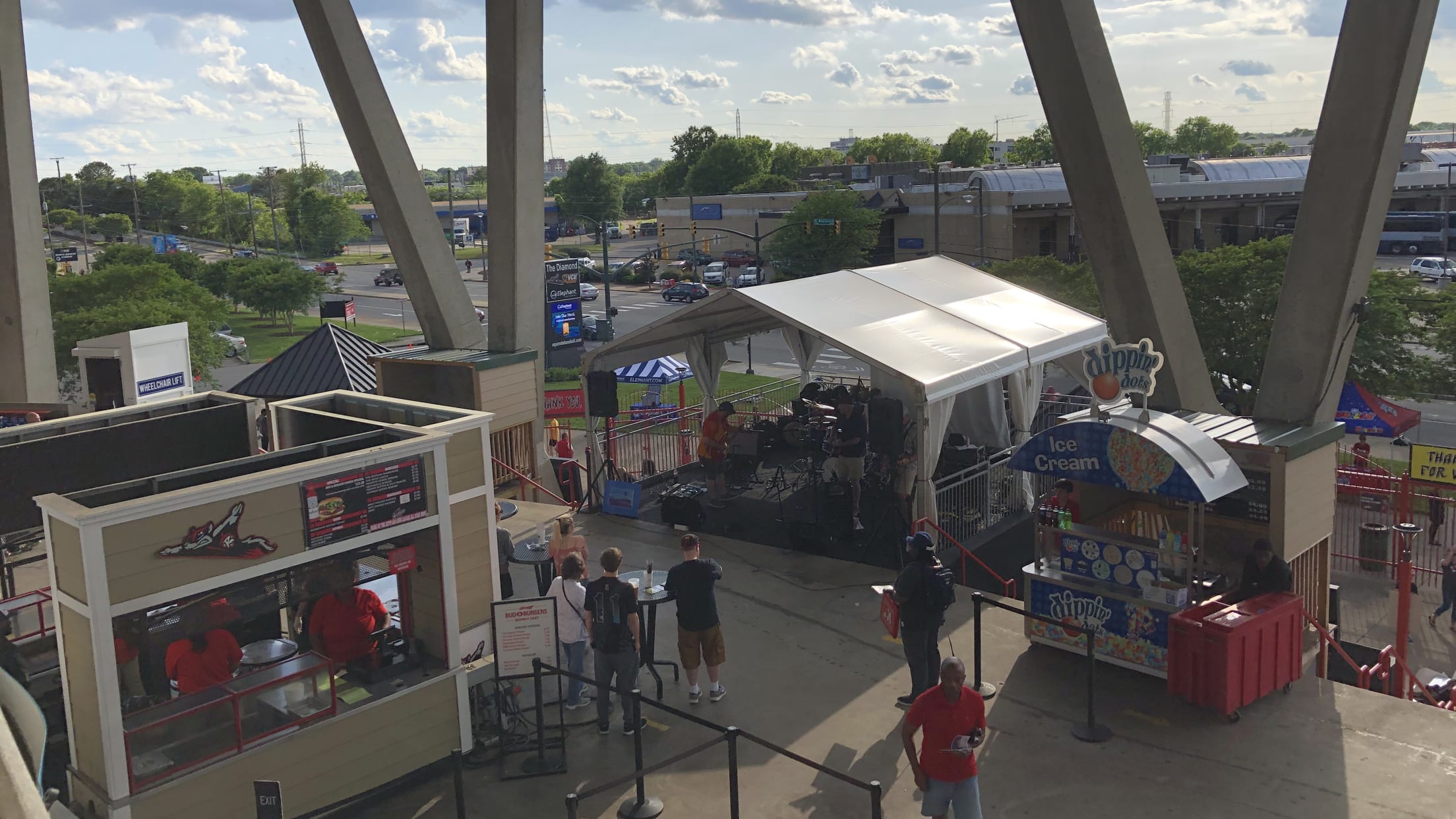 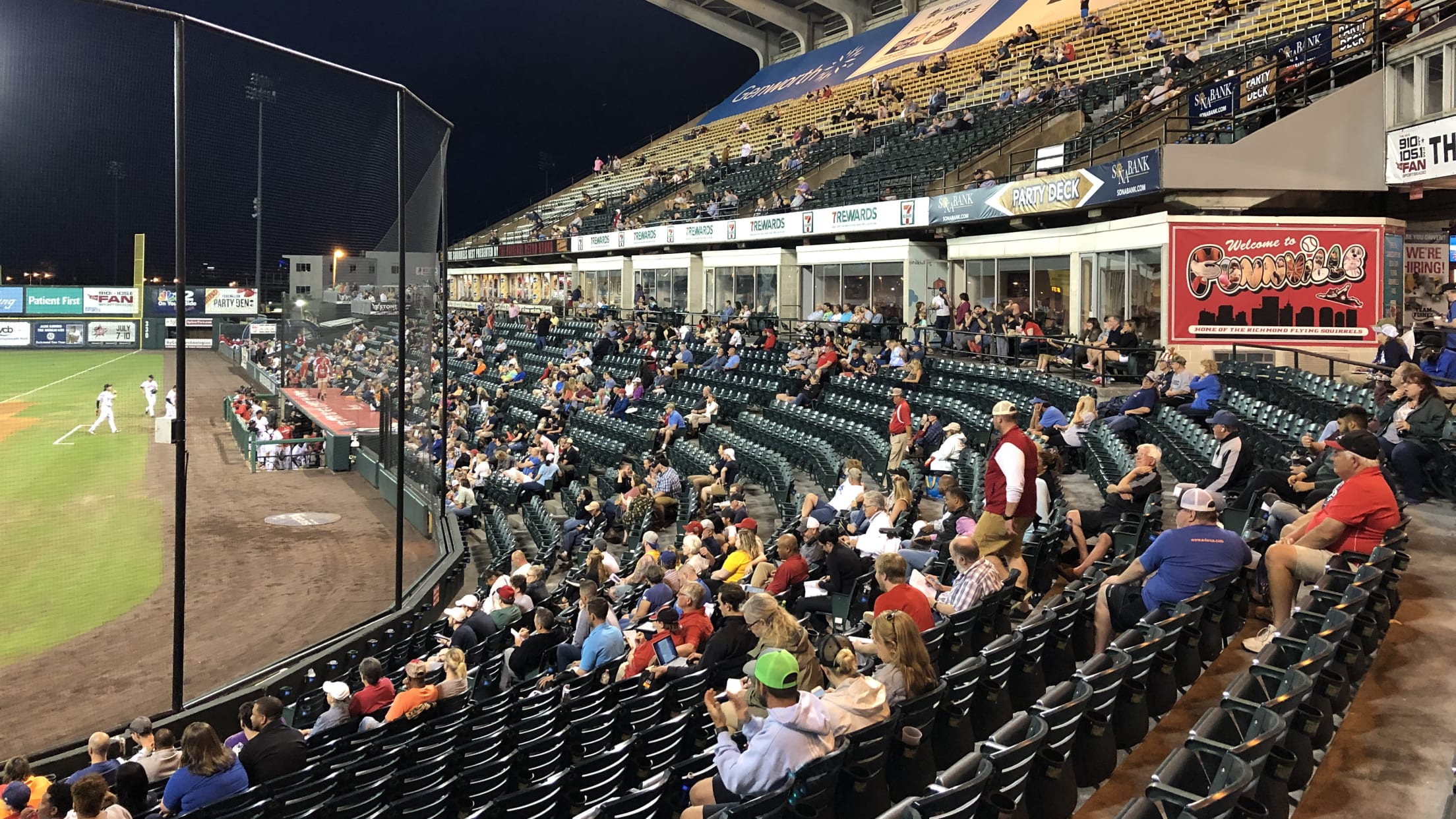 The Diamond, located in North Richmond, is a relic from a bygone era: the '80s. It is a towering, relentlessly gray concrete behemoth, the Minor League Baseball equivalent of the utilitarian multisport complexes that once dominated the sports landscape (think Philadelphia's Veterans Stadium or Riverfront Stadium in Cincinnati). It opened in 1985 and hosted the International League's Richmond Braves through 2008. That Braves' departure was largely motivated by the desire to play in a more modern facility. When the Flying Squirrels arrived in 2010, it was with the caveat that the Diamond would be a short-term home as they worked with the city to build a new ballpark. Over a decade later, after many twists and turns and false starts, the quest for a new ballpark continues. 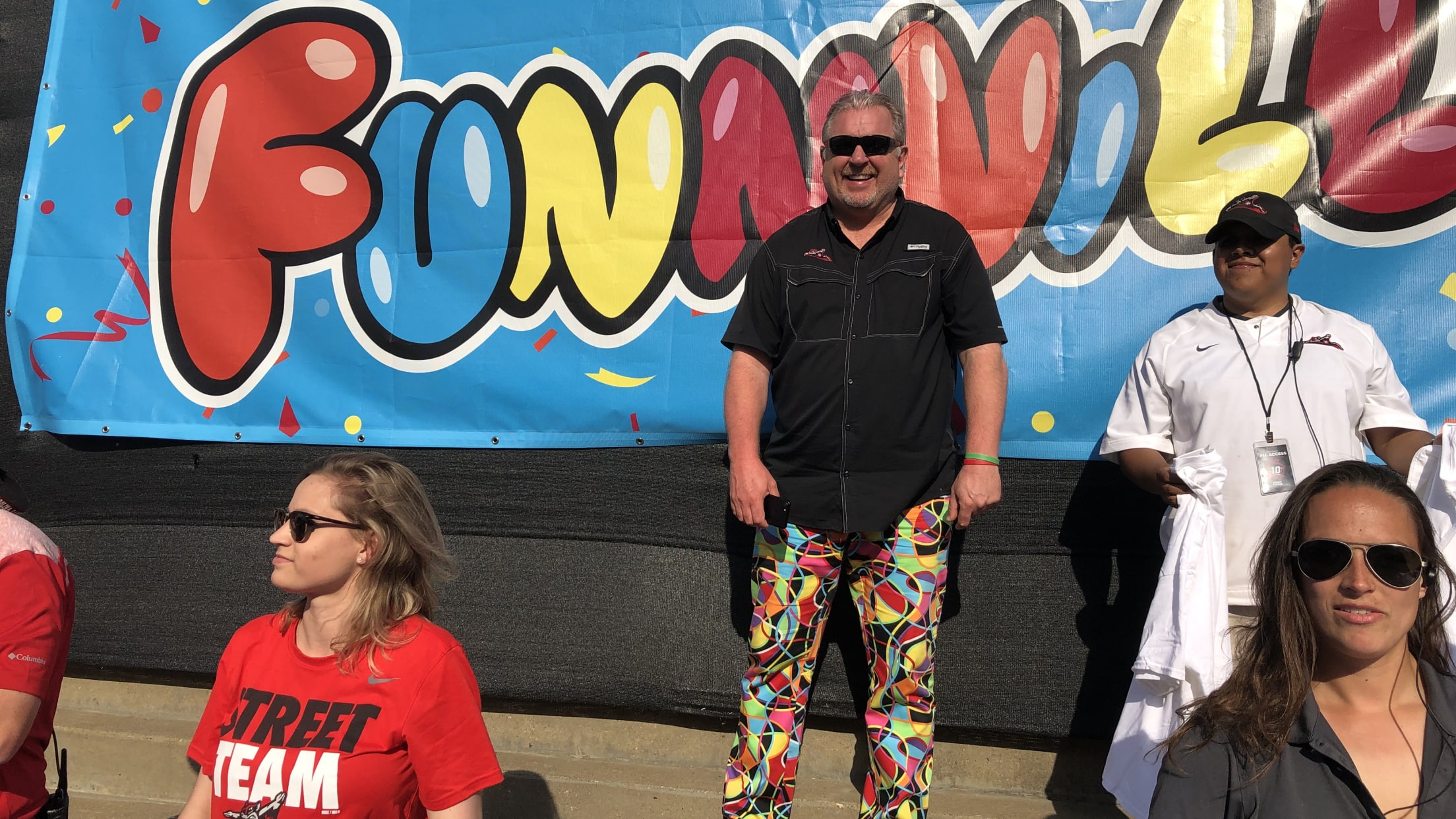 The Diamond is "Funnville," presided over by Flying Squirrels vice-president and COO Todd "Parney" Parnell.

Nonetheless, The Diamond is a festive place to see a game and its outmoded status now makes it a unique destination that inspires nostalgia among fans who grew up in an era where facilities of its type were legion. The Flying Squirrels' ownership and front office have gone all-in on making The Diamond as colorful and lively as possible, doing their best to spruce up a monochromatic and foreboding structure. Live bands are often playing on the concourse, which is decorated throughout with murals by local artists. Large crowds are commonplace, and the Flying Squirrels often find themselves at or near the top of the league attendance leaderboard. Make sure to stay in your seat for the between-inning Mixed-Nut Race, featuring Johnny Cashew, John Walnut, the Almond Brothers and, simply, Peanut. 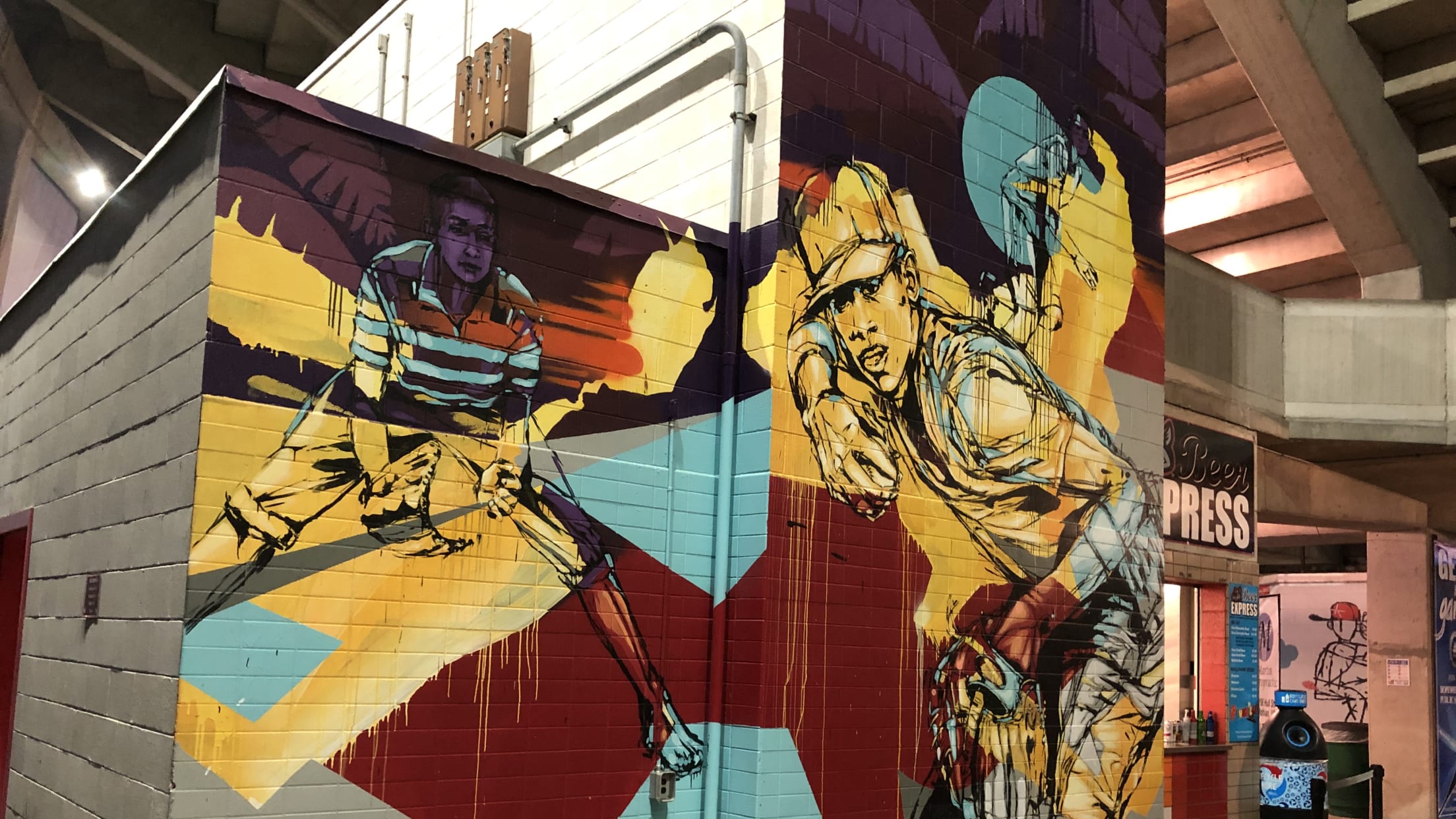 The area immediately surrounding The Diamond is congested and unfriendly to foot traffic. On the plus side, parking is ample and it is easily accessible from I-95. The Diamond is part of Scott's Addition, an historic district with some of Richmond's most popular restaurants. Drive for a few minutes into the heart of the neighborhood, and the scenery changes dramatically. 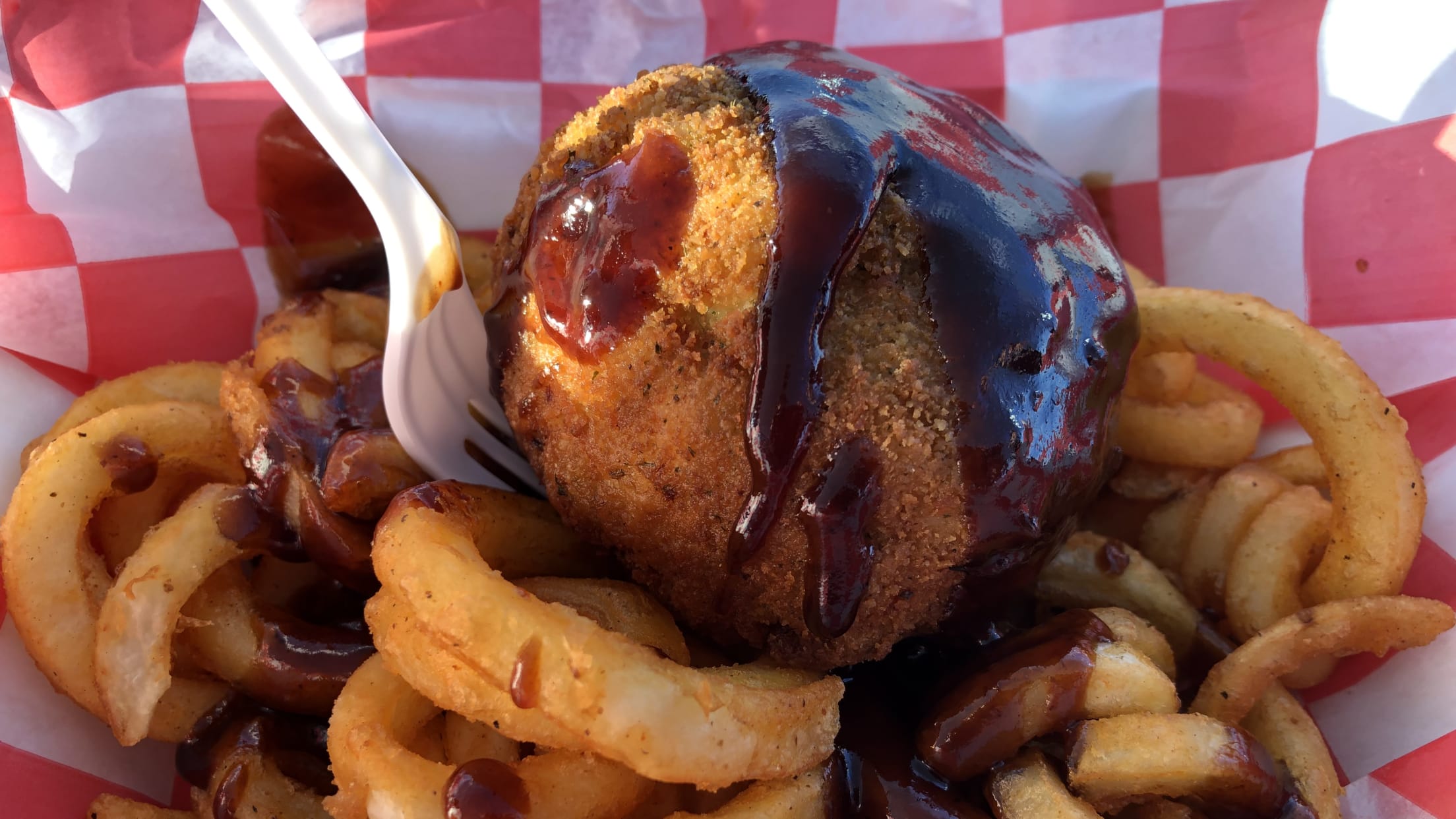 The Diamond has two main concession stands, on the first-base and third-base sides, as well as a variety of kiosks scattered about the concourse. Squirrely Fries, the team's version of curly fries, are one of the ballpark's most popular offerings. Specialty offerings abound. Highlights in recent seasons have included Deep-Fried Mac & Cheese Brisket Balls, the Bacon Me Crazy Hot Dog (topped with bacon jam, bacon bits and strips of bacon) and a PB&J Burger slathered with peanut butter on one side and jelly on the other. 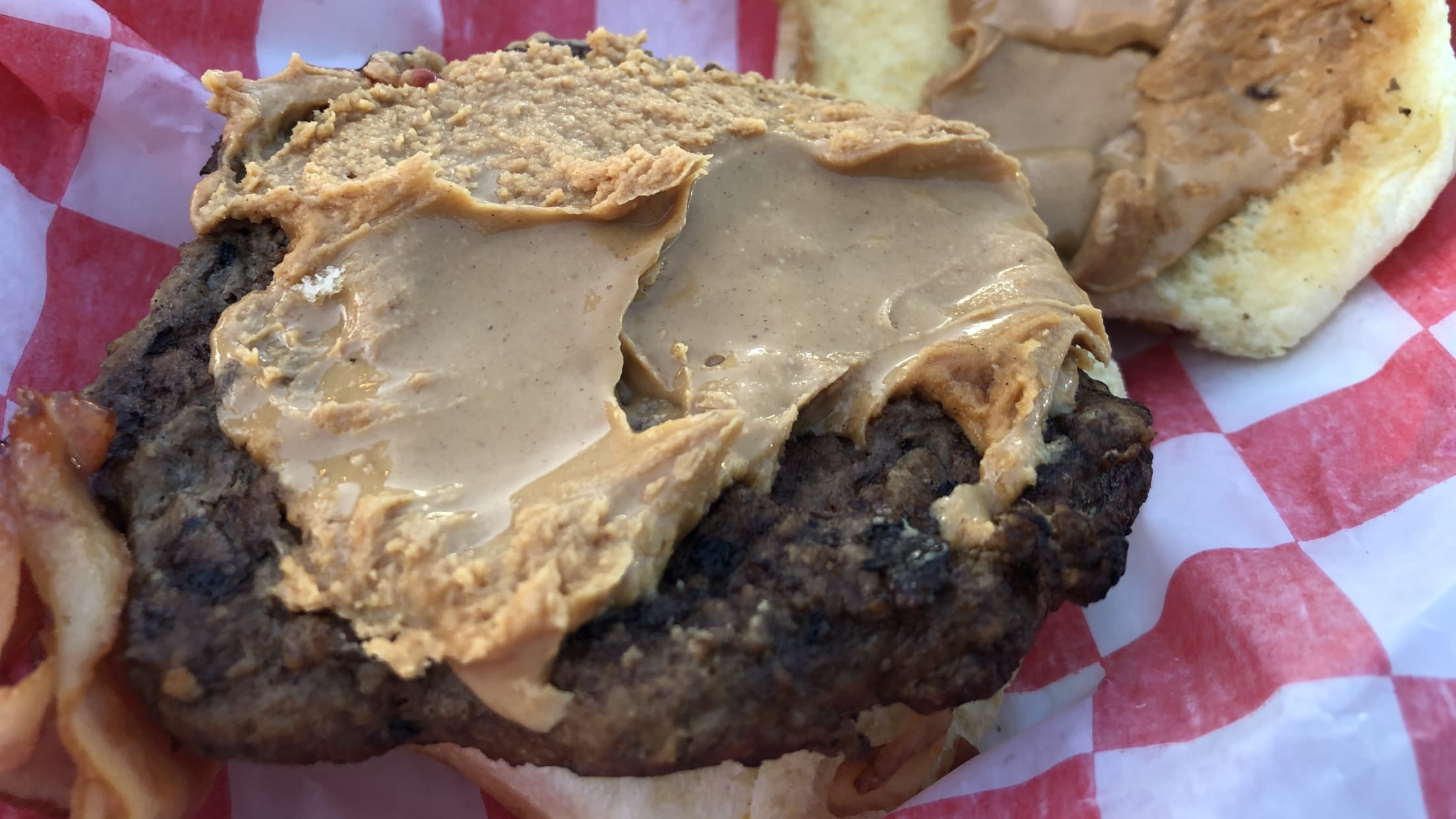 The "PB" side of the Flying Squirrels' PB&J Burger.

The Flying Squirrels also offer a wide array of alcoholic offerings, highlighted by a selection of nearly two dozen beers brewed within a 60-mile radius of The Diamond. These local include the team's own Rally Cap beer, brewed by Center of the Universe (a brewery founded by former Major League pitcher Chris Ray). 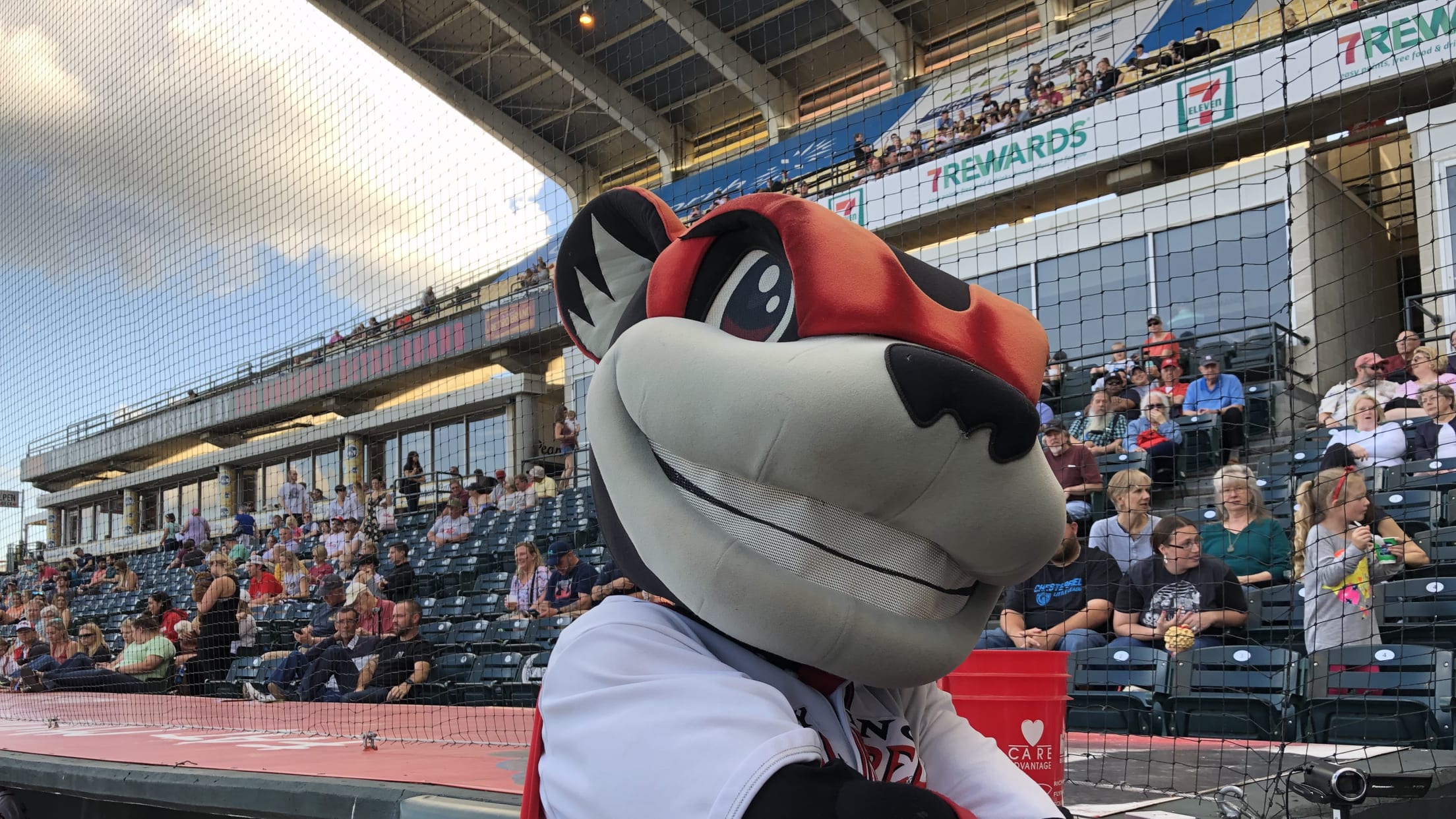 Many mascots have bodies that are, shall we say, rotund. Not Nutzy, a muscular superhero flying squirrel who has clearly put in many hours at the gym (or wherever it is that squirrels work out). Although Nutzy may look stern and authoritative at first glance, he is fun-loving, friendly and always up for a selfie. Just don't tug on his cape.

The James River Pipeline Walkway is a unique outdoor destination, offering the chance to spot local wildlife while seeing Richmond from new vantage points. The walkway, accessed via a metal ladder, is just above water level. Speaking of the outdoors, Maymont is an idyllic 100-acre park with multiple gardens, waterfalls and its own mansion.

Richmond's rich and often tumultuous history can be explored via its many museums and historical sites. These include, but are far from limited to, the American Civil War Museum, Black History Museum, The Virginia Museum of Fine Arts and the Poe Museum (Edgar Allen Poe's literary career got it start in the city). While you're at it, pay a visit to Historic St. John's Church. It was here that Patrick Henry uttered the immortal phrase "Give me liberty or give me death."

The neighborhood of Scott's Addition, located in very close proximity to The Diamond, is home to exemplary restaurants such as the strangely punctuated LUNCH.SUPPER! and ZZQ. The former offers a wide-ranging menu of hearty comfort food and higher-end Southern cuisine; the former, as its name more or less implies, is a barbecue joint.

Richmond's oldest restaurant is the New York Deli, located south of Scott's Addition in Carytown. This establishment, operating out of the same location since 1934, is the home of the Sailor Sandwich (pastrami, Swiss cheese, grilled knockwurst and spicy mustard). Make sure to get your photo taken in the vintage black and white photo booth.

Richmond is also home to nearly three dozen craft breweries. Hardywood and Center of the Universe (makers of the Flying Squirrels' Rally Cap beer) are located a proverbial hop, skip and a jump from The Diamond.

The Flying Squirrels are one of five Minor League teams in the state of Virginia. The Salem Red Sox and Lynchburg Hillcats are located to the west, with the Fredericksburg Nationals to the north and Norfolk Tides to the east. The state is also home to three summer-collegiate Appalachian League teams -- the Bluefield Ridge Runners, Danville Otterbots and Pulaski River Turtles. The Flying Squirrels could also be incorporated into a road trip that includes Maryland's teams: the Aberdeen IronBirds, Bowie Baysox and Delmarva Shorebirds. And, of course, North Carolina and its bevy of Minor League Baseball (10 teams!) is only a state away.

The Road to San Francisco

The Giants' system is, in a word, sprawling. The team's prospects start out in San Jose before moving to Eugene, Richmond, Sacramento and, finally, San Francisco. 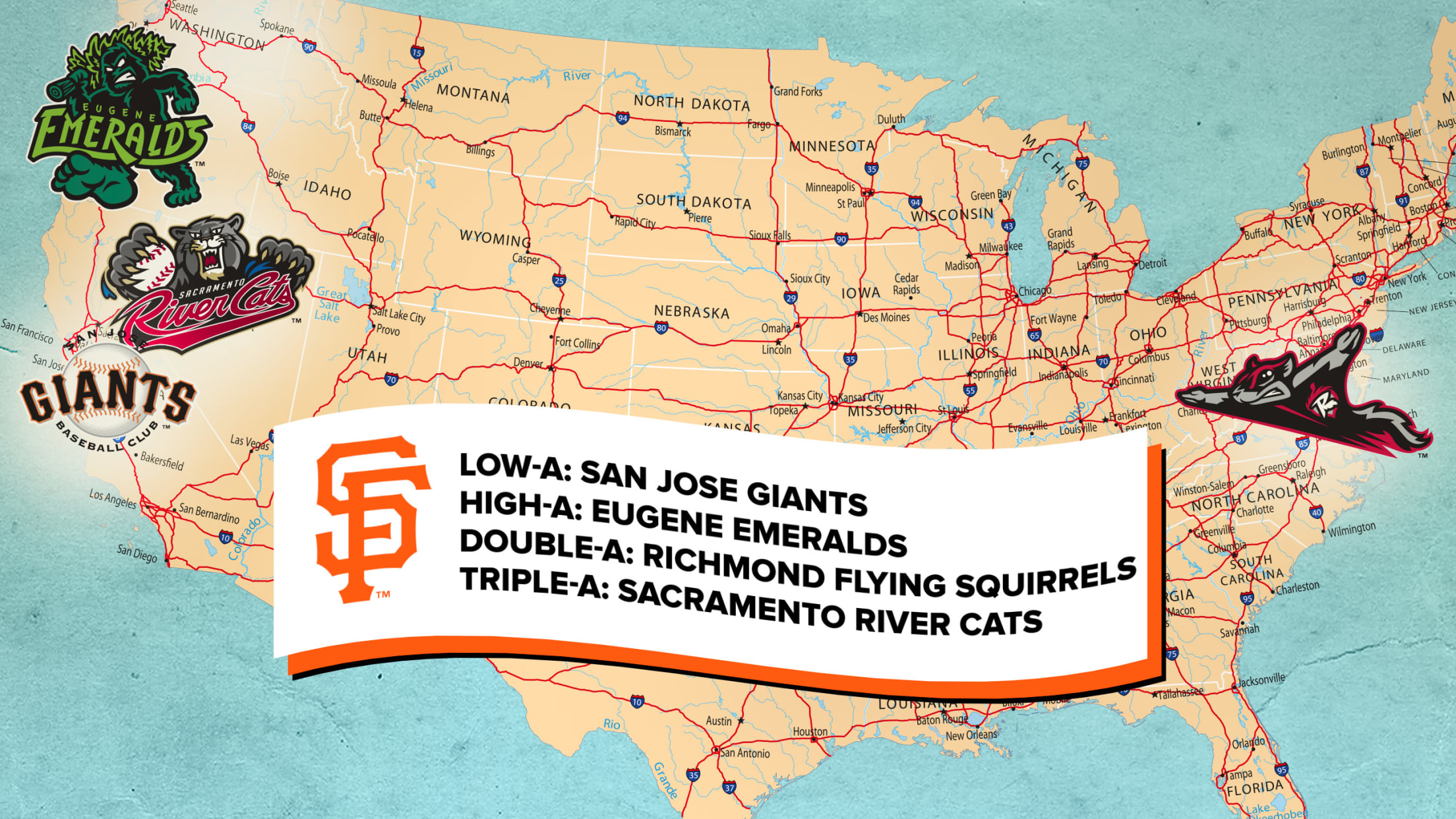