The inclusive, wheelchair-accessible play environment is "one-of-a-kind in the country"

PITTSBURGH -- For the last six or seven months, Sean Casey would drive into the Upper St. Clair Community & Recreation Center in Boyce Mayview Park, pull up to the Pirates Charities Miracle League Field of South Hills and look at the construction zone beyond the outfield fence.

"Oh, man, we can't wait until we get that open," Casey recalled saying.

"Seeing all the kids out there right now, and it being so packed and all that stuff, that's really, really cool," said Casey, who grew up in the Upper St. Clair Township. "To see it become reality and to see people finally playing on it really hits home."

Casey's Clubhouse and Pirates Charities joined together in 2010 to build the field. The plan all along, Casey said, was to build an accessible playground as well.

"Anything that we could do to attract kids of all abilities is great for everybody," said Casey, a three-time All-Star now serving as an analyst for MLB Network, "and it's really great for our community."

The complex hosted its first Miracle League season in 2012, offering wheelchair-accessible baseball facilities for children and their families.

Casey and his wife, Mandi, co-founders of the Casey's Clubhouse charity, helped lead the grand opening ceremonies Saturday morning along with Pirates president Frank Coonelly and several other local officials.

Addressing the crowd before the ribbon-cutting ceremony, Coonelly said "The Clubhouse" was "the absolute coolest playground you've ever seen."

That's especially true of the view from home plate, made to resemble that of PNC Park. The playground was built with several familiar landmarks in downtown Pittsburgh in mind. 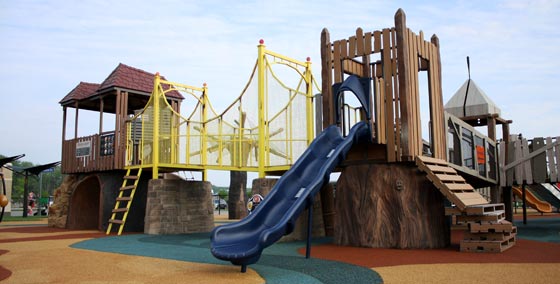 There's a miniature Roberto Clemente Bridge, a tower designed like the Highmark building in downtown Pittsburgh and another like PPG Place.

"We just figured it would be something unique and something special. We feel like it's one-of-a-kind in the country," Casey said. "All the pieces were made for this place. It's very unique, and we feel like our kids deserve something like this."

"Since 2009, Pirates Charities has made a concerted effort to be a catalyst for the growth of the Miracle League programs throughout our region, as well as in our spring training home of Bradenton, Florida," Pirates chairman Bob Nutting said in a statement. "These projects are near and dear to our hearts as we believe every child and adult should have the opportunity to experience the game we love so much with their family, friends and peers, regardless of what challenges they may face."

Adam Berry is a reporter for MLB.com. Follow him on Twitter at @adamdberry.
Read More: Pittsburgh Pirates