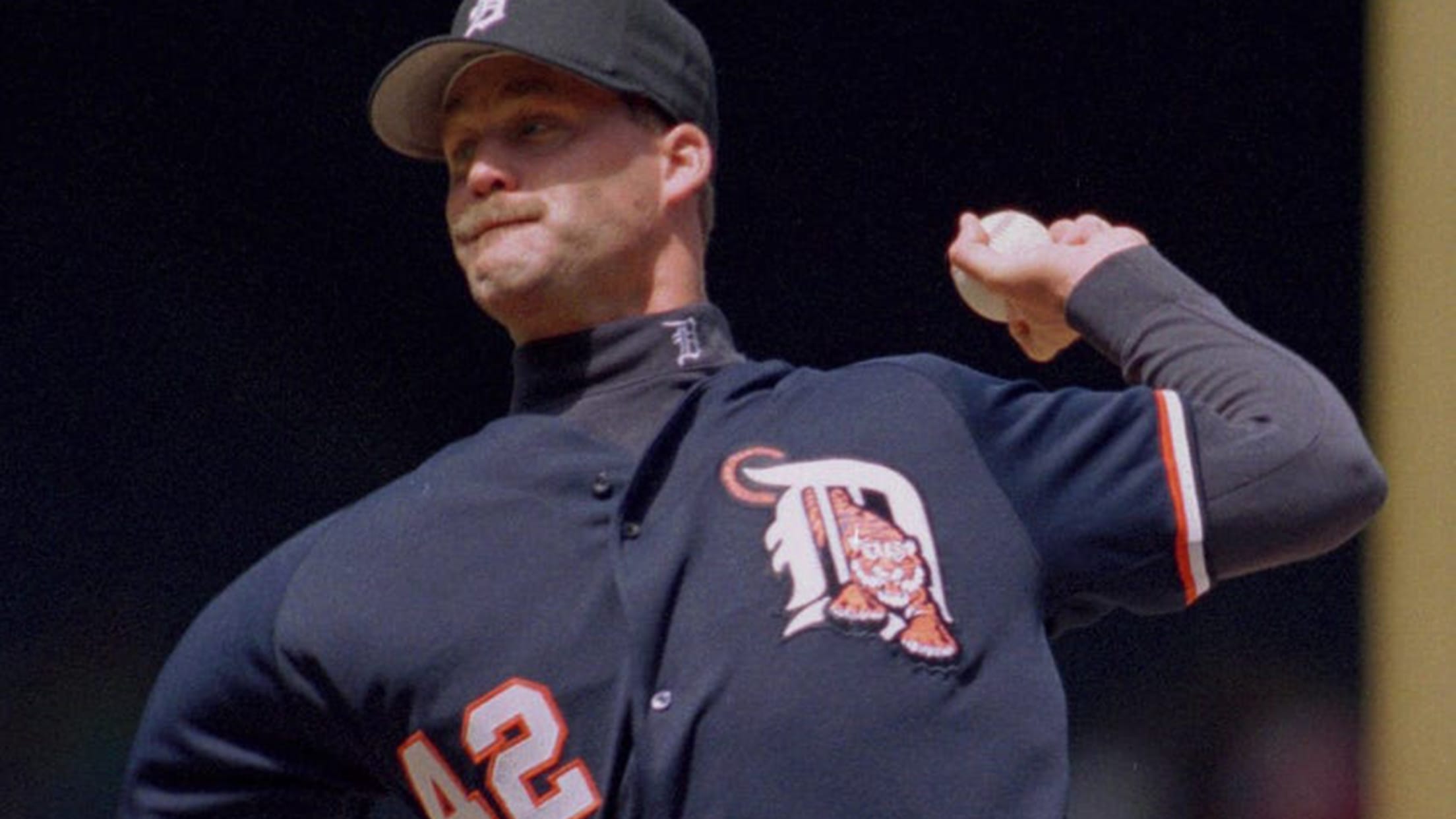 'Never saw them again': The tale of the Tigers' blue jerseys 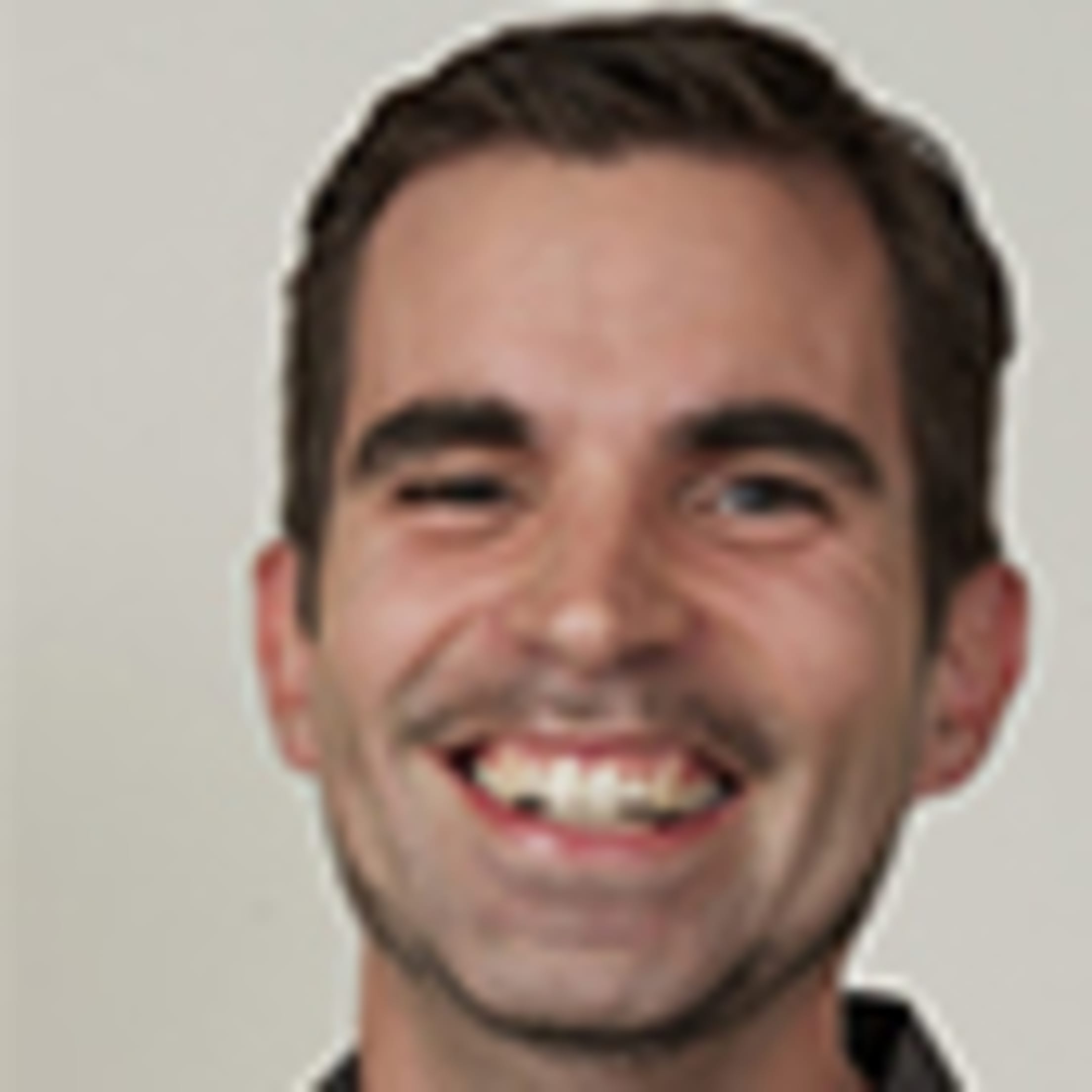 The navy blue jersey hangs in Ron Reiss’ closet, waiting for the day when baseball returns and he can wear his Tigers fandom again. It’s a little worn and looks like something from a video game or an alternate universe. The Olde English D on the left chest has a Tiger walking through it, an alternate logo the Tigers had in the mid-90s. On the opposite chest is the jersey number, something the team never had on its home jerseys.

[A version of this story was originally published in May 2020.]

Reiss thought it was a fashion jersey or batting practice gear when he found it on sale on eBay years ago and started wearing it to games.

“I originally paid $25 or $30 for it because it was number 35. That was my lucky number,” Reiss recalled. “But it wasn't until 10 or 12 years ago that [then-Tigers marketing director] Ron Wade mentioned that my jersey was an authentic that was worn, and that some private collector was trying to buy them all because they were scarce.”

Bill Henderson is one such collector. Not only does he search for unique items to add to his treasure trove of jerseys, he has written a book about uniform oddities. Among the Philadelphia resident’s prized items is the all-burgundy Phillies jersey the team wore for one game in 1979.

But even Henderson didn’t know what he had when a dealer in Wisconsin put a navy blue Tigers jersey on sale 20 years ago. 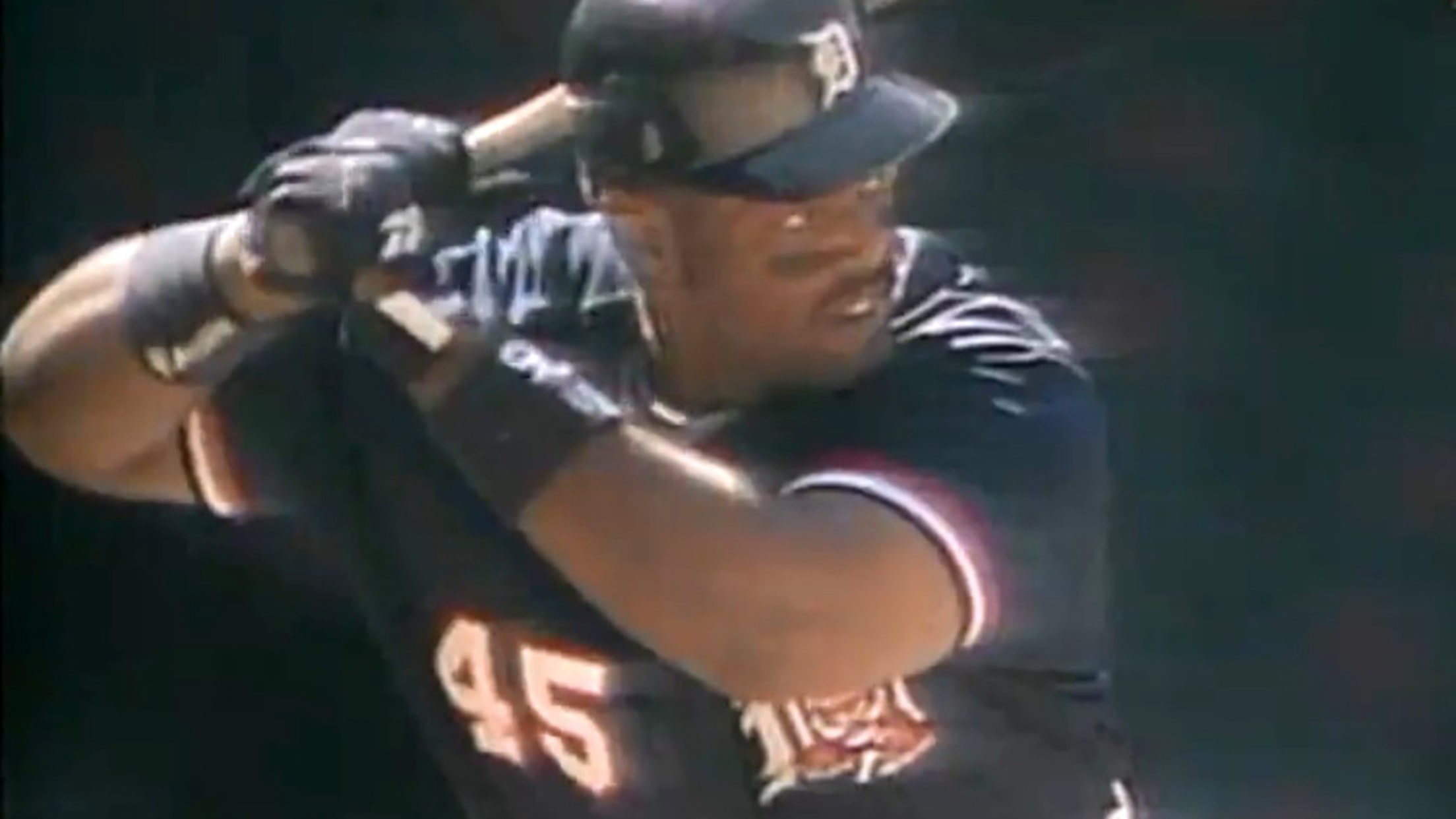 It was supposed to be for a year. It lasted a day. And for generations of Detroit fans who have known the Tigers for their classic home jersey, it’s a forgotten piece of history, even to the players who wore it.

“It was sort of a quirk in the history of the club,” former Tigers president/CEO John McHale Jr. said.

"It represents a strange departure."

For more than 85 years, the Tigers have been known for the white home jersey with the Olde English D on the chest, a look as familiar to baseball as those of the Yankees and Red Sox. When Detroit strayed for the 1960 season and wore a script Tigers home jersey, fans complained. When John Fetzer took over as controlling owner in '61, he brought the Olde English D jerseys back.

The look has become so familiar that some fans revolted two years ago when the Olde English D changed on the jersey to match the one on the cap. The look is so synonymous with the club, so long-standing, that it renders throwback jerseys moot.

When MLB had a Turn Ahead the Clock jersey promotion in 1999, the Tigers kept their traditional home look, shortened the sleeves and used a futuristic font for the name and number on the back. They wore the same look for Spring Training games as in the regular season until a few years ago.

“The home uniform and the Olde English D, that's always been a classic,” Hall of Famer Alan Trammell said. “Even when I see it today, I smile, and I hope they never change it.”

Aside from special events like Negro Leagues Weekend or Fiesta Tigers, they haven’t deviated. But in May 1995, they came the closest to a change that they’ve come in modern times. Call it once in a blue moon.

I just thought this was a unique-looking thing. ... And then when I started doing the research, I found it was only worn for one game.

“This came about at a time when licensing is exploding in all sports, but especially in MLB, you have a lot of teams that are developing alternate looks,” said Todd Radom, a graphic designer and author who has created logos for pro sports teams and leagues for years.

“In every sport, designers like me -- in conjunction with teams and leagues -- had this brand-new toy with computer technology. So the explosion of more complex, progressive graphics took place, and when you combine that with a more tacit appeal to youth, it makes for a perfect-storm moment, regardless of team.”

Across baseball, several teams were going beyond the home whites and road grays and delving into alternate and third-color uniforms. The Tigers were holdouts. They’d tried different looks for batting practice jerseys for a few years. They had bright orange jerseys with blue lettering and numbers for batting practice on the road in 1993.

They also had blue jerseys for batting practice at home starting in 1994. Those didn’t have numbers on the front, but they had orange, white and blue striping on the top, as well as the Tiger walking through the Olde English D on the front.

“It was a mesh navy blue jersey,” said Travis Fryman, a Tigers infielder from 1990-97, “and we all loved them because they were so light and comfortable. The old polyester stuff in my day was not very comfortable.”

The batting practice jerseys seemed to serve as inspiration for the game jersey to follow.

No, Radom didn’t design the jerseys, but he chronicled them in his recent book, "Winning Ugly: A Visual History of the Most Bizarre Baseball Uniforms Ever Worn."

“As alternate jerseys go, this one is not bad,” Radom wrote, “but it represents a strange departure from the Tigers’ tried-and-true uniform routine.” 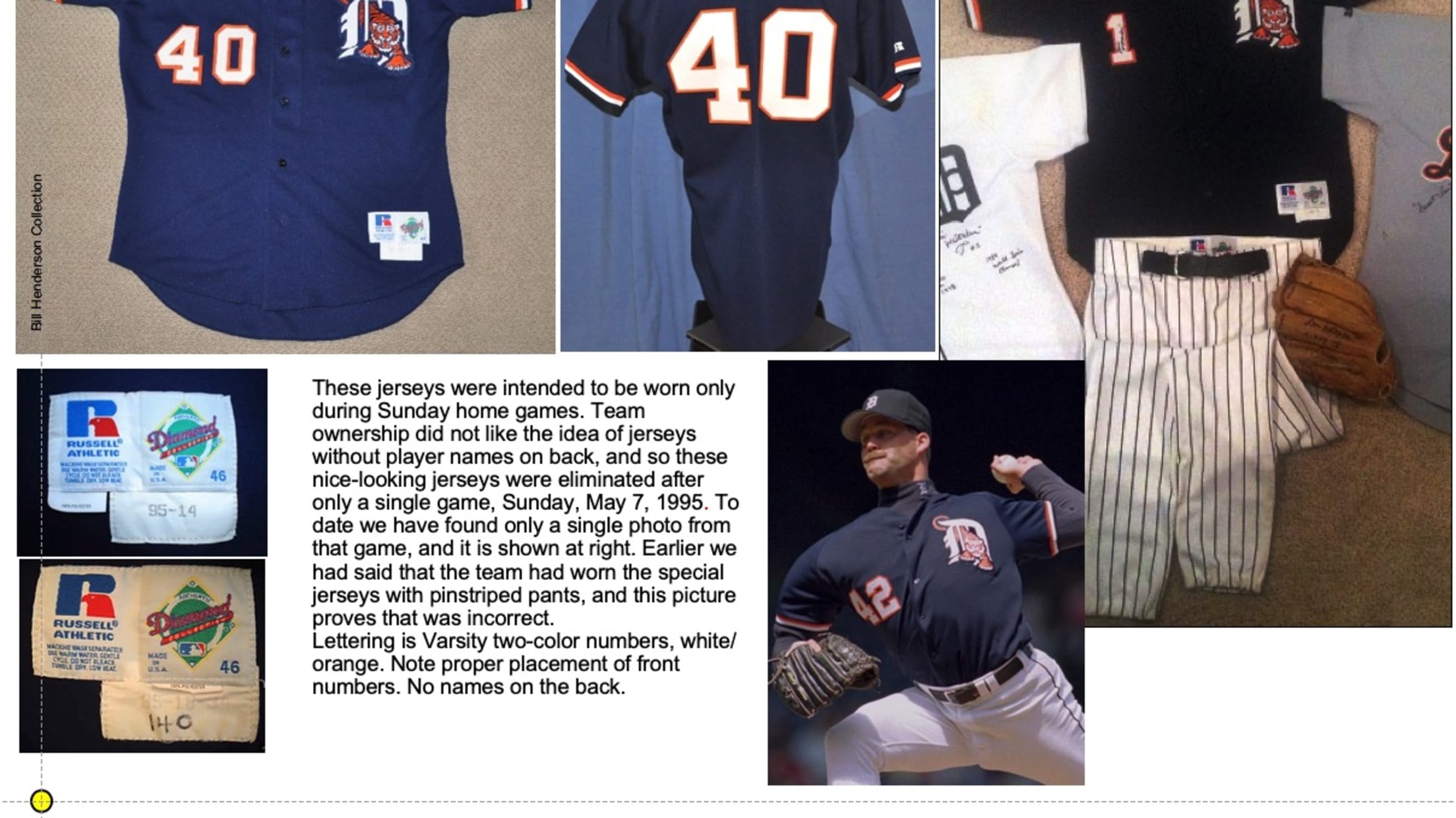 Author and collector Bill Henderson addressed the Tigers' unique and hard-to-find alternate jersey in his book, "The Game Worn Guide to MLB Jerseys."

It also came at a strange time for the club. The 1995 season began late as a result of the work stoppage that ended the previous season. The Tigers opened the 1995 campaign on the West Coast, then returned home to boos for their home opener, an 11-1 loss to Cleveland. Later that first homestand, the Tigers introduced their first mascot, PAWS.

Into this stepped the new team president/CEO, McHale, whose family is steeped in Tigers history. His father, a Detroit native, played five seasons with the Tigers before serving as general manager in 1957-58. The younger McHale was also born in Detroit and joined the Tigers from the Rockies.

Nobody needed to educate McHale about Tigers tradition. But likewise, nobody had apparently told McHale about an alternate Tigers jersey in the works for Sunday home games.

This combined for an interesting Sunday morning as the Tigers wrapped up their first homestand of the season.

“I think it was right about or just after our pregame work had started,” said McHale, who now works with Major League Baseball. “I was in our office, and I remember somebody came up to me and told me we were working out in [something] other than our home uniforms. This was completely the first word I had heard about this, so I went down to the clubhouse to see what was going on.”

“If I remember right, the jerseys were blue with a different D,” McHale recalled. “But most shocking to me was the pants were pinstriped.”

“That was something to me that was not Detroit Tigers,” McHale said. “This was my first homestand as the president of the Tigers. I talked to Sparky for a few brief moments. I talked to a couple players, and it struck me that this was probably not the way I saw us presenting ourselves to our fans. It just didn't look like the Tigers to me.”

While players from that club have some memory of the uniforms, memory of the backstory was blurry. The opinion of the gear, however, was pretty clear.

“I vaguely remember it looked a little goofy,” said Buddy Groom, the Tigers’ starting pitcher that day. “I think it had a goofy tiger on the left chest and a lot of orange on it. Sparky was old school and said, 'This doesn't fit for home.'”

After checking with owner Mike Ilitch, McHale agreed. Still, for one game, they dressed in blue. The pinstriped pants, at least, were a no-go.

I vaguely remember it looked a little goofy.

However quickly the Tigers lost the blue jerseys, they also lost the game, a 12-1 defeat to the Red Sox to complete a series sweep. Meanwhile, the Detroit Red Wings opened their Stanley Cup playoff run that day down the street at Joe Louis Arena, relegating the Tigers to the back pages of the papers, with no mention of the jersey.

The fan reaction, however, was less than enthusiastic.

“It didn't go over very well,” Trammell said. “The Olde English D, it’s been there forever, and we don’t want to change.”

Longtime clubhouse manager Jim Schmakel saves every style of jersey the Tigers wear, from their traditional uniforms to special events to throwbacks. But he didn’t save the blue ones.

“I never saw them again,” McHale said. “I don't know what happened. There didn't seem to be an enormous amount of affection to them.”

What happened to them after that game is a mystery. But somehow, they ended up in the wild. 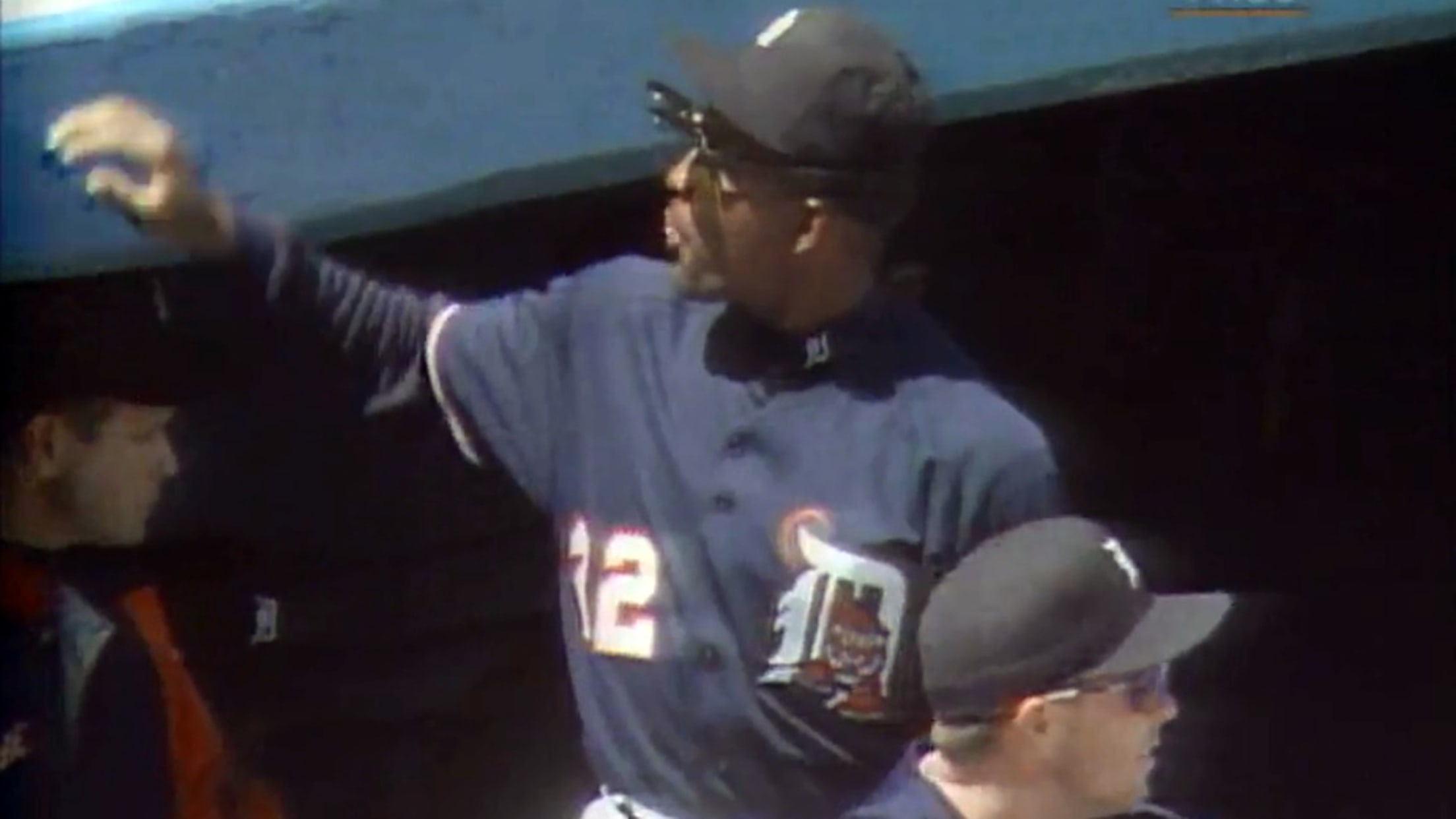 “They show up from time to time on eBay as not game-worn,” Henderson said, “but Russell [Athletic] made them to sell as not game-worn ones. But when the Tigers dumped them, all of those got dumped, too. There was a time on eBay when you could pick them up for next to nothing.”

That’s how Henderson ended up with a Felipe Lira jersey.

And that lucky No. 35 jersey that Reiss bought? That number belonged to infielder Chris Gomez. Collectors have made him offers, but he isn’t selling it.

“I wore this to Wrigley Field. I wore this to talk to Ernie Harwell. I wore it to World Series games,” Reiss said. “It's a pretty cool jersey. It's very busy. For the traditionalists, it's a little too busy. But that logo has grown on me.”

Henderson has a photo of Lou Whitaker’s No. 1 jersey in his book. One blue jersey that hasn’t appeared is Fryman’s No. 24.

“I may still own that jersey,” Fryman said. “The only thing I kept really from my career are all the jerseys I was given.”

Don’t expect a throwback to those jerseys any time soon.

“I loved and still love the Olde English D,” McHale said. “It seemed to me and still does that it's more what makes them the Detroit Tigers.”

credits: Jason Beck has covered the Tigers for MLB.com since 2002.