WASHINGTON -- The Phils will not only host a pivotal divisional showdown against the Mets this weekend at Citizens Bank Park, but the club will also honor a trio of legends -- with the help of numerous franchise icons -- throughout the three-game set for the Toyota Phillies Wall of Fame Weekend.

Philadelphia will honor former executive David Montgomery on Friday before inducting Manny Trillo into the Wall of Fame on Saturday. The Phillies will then retire Roy Halladay's number on Sunday, while also unveiling a No. 34 statue on the Third Base Plaza that will stand permanently alongside Dick Allen's No. 15 statue.

"It's always fun to see the guys who played before you," Phillies manager Joe Girardi said. "There's history there, but there's also a camaraderie there, and there's a connection there that I think is especially important. I'm really looking forward to this weekend."

The festivities start on Friday night, when the Phils celebrate the late Montgomery with a special on-field tribute featuring his family and former players. The former president and CEO spent nearly 50 years in the Phillies' organization and posthumously received the Baseball Hall of Fame's Buck O'Neil Lifetime Achievement Award last month. All fans will receive a commemorative scorecard print of Montgomery.

On Saturday, Trillo will become the 42nd Phillie to be inducted into the Toyota Phillies Wall of Fame on the Left Field Plaza. The pregame ceremony will feature other Wall of Famers, as well as on-field interactions with Bowa, Boone and Dickie Noles -- three of Trillo's teammates on the 1980 World Series champion team. All fans in attendance will receive a commemorative Manny Trillo Wall of Fame print.

The ceremonies continue on Sunday when Halladay's No. 34 will be forever immortalized above the rooftop in Ashburn Alley. He'll become the eighth player to have his number retired either by the franchise or MLB as a whole, joining Richie Ashburn (No. 1), Jim Bunning (14), Dick Allen (15), Schmidt (20), Carlton (32), Robin Roberts (36) and Jackie Robinson (42). Grover Cleveland Alexander and Chuck Klein are also honored in that area.

Again, a number of former Phillies greats will take part in the festivities, including Ruiz, who caught Halladay's May 29, 2010, perfect game and his no-hitter in the '10 National League Division Series. Fellow teammates Ibañez, Howard and Rollins are also expected to be in attendance.

All fans on Sunday will receive a collectible Roy Halladay retired number statue.

Girardi's only head-to-head meeting with the Hall of Fame pitcher during his playing days came in Halladay's first full season in 1999. Girardi lined out and walked.

The two met far more frequently during Girardi's time managing the Yankees. Doc made 12 career starts against Girardi's New York teams, winning eight of them and tossing five complete games -- including a pair of shutouts.

"We never beat him," Girardi said when asked what he remembers about facing Halladay. "The teams I had never beat him. He was incredible. He was as dominant as any pitcher for a six-, seven-year period as I've seen."

In addition to Doc's number being retired in Ashburn Alley, a six-foot-tall No. 34 statue will be unveiled alongside Allen's No. 15 statue on the Third Base Plaza. To further commemorate the day, the No. 34 will be featured not only on a patch worn by the players, but also on the bases and the official game ball.

Halladay, who died in November 2017 at the age of 40, was inducted into the Phillies Wall of Fame in 2018 and enshrined in the Baseball Hall of Fame in Cooperstown in '19. 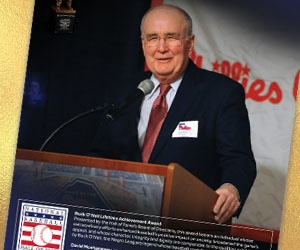 Youngsters from the Challenged Athletes Foundation, which provides opportunities and support to people with physical challenges so they can pursue active lifestyles, will be arriving at the ballpark early to train with Phillies legends Tommy Greene and Gary Matthews on Citizens Phan Field. These inspirational kids and their families will also be treated to that night’s game and Wall of Fame festivities, courtesy of Toyota. 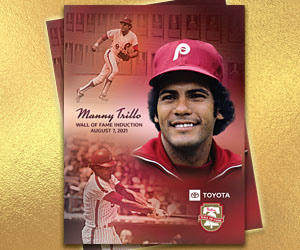 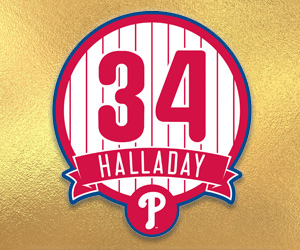