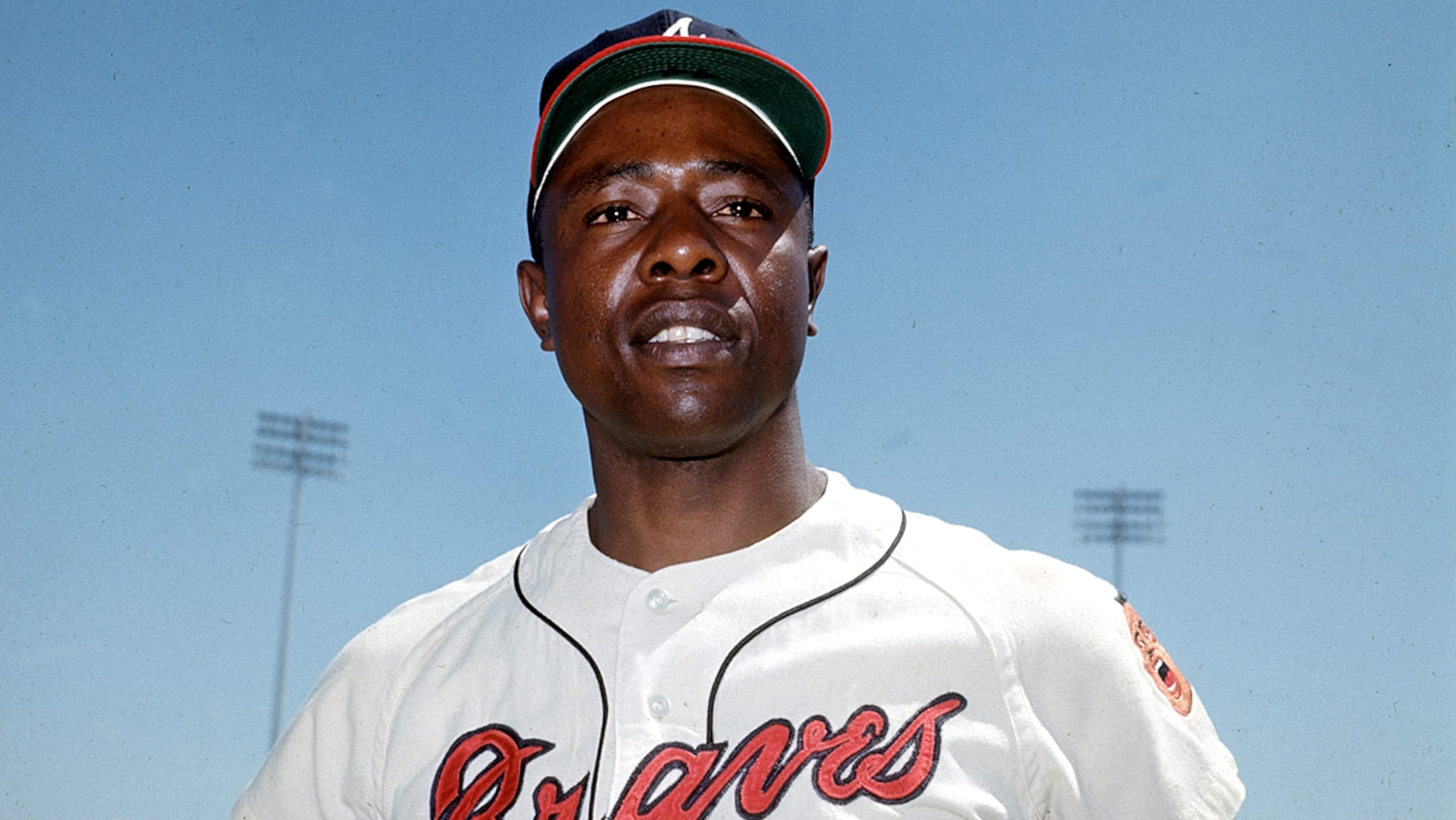 When it comes to icons of baseball, sport and American society at large, few names are bigger than .

Aaron overcame unfavorable odds in the Depression-era South to become an all-time baseball legend, and even more importantly, a man of impeccable grace and character. Muhammad Ali once said that Aaron was “the only man I idolize more than myself.”

Aaron, who died one year ago Saturday, built an extraordinary legacy. Here are some of the biggest moments in the life of Hammerin’ Hank.

Feb. 5, 1934: Aaron born in Mobile, Ala.
Henry Louis Aaron was one of eight children (including his brother, Tommie, who would later become his big league teammate) in a family that straddled the poverty line in the Toulminville neighborhood of Mobile. Each family member worked to support the household, including Henry, who picked cotton and worked several other jobs in his adolescence.

Aaron honed his early batting eye by hitting bottle caps with a broom handle, and he became a gifted high school athlete in both football and baseball. In 1947, Aaron ducked school to attend a talk given by Jackie Robinson, a man who would shape Aaron’s motivations and convictions, when Robinson’s Dodgers came to Mobile for an exhibition. Two years later, Aaron’s mother, Estella, let him sign with the semi-pro Mobile Black Bears for $3 per game, on the condition that he only play in local contests.

June 14, 1952: Aaron signs with Boston Braves
Aaron had agreed to a $200 per month contract with the Negro American League’s Indianapolis Clowns in 1951, despite his mother’s wishes that he attend college instead. He immediately impressed, batting .366 and helping the Clowns capture the ’52 Negro World Series title.

Aaron’s performance earned him a pair of Major League offers from the Giants and Braves, and Aaron chose Boston’s offer of $50 more per month. Aaron reported to Eau Claire, Wisc., for Class C ball, and after eliminating the cross-handed grip he developed as a boy, batted .336 to claim the Northern League’s Rookie of the Year Award.

While Aaron’s bat was promising, his mental fortitude proved even more impressive when the Braves promoted him to the Jacksonville Tars the next year. As one of five African-American players breaking the color line in the newly desegregated Sally League, Aaron endured taunts and Jim Crow-era discrimination on the road (“Henry Aaron led the league in everything except hotel accommodations,” one writer said) and claimed the league’s MVP honors. He also met -- and soon married -- his first wife, Barbara, that year.

April 13, 1954: Aaron makes big league debut
Bobby Thomson famously clubbed the “Shot Heard ’Round the World” to win the 1951 NL pennant for the Giants, but his life took another famous turn three years later when, as a member of the Braves, he broke his ankle in Spring Training. That opened a spot for Aaron, who started in left field for the Milwaukee’s ’54 season opener in Cincinnati.

Aaron went 0-for-5 that afternoon, but within 10 days, he collected his first Major League hit and home run -- both coming off Cardinals right-hander Vic Raschi. A fractured ankle cut Aaron’s season short in early September, but he placed fourth in NL Rookie of the Year Award voting after batting .280 and knocking his first 13 homers.

Aaron moved over to right field the next year and finished with a .314 average, 27 homers and an NL-best 37 doubles. He placed ninth in NL MVP Award voting and earned his first of 21 consecutive All-Star Game selections. Aaron’s 25 total All-Star nods are a Major League record that might never be surpassed. 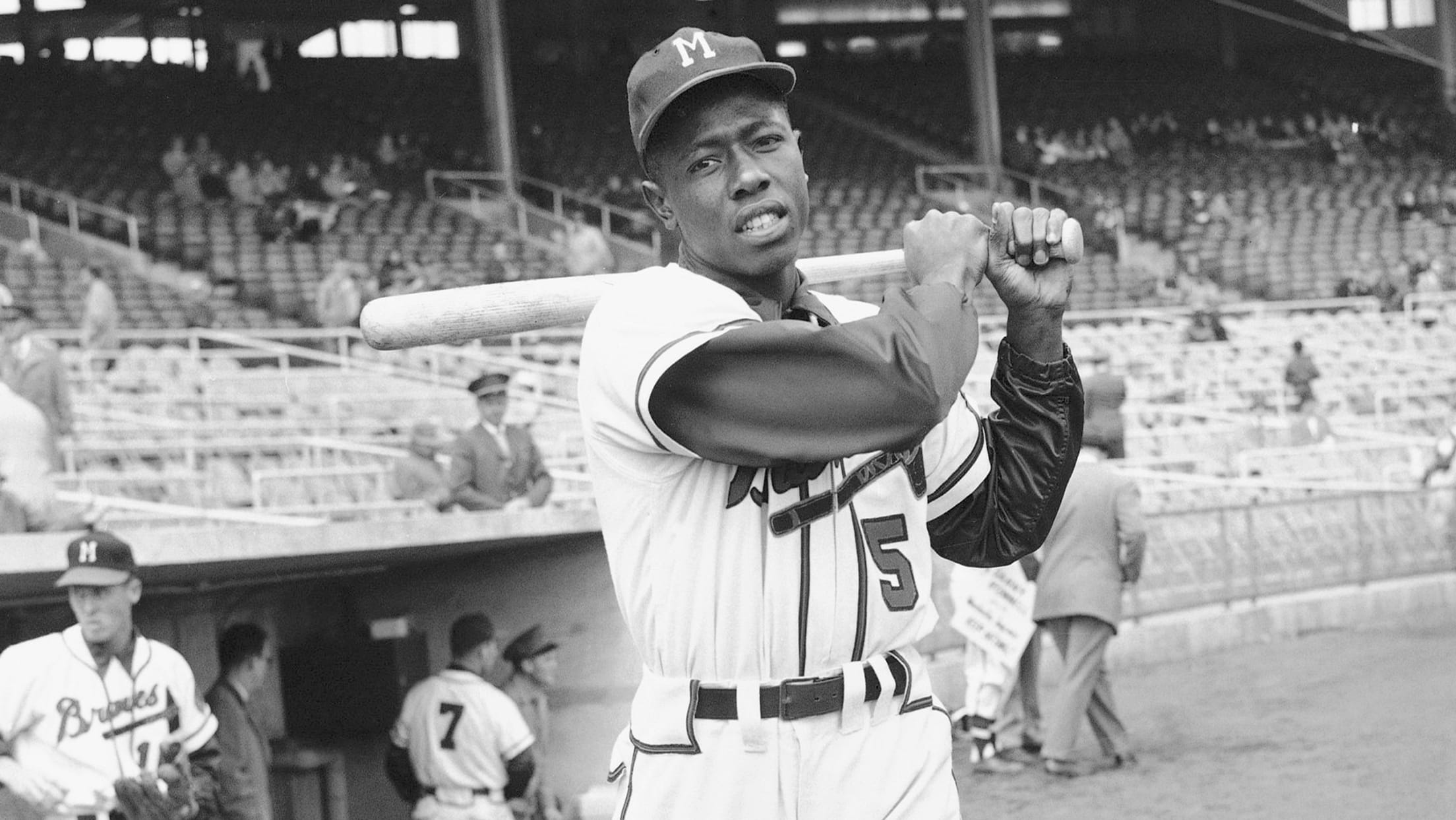 Oct. 10, 1957: Aaron, Braves take down mighty Yanks
Milwaukee’s new slugger was just getting started. In 1956, Aaron paced the Senior Circuit with a .328 average, 200 hits, 34 doubles and 340 total bases. He moved to the Braves’ cleanup spot the following year and enjoyed what might have been his best Major League season: A sport-topping 44 homers, 132 RBIs and 369 total bases.

Those numbers netted Aaron his only NL MVP Award in November 1957, but more treasured moments came weeks earlier. On Sept. 23, Aaron clubbed an 11th-inning homer that clinched the Braves’ first pennant in Milwaukee. Then, he hit .393 and knocked three dingers in his team’s thrilling seven-game World Series triumph over the vaunted Yankees. While Aaron led Milwaukee back to a Fall Classic rematch the following year, ’57 would prove to be the only championship of his career.

July 14, 1968: Aaron joins 500 HR Club
While the Braves made just one postseason appearance in the 1960s, the uber-consistent Aaron began racking up accomplishments. In a June 1961 game, Aaron joined lineup mates Eddie Mathews, Joe Adcock and Frank Thomas as the first teammate quartet to homer in successive at-bats. Two years later, Aaron followed Ken Williams and Willie Mays as the third player to pair 30-plus homers with 30-plus steals in a single season, and he missed out on a Triple Crown by just seven points to NL batting champion Tommy Davis.

Beginning with his 1957 MVP year through the ’67 campaign, Aaron belted at least 30 home runs in all but one season. That set Hammerin’ Hank up for a big July afternoon at old Atlanta Stadium, when he knocked Giants pitcher Mike McCormick’s third-inning pitch over the left-field wall for his 500th homer. At the time, Aaron was just the eighth member of the 500 Club, and he reached the milestone in fewer seasons than anyone except Mays. Aaron’s pace was one season quicker than Babe Ruth, a name he would hear plenty in the years to come.

May 17, 1970: Aaron gets 3,000th hit
Only six players in Major League history have tallied 500 homers and 3,000 hits, and Aaron was the first to do it. His infield single off Reds rookie Wayne Simpson made him just the third Live Ball Era member of the 3,000-hit club, following Paul Waner and Stan Musial, who walked onto the diamond at Crosley Field to celebrate the moment with Aaron.

Despite founding a statistical club all to himself with the 500-homer and 3,000-hit benchmarks, Aaron still was “not a household name,” in the words of Thomas Rogers of the Cincinnati Enquirer. That would change after the following season, when a career-best 47 homers suddenly raised Aaron’s lifetime total to 639 -- and within striking distance of a moment that would change his life forever.

April 8, 1974: “There’s a new home run champion …”
Baseball has seldom seen moments accompanied by as many eyes and fanfare as Aaron’s at-bats at the beginning of 1974. Months before, Aaron had finished the ’73 campaign with 713 career home runs, leaving him just one dinger shy of tying Babe Ruth for the all-time mark.

That set up an agonizingly long offseason of interviews, questions and trying moments for Aaron. He received thousands of letters every week -- some encouraging, others carrying terrifying messages. Racism remained prevalent in sections of America in 1974, just one decade after the passage of the Civil Rights Act, and Aaron received a considerable amount of death threats from fans who wanted Ruth to remain the homer king.

Such threats might have rattled men with less conviction, but Aaron handled the attention with unparalleled grace and focus. He tied Ruth in his first at-bat of the season with a three-run blast off Reds pitcher Jack Billingham. Four nights later, Aaron put the suspense to rest with a blast off Dodgers pitcher Al Downing, evoking the famous call, “There's a new home run champion of all time, and it’s Henry Aaron!” from Braves broadcaster Milo Hamilton.

Aaron would later call Jackie Robinson his hero, “not only for the baseball that he played, but simply because of the person he was.” In refusing to bow to societal pressure and thriving under intense scrutiny, Aaron carried on the legacy of the man he revered.

“I felt the importance of what I was doing was sending a signal to the world,” Aaron said, “and telling people that all you wanted to do was have the playing field level. Just give me an opportunity. I felt that way; that not only did I have the world on my shoulders as far as baseball was concerned, but I also had the world on my shoulders to demonstrate to people that, hey, just give me an opportunity."

May 1, 1975: Hank passes The Babe again
A trade in November 1974 returned Aaron to Milwaukee, where he played out the remainder of his career with the nascent Brewers. Aaron’s old fan base got to see him pass Ruth again, this time when he drove home teammate Sixto Lezcano with a single for his 2,210th career RBI.

Ruth’s official total, according to the Elias Sports Bureau, now stands under 2,000, because the Bureau does not recognize Ruth’s RBIs that came before the statistic was formally recognized in 1920. So, Aaron -- unbeknownst to those at the time -- technically had the record already in hand. Aaron’s RBI came with little fanfare at Milwaukee’s County Stadium; the ball was retrieved and thrown to the dugout, and play resumed. But while Barry Bonds eventually surpassed Aaron’s 755 home runs, Aaron’s record 2,297 RBIs remain unchallenged.

July 20, 1976: Aaron hits final home run
A crowd of 10,134 at County Stadium saw Aaron knock his 755th homer off Angels pitcher Dick Drago, but few -- if any -- of those in attendance would have predicted that it would be his final blast. Aaron finished the year with 64 more at-bats, but he didn’t go deep again. Thirty-one years later, Aaron would show his grace once more when he congratulated Bonds on his record-breaking 756th home run.

Aug. 1, 1982: Aaron gets call to Hall
Only nine votes separated Aaron from unanimous election to the National Baseball Hall of Fame in 1982, when he earned the second-highest BBWAA voting percentage in history (97.8%) at the time behind Ty Cobb (98.2%). His election alongside Frank Robinson brought historic power to the dais that summer, as the pair combined for a mammoth 1,341 homers across a combined 44 Major League seasons. 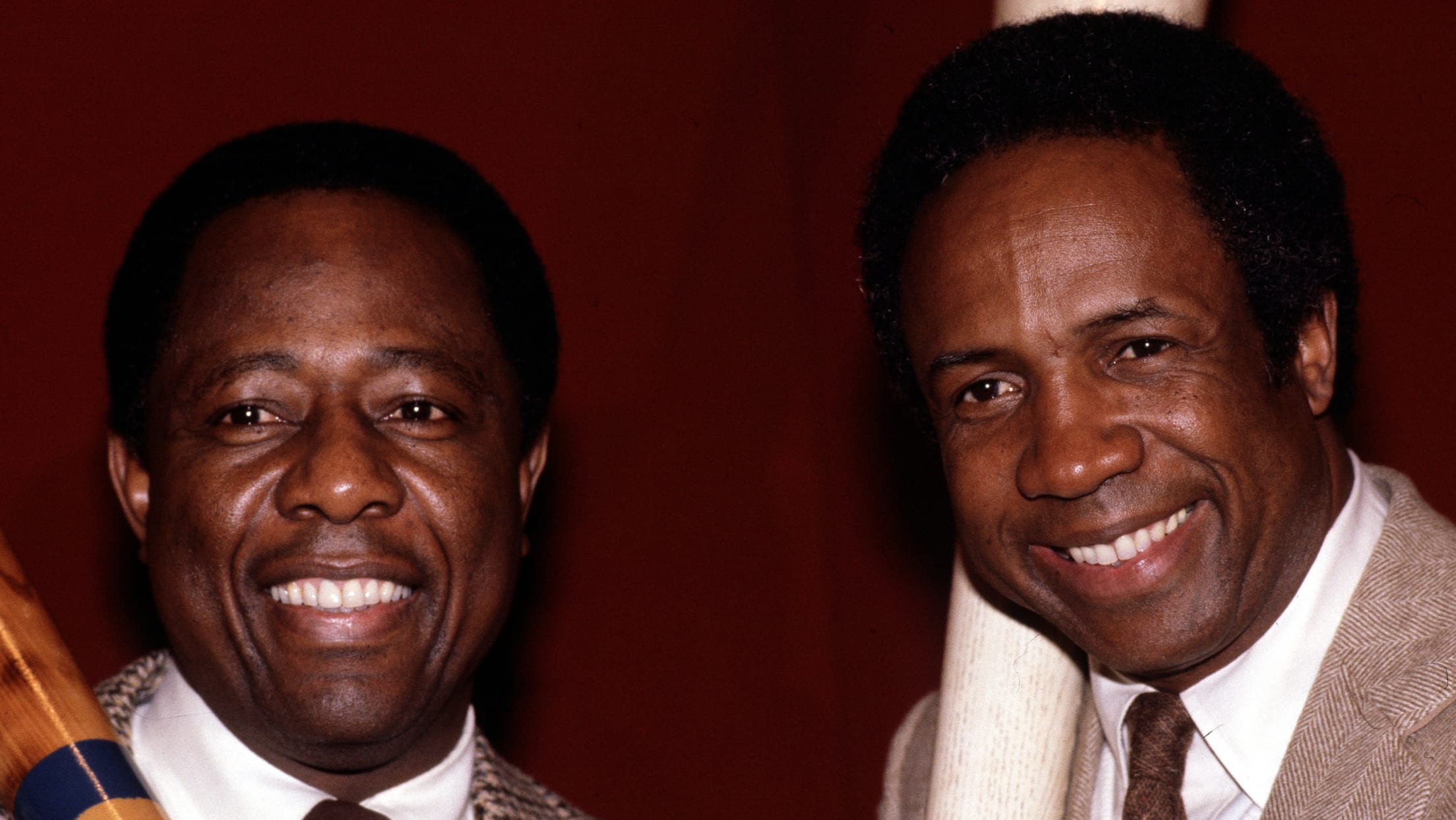 Feb. 5, 1999: MLB introduces Hank Aaron Award
When tasked with commemorating the 25th anniversary of Aaron’s record-breaking homer in Atlanta, Major League Baseball found an ideal honor in the Hank Aaron Award, now given annually to the top hitter in each league. MLB announced the award at Aaron’s 65th birthday celebration. The winners, selected by ballots submitted by fans, broadcasters and analysts, are honored during the World Series, and Aaron was usually on hand to present the award.

July 9, 2002: President Bush honors Aaron
Aaron continued to be celebrated into the 21st century. He was named to MLB’s All-Century Team in 2000, and he was awarded the Presidential Citizens Medal by President Bill Clinton in ’01.

The following year, President George W. Bush presented Aaron with the Presidential Medal of Freedom in a ceremony at the White House. At the time, Aaron was just the fourth baseball player to receive America’s highest civilian honor, following in the footsteps of Joe DiMaggio, Ted Williams and his hero, Jackie Robinson.

“Hank Aaron overcame poverty and racism to become one of the most accomplished baseball players of all time,” said President Bush. “By steadily pursuing his calling in the face of unreasoning hatred, Hank Aaron has proven himself a great human being, as well as a great athlete.”

credits: Matt Kelly is a reporter for MLB.com based in New York.
You may like 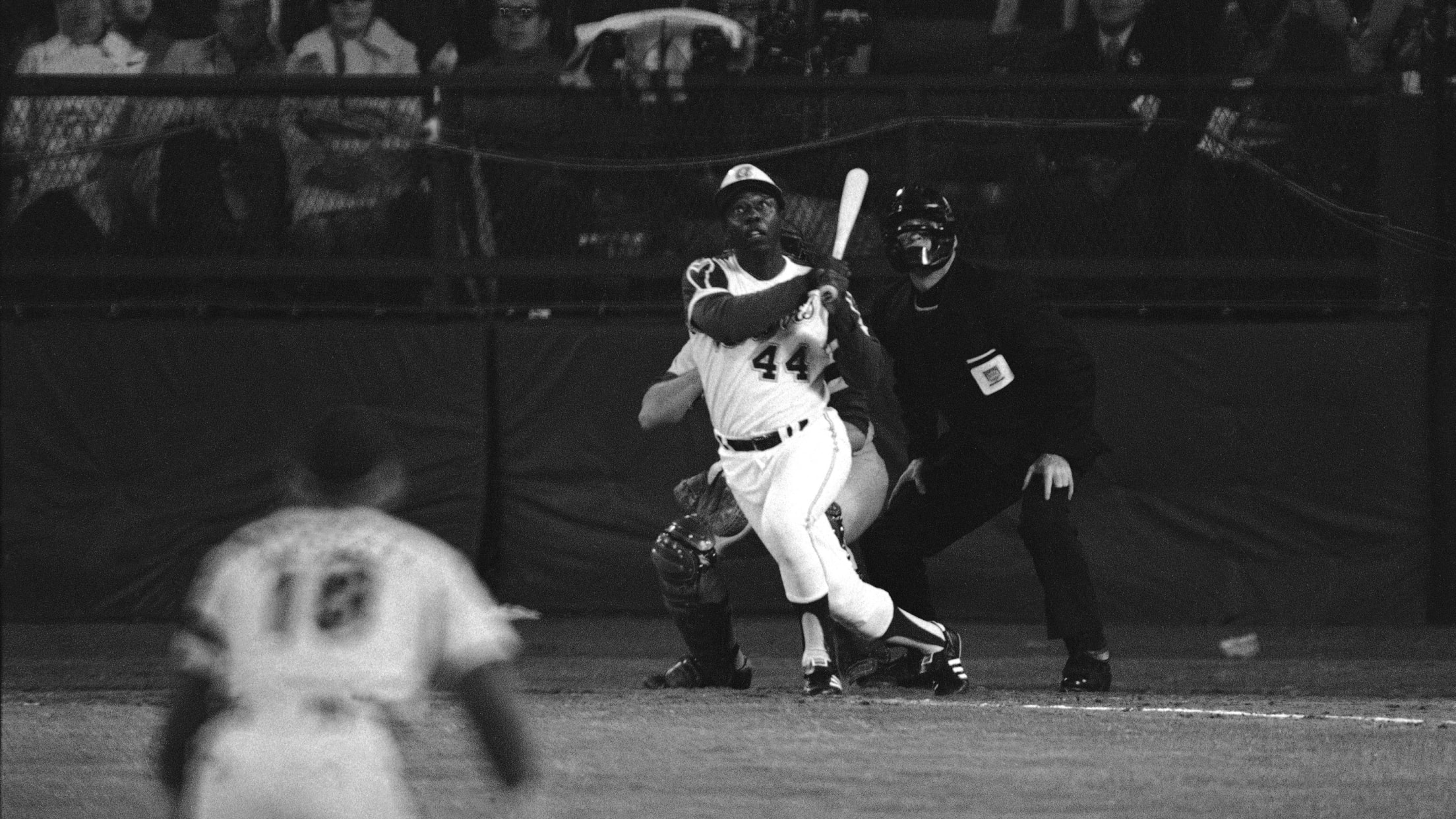 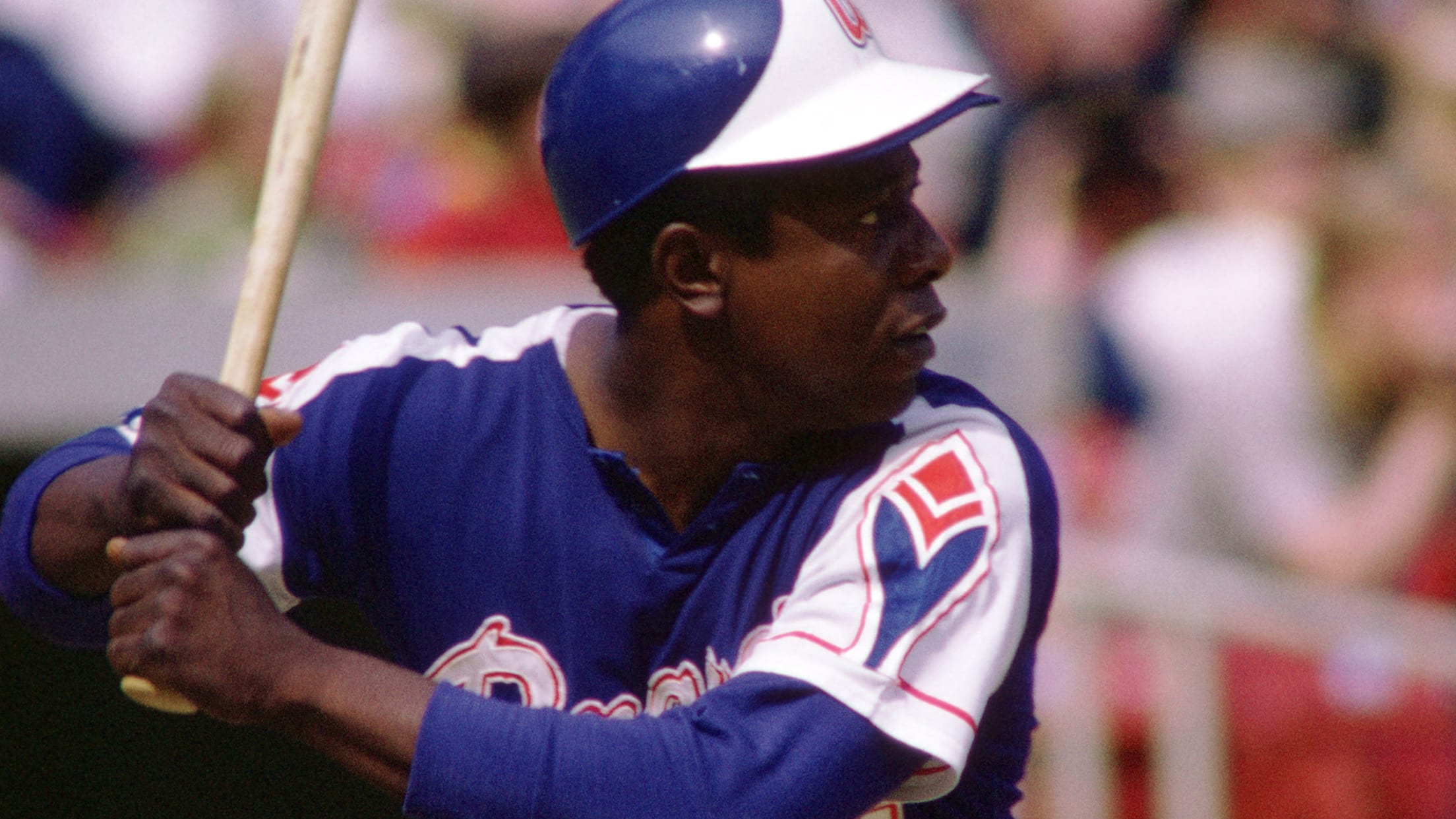 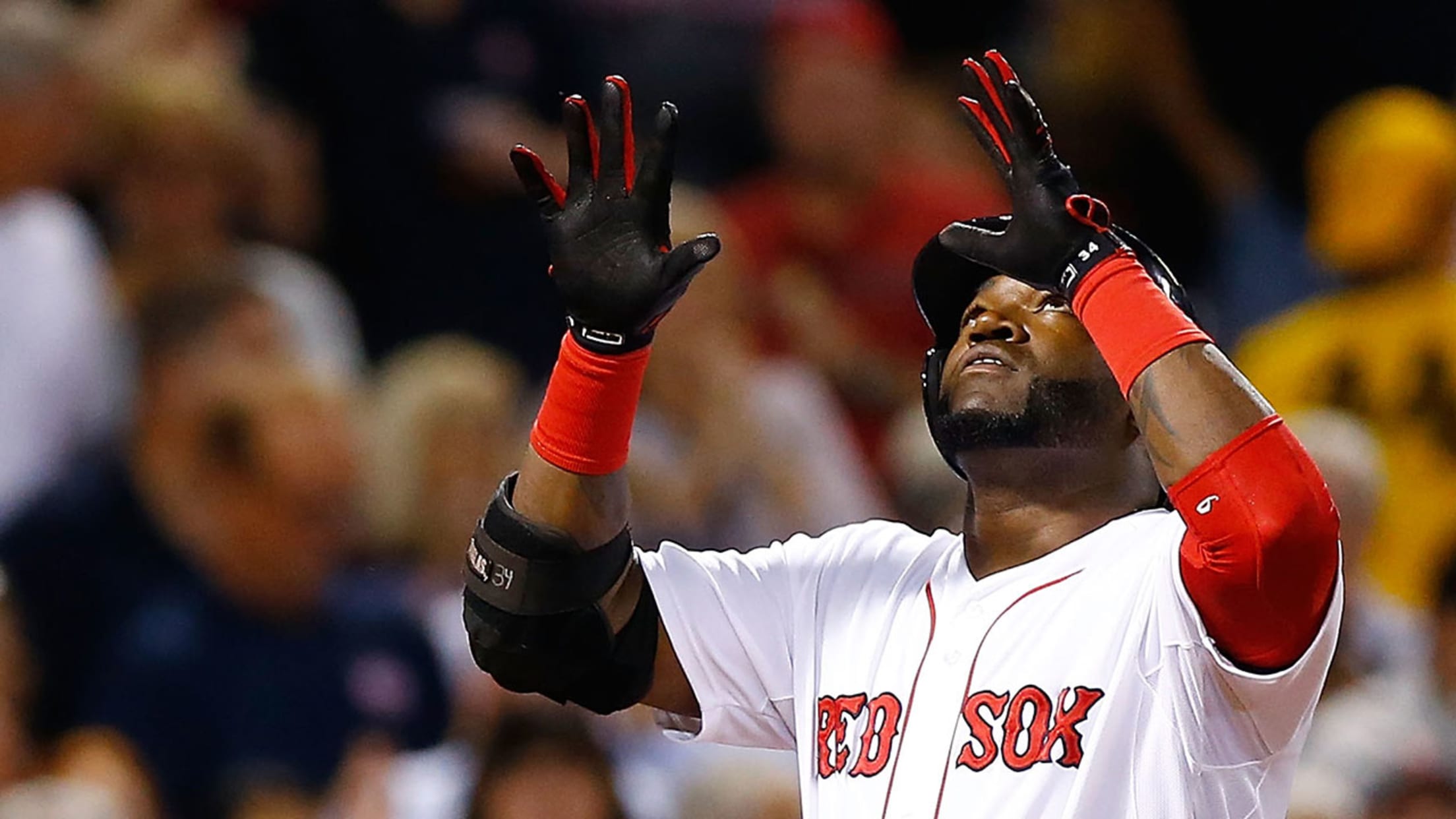 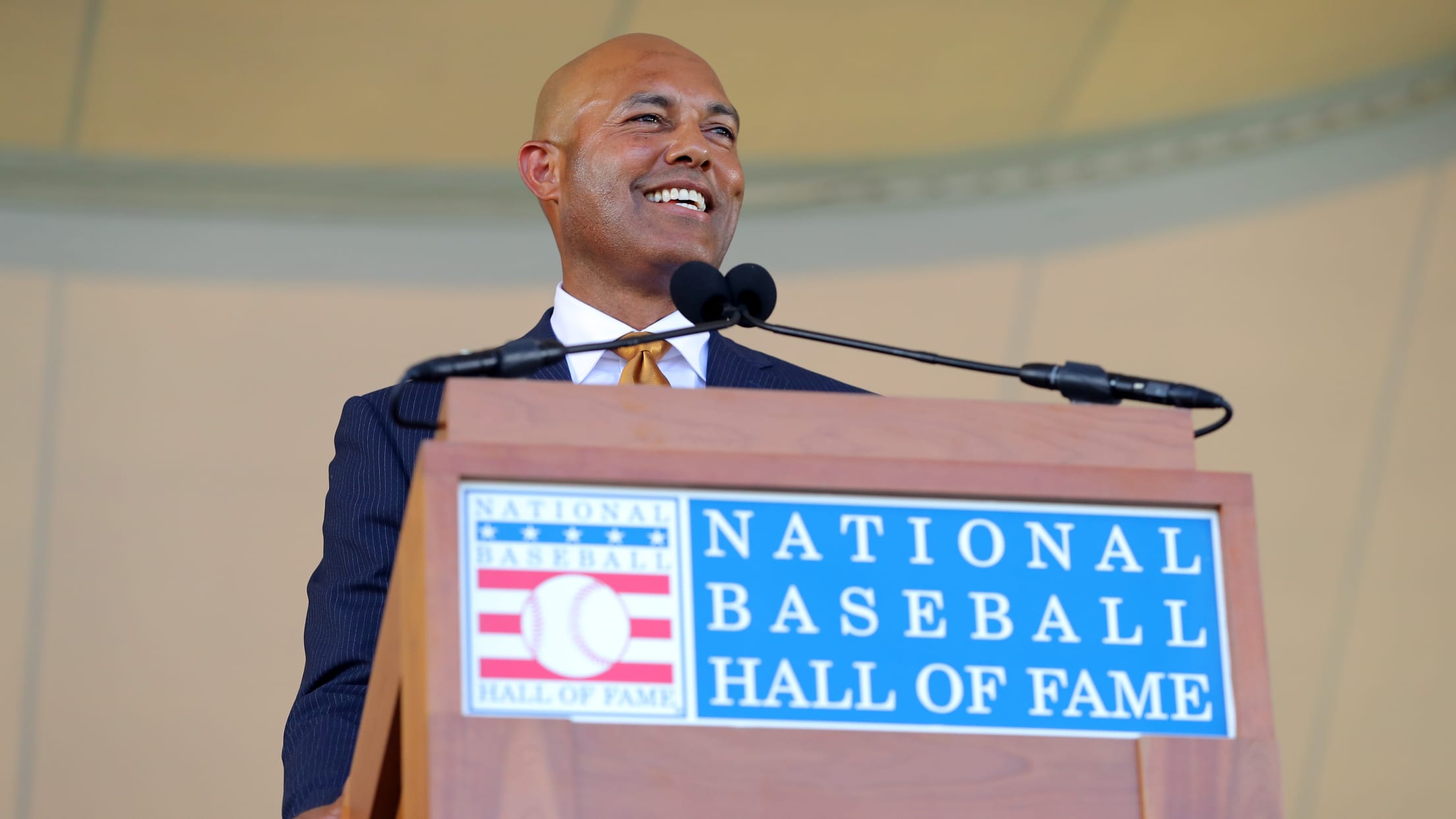