This exclusive comic book-style poster was created by MARVEL and the Reds to honor Wade and his Hulk tattoo that he wore on the night of his historic accomplishment. This special poster will go to fans in attendance on Saturday, July 17, while supplies last.

On Saturday, July 17, celebrate Wade Miley's no-hitter with this commemorative poster featuring Wade and the Hulk! 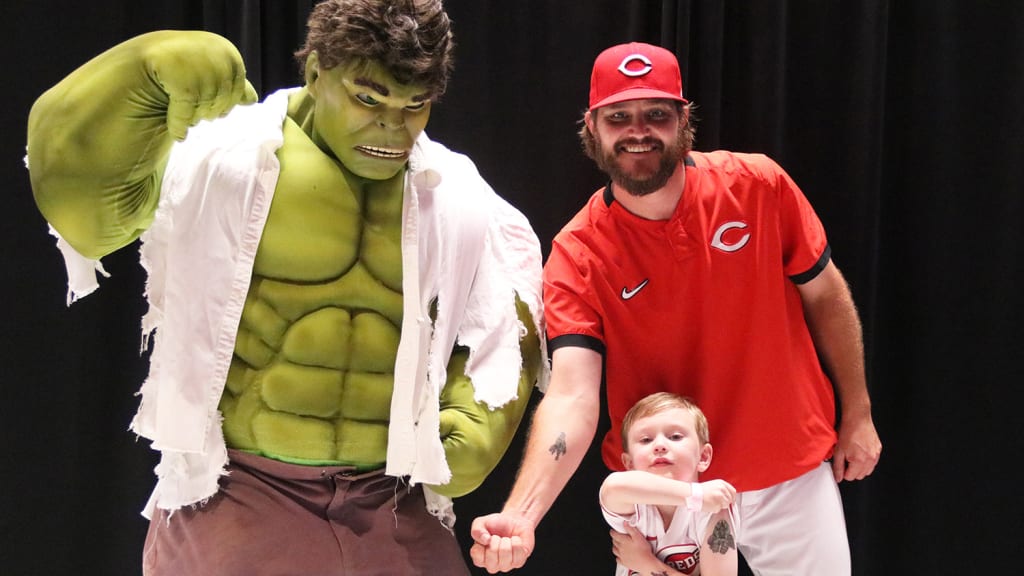 Brian Crosby is the Creative Director of Marvel Themed Entertainment. In that capacity, he oversees and contributes to any representation of Marvel’s library of over 9,000 characters as they appear in various theme parks, traveling exhibits, shows, pop culture conventions, fan events, sporting events and amusement venues around the world. Having most recently worked on Marvel: Universe of Super Heroes (museum exhibition that launched at the Museum of Pop Culture and celebrates 80 years of Marvel history), Marvel Universe Live! (traveling arena show produced by Feld Entertainment), Marvel Avengers S.T.A.T.I.O.N. (traveling experience set in the Marvel Cinematic Universe in partnership with Victory Hill Exhibitions), IMG Worlds of Adventure (the world’s largest indoor theme park) and attractions for the Disney Parks & Resorts including the “Iron Man Experience” and “Ant-Man and the Wasp: Nano Battle!” at Hong Kong Disneyland and “Guardians of the Galaxy – Mission: Breakout!” at Disney California Adventure while also contributing to the recently opened Avengers Campus and Disney’s Hotel New York: The Art of Marvel at Disneyland Paris.

Prior to joining Marvel, Brian spent 10 years working for Walt Disney Imagineering as a Visual Art Specialist, Dimensional Designer, Show/Concept Designer and ultimately, Creative Designer working on a variety of projects for Disney Parks & Resorts including Finding Nemo: Submarine Voyage, it’s a Small World, TRON Lightcyle Power Run, and others. While there he also co-created the “Disney Kingdoms” line of comic books, an early partnership between Marvel and Imagineering telling new stories based on iconic Disney attractions including “Seekers of the Weird”, “Figment”, “Big Thunder Mountain Railroad”, “Haunted Mansion” and the “Enchanted Tiki Room.”

Additionally, Brian’s paintings can be seen at the WonderGround Galleries at Downtown Disney in Anaheim and at Disney Springs in Walt Disney World.

He currently resides in Cypress, California with his wife, Kelly, and their four children, Bladen, Kasey, Braxon and Brock.

An infielder for part of six Major League seasons, Ed Crosby was a second-round pick of the Cardinals in the June 1969 amateur draft and made his big league debut with St. Louis in 1970. After spending the entire 1971 season with the Cardinals’ Triple-A affiliate in Tulsa, Crosby spent his first full season in the majors in 1972, batting .217 in 101 games with the Cardinals. On July 27, 1973, the Cardinals traded Crosby to the Reds. He hit .216 in 36 games as the Reds won their third NL West Division title in four seasons. Crosby rounded out his Major League career by appearing in 100 games with the Cleveland Indians over the 1974–1976 seasons. He retired as an active player after playing three seasons in Triple-A from 1977-1979.

In 1980, Ed began the second half of his career as a Professional Baseball Scout where he worked for 22 years. From 1980-1989, he worked as the West Coast Supervisor for the Baltimore Orioles where they won the World Series in 1983 and Ed signed Major Leaguers Craig Worthington and Jeff Tackett. He then worked for the Oakland Athletics from 1990-1993 where he signed future AL MVP Jason Giambi and Eric Martins. From 1994-1997, he worked with the Chicago White Sox signing Aaron Rowand and from 1997-2000 with the Cleveland Indians signing Albie Lopez. Ed concluded his Scouting career working part-time with the Arizona Diamondbacks and Anaheim Angels from 2000-2002.

In addition to his son Brian from Marvel, Ed has two other sons, Bobby and Blake. Bobby Crosby was the 2004 AL Rookie of Year with the Oakland Athletics who also spent time playing for the Pittsburgh Pirates and the Arizona Diamondbacks and is currently the Manager of the AA Midland Rockhounds. Blake Crosby followed in his father’s scouting footsteps and is the Amateur Scouting National Supervisor with the Toronto Blue Jays.

Ed is now retired and lives in Southern California.