Bringing Giants Past to Life

For over 150 years the hidden-ball trick has been used to get a quick out. Defined by The New Dickson Baseball Dictionary as “a time-honored legal ruse in which an [infielder] conceals the ball and hopes that the baserunner believes it has been returned to the pitcher. When the runner steps off the base, he is summarily tagged out with the hidden ball.” On June 26, 1999 J.T. Snow got in on the fun when he successfully used the trick to get the Dodgers’ Carlos Perez out in the top of the 4th inning. After the game, Snow commented, “I was nervous. I felt like I was stealing something and running out of a store.”

Much has been said (good and bad) about Candlestick Park, but it was groundbreaking. It is considered the first modern ballpark because it was the first to be built entirely of reinforced concrete. Regular concrete does not hold up to wind, earthquakes and other vibrations, which would be a problem at Candlestick Point. When steel is embedded in the concrete, it strengthens the structure so it can withstand gale-force winds, a 6.9 earthquake and over 60,000 celebrating Giants fans.

Millions of children dream about hitting a home run in the World Series, and in the 2012 World Series Pablo Sandoval lived the dream three times in one game. Of the three home runs he hit that day, Giants batting coach, Bam Bam Meulens remarked, “My favorite was the first one because it was an 0-2 count and it was a 95—mph fastball up in the zone. It’s hard to hit those pitches out.” Joining Babe Ruth (1926 & 1928),Reggie Jackson (1977) and Albert Pujols (2011) in the World Series, Single Game Home Run Record Book is a dream come for any baseball fan.

On June 27, 1905 a lifelong partnership was formed when Giants owner, John T. Brush, hired a 12-year-old Eddie Brannick as an errand boy. Brannick did such a great job, the following year he started helping “Mr. McGraw” (as he always called the Giants manager)in the clubhouse, and he never left. After working for the club for over 30 years, the 43 year-old officially became the Giants[Traveling] Secretary on February 15, 1936 –it was a position he would hold for the next 35 years. When Brannick retired on February 23, 1971 he had spent 65 years with the team, working with everyone from Christy Mathewson to Tito Fuentes and coordinating team travel from the Jazz Age to the Jet Age.

For almost 100 years baseball and The Breakfast of Champions have gone together. Seven years after the Minneapolis company became a sponsor at Nicollet Park,they put the first athlete (Lou Gehrig) on their box. In 2001 Barry Bonds was added to the list of baseball greats after hitting 73 home runs and becoming the single season Home Run Champion.

-From the Nick Peters collection

Giants owner, Horace Stonham knew that baseball is at its best when it brings people together and in1953 he saw an opportunity to do just that. Starting in 1931, San Francisco Seals legend, Lefty O’Doul started arranging tours across Japan with other major leaguers, but when Shodi Yasuda, the president of Japan’s Yomiuri newspaper and baseball team, invited the Giants to Japan in 1953 it was the first time a single team traveled there. Less than 10 years after the end of World War II, Bobby Hofman and his Giants teammates received an enameled belt buckle from the Nagoya Dragons commemorating their game on October 25, 1953and helped to promote baseball around the world and bring the two countries together.

The top of the ball says everything about Willie Mays: LEGEND. In 2021 we celebrate Mays’ 90th birthday and it’s good to remember how much the world has changed since his birth on May 6, 1931. When Mays, along with William Shatner, James Dean and Desmond Tutu, was born the average wage was $1,850.00 a year and for an average of $18 a month you could rent a house(!) or purchase a new one for under $7,000. 1931 also was the last year you could buy a new Ford Model A paying 10 cents a gallon for gas, which you could use to cross the newly completed George Washington Bridge to see the brand-new Empire State Building.

100 years before the Earthquake Series the New York Giants also won the pennant. Portraits of all of the players, along with manager Jim Mutrie were featured on a commemorative plate. Featuring 6 future Hall of Famers (Mutrie, Roger Connor, Buck Ewing, Jim O’Rourke, Tim Keefe and Monte Ward) in 1889 the New York Baseball Club captured their second consecutive championship and a beautiful momento was created.

In 2016 Kristen and Buster Posey created BP28 to raise money and awareness for Pediatric Cancer. Since its inception, the Posey’s have raised more than $4 million for the Posey Family Research Grant and Fellowship Programs at UCSF Benioff Children’s Hospital. The Buster and Kristen Posey Fund along with the V Foundation fund research and less toxic treatment options for kids battling cancer.

Before the Giants gave out silver FOBs, season ticketholders were presented with a 4.5x6 sterling silver pass. At the start of the 1898 season Bill Joyce was the team’s manger, but after he was fired on June 11th, the holders of this pass, Albert and Rebecca Elias, were able to watch the seven games Cap Anson managed for the Giants at the Polo Grounds before Joyce was rehired. Unfortunately, all the turmoil on the team did not help the Giants in the standings and the team finished in 7th place, 25 games behind the Boston Beaneaters for the pennant.

2020 was a tumultuous year for all of us, but important themes remain. The plaques on the sides of a base of called jewels, and the jewels from Opening Day in 2020 contained important messages. Black Lives Matter and Thank You Frontline Heroes are concepts that continue to resonate in baseball and the world we live in. 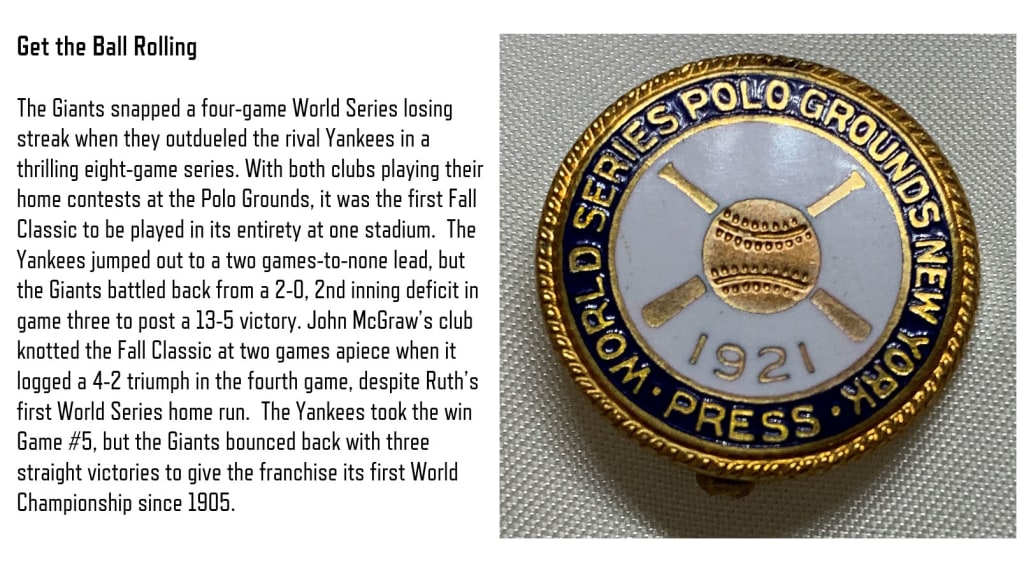 World Series Pins – Wait Til Next Year
Sometimes exciting things can happen even when the Giants lose the World Series. 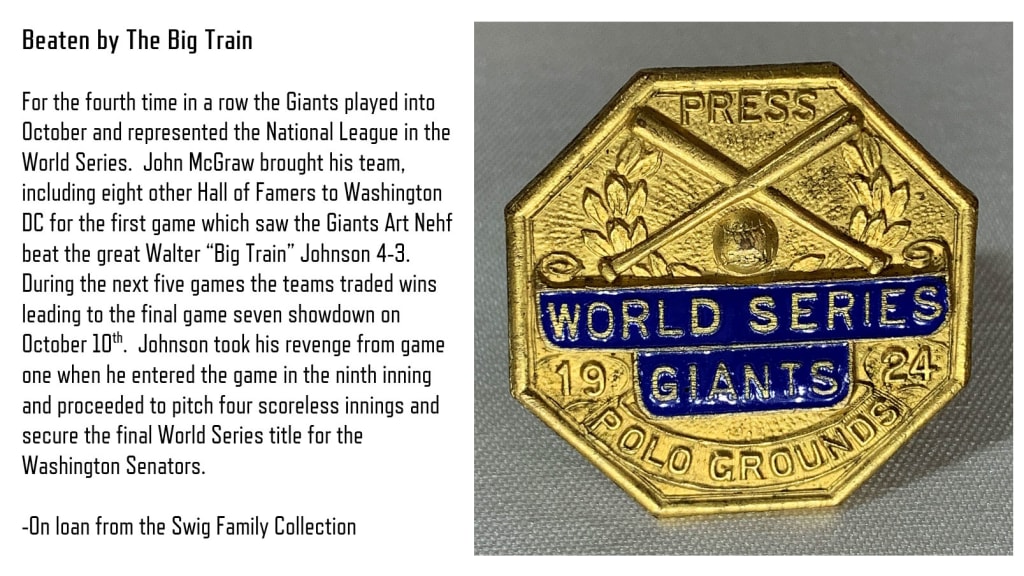 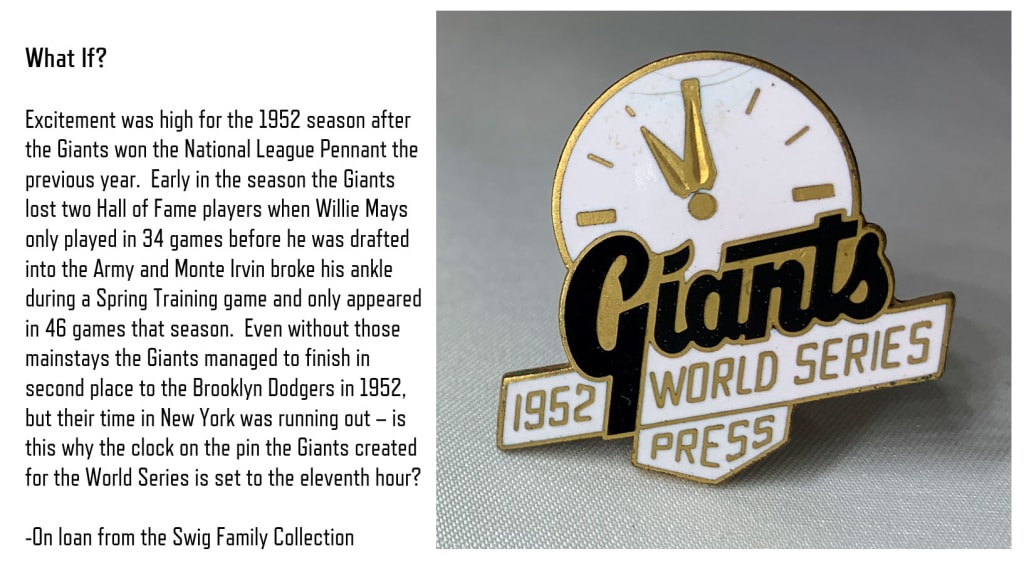 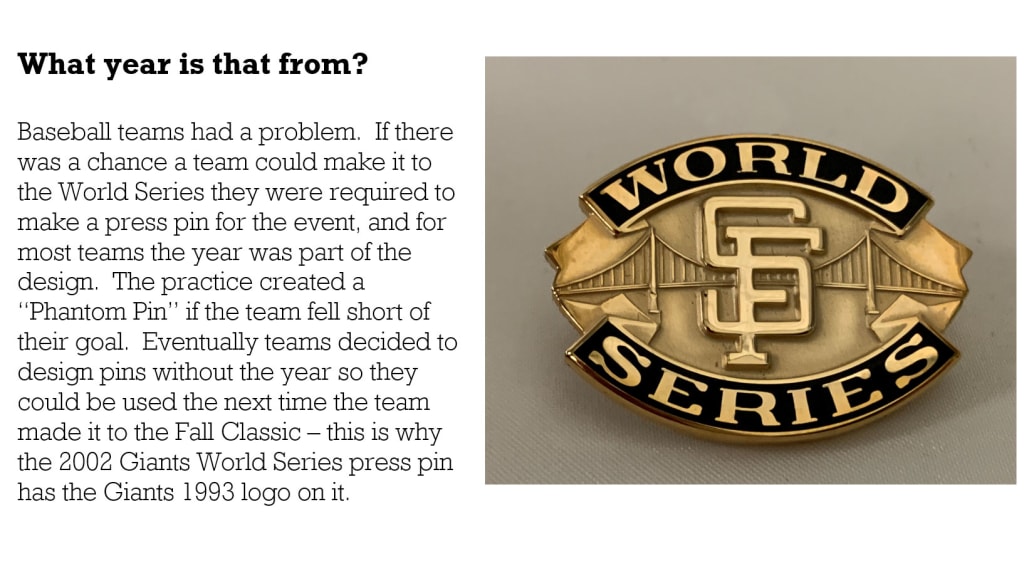 1954
Legendary moments and people highlighted the last World Series Championship for the Giants in New York. 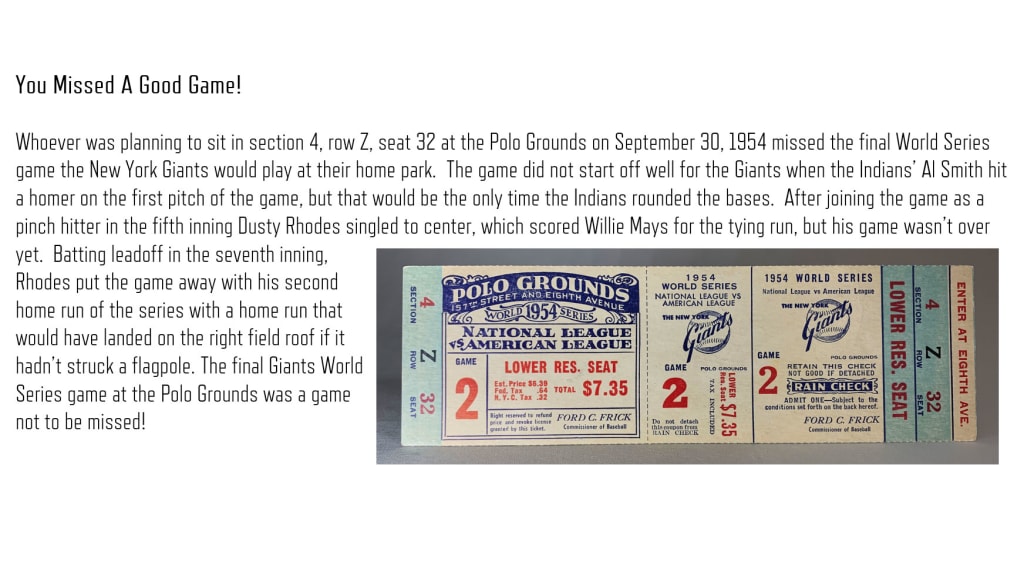 Bats
The bat a baseball player uses is as unique as the legacy they leave. 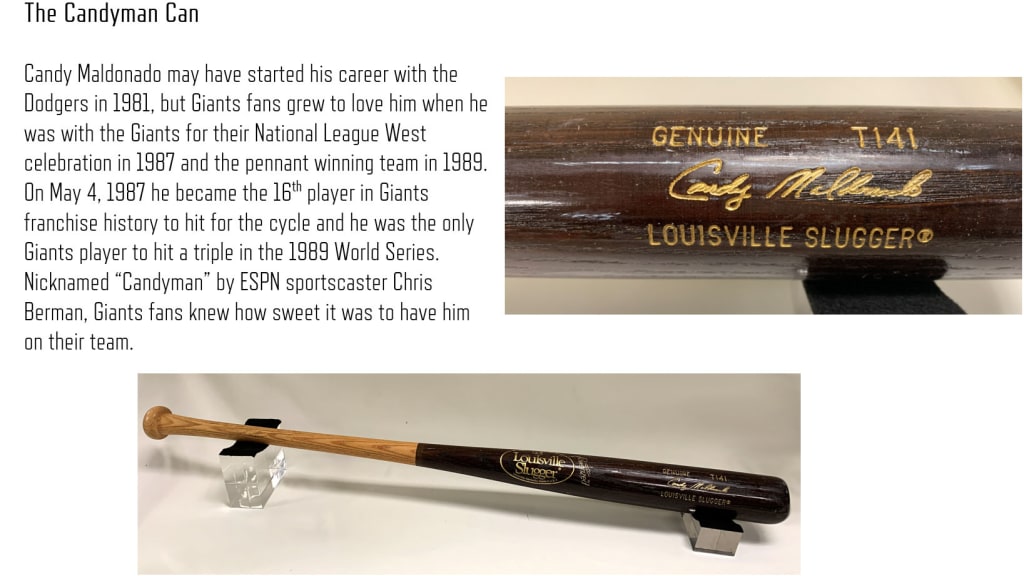 Tell It Goodbye
On September 30, 1999 over 61,000 fans said goodbye to baseball at Candlestick Park with a post-game party for the ages.

Dave Dravecky
“It’s not what you do that matters most, it is who you are.” - Dave Dravecky. To learn more about Dave Dravecky, his story and his foundation, please go to www.endurance.org 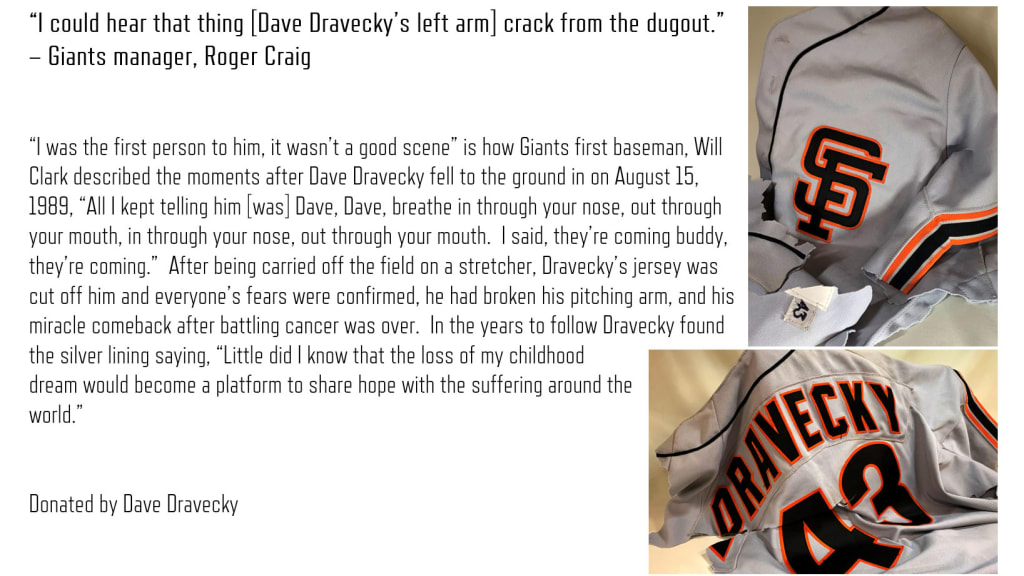 1989
After winning their first National League pennant in 27 years, the 1989 Giants ignited the championship flame in San Francisco that glows to this day. 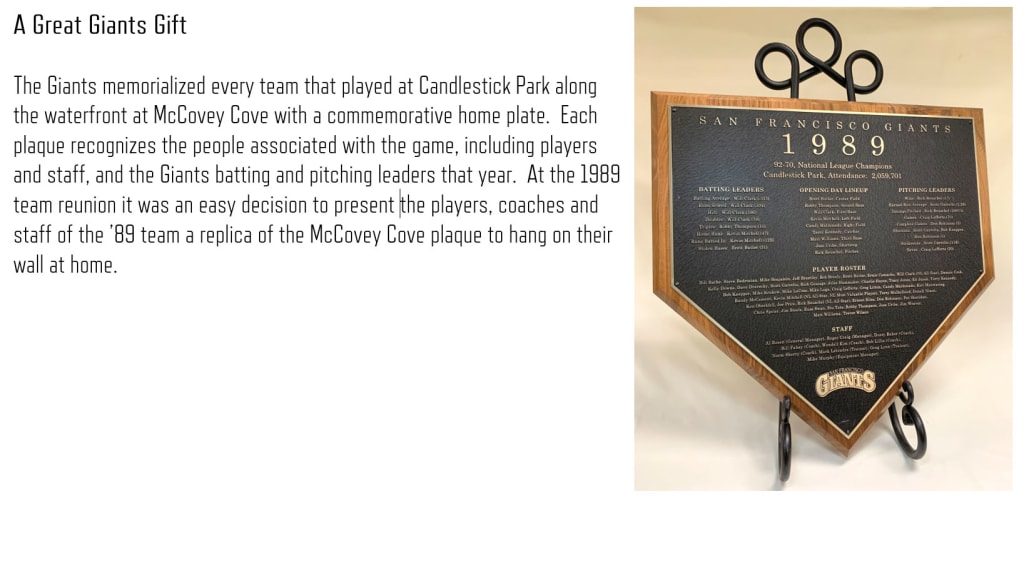 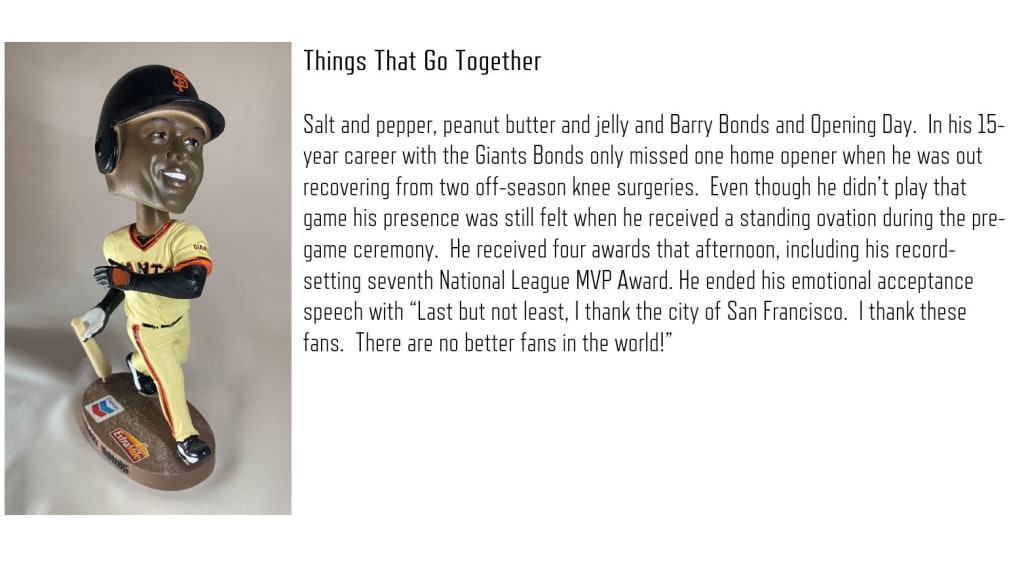 1904
The 1904 season began an exciting time in Giants history, with ramifications that are felt to this day. 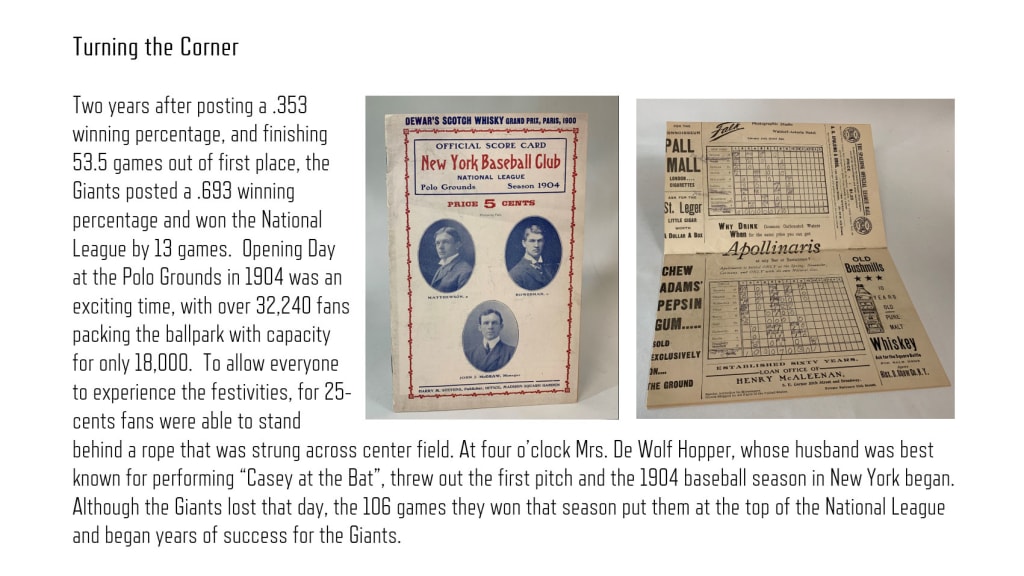 Minor Leagues
In 2019 the Giants minor league affiliates combined to go 415-401 (.509) and had the 11th-best organizational winning percentage in the minors. To top it off, Sacramento (AAA), San Jose (A), Augusta (A), Salem-Keizer (A) and the AZL Giants Orange (R) all made the playoffs in their respective leagues. 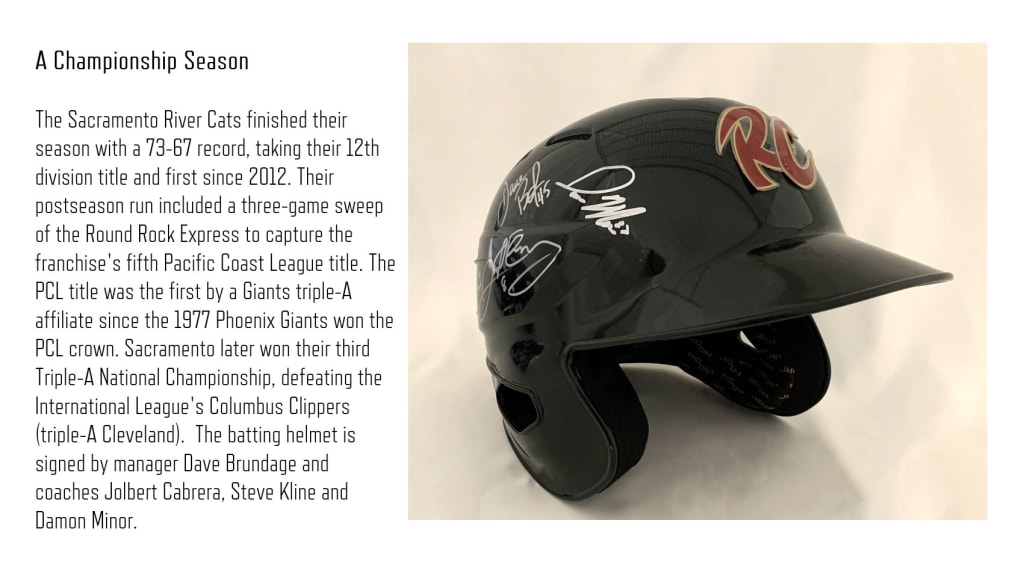 Housed in a 5,000 square foot building, the Giants Archives consists of memorabilia and artifacts from our team’s 138-year history. This treasure trove includes collectables such as the Giants “Creation Letter” from 1882, the “GIANTS” letters which once sat atop the Polo Grounds in 1957 and the batting helmet Pablo Sandoval wore when he hit three home runs in the first game of the 2012 World Series. As part of the Giants Fan Page, fans can now, for the first time, learn about and view memorabilia from our collection. When we are able to return to Oracle Park items from our collection can be found either on the Alaska Airlines Club Level displays behind home plate or in the Giant Vault located off the O’Doul Gate.
Cain Perfect - Teamwork
Matt Cain made history on Wednesday, June 13, 2012 when he threw the first perfect game in franchise history, but even during a perfect game, baseball is a team sport. 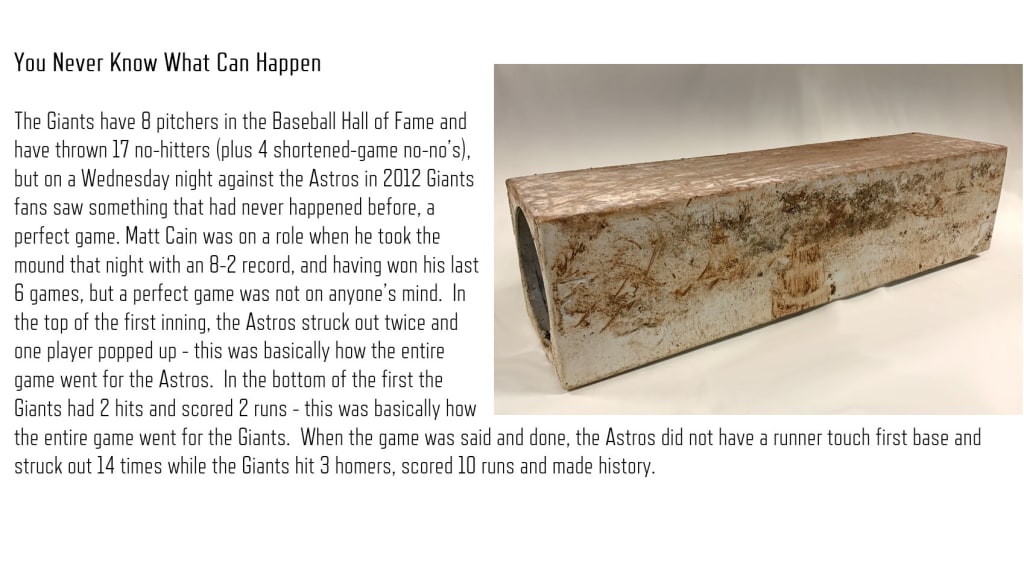 Croix de Candlestick
“Veni, Vidi, Vixi” - I came, I saw, I survived – was a rallying cry at Candlestick from 1983-1999. Fans who braved the elements during an extra-inning night game were awarded an official Croix de Candlestick, demonstrating their loyalty and devotion to the Giants. 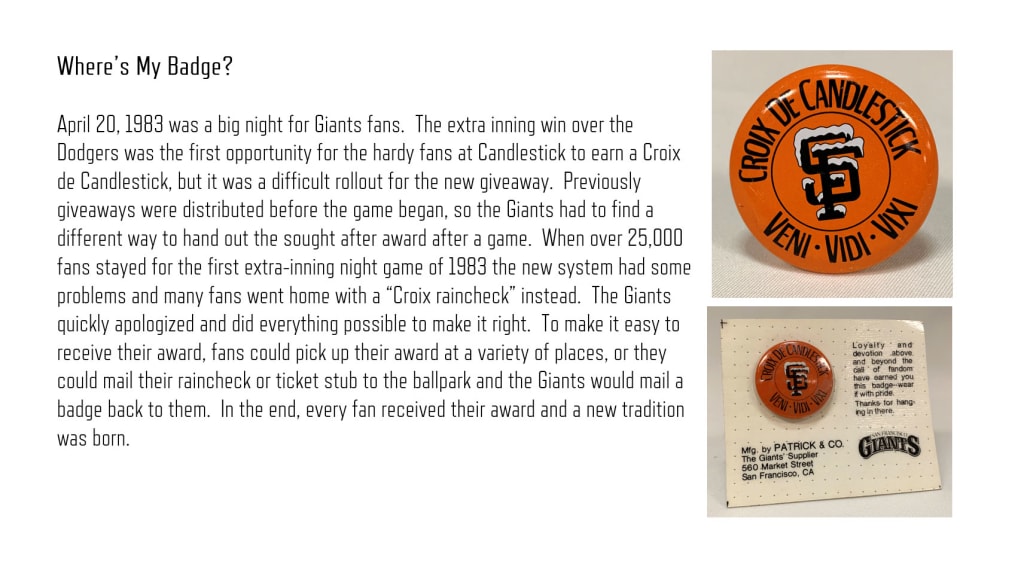 Hank Greenwald
Little did anyone know when Hank Greenwald was born on June 26, 1935 in Detroit that he would become an icon to San Francisco Giants fans. 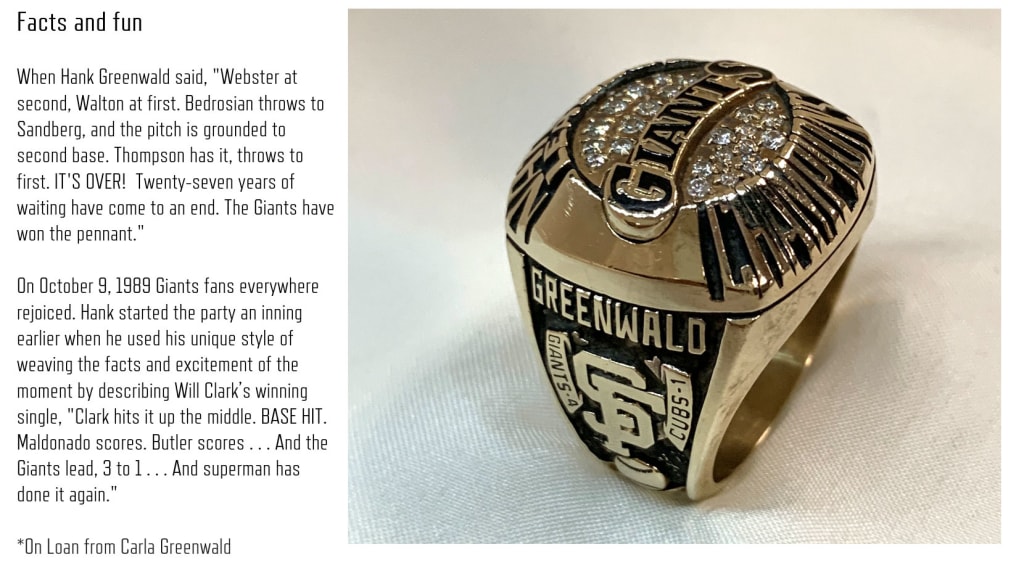 Tell It Goodbye
Using Lon Simmons’ tag line “Tell It Goodbye”, the Giants celebrated the end of the millennium and the final year of baseball at Candlestick/3Com Park in 1999.

The ones that got away
Third baseman, Al Gallagher was the first player the Giants drafted in the inaugural First-Year Player Draft in 1965. In the 55 years between Gallagher and catcher, Joey Bart (who the Giants signed in 2019) the Giants have had 75 first round picks (including supplemental rounds), but some great athletes ended up on other teams. 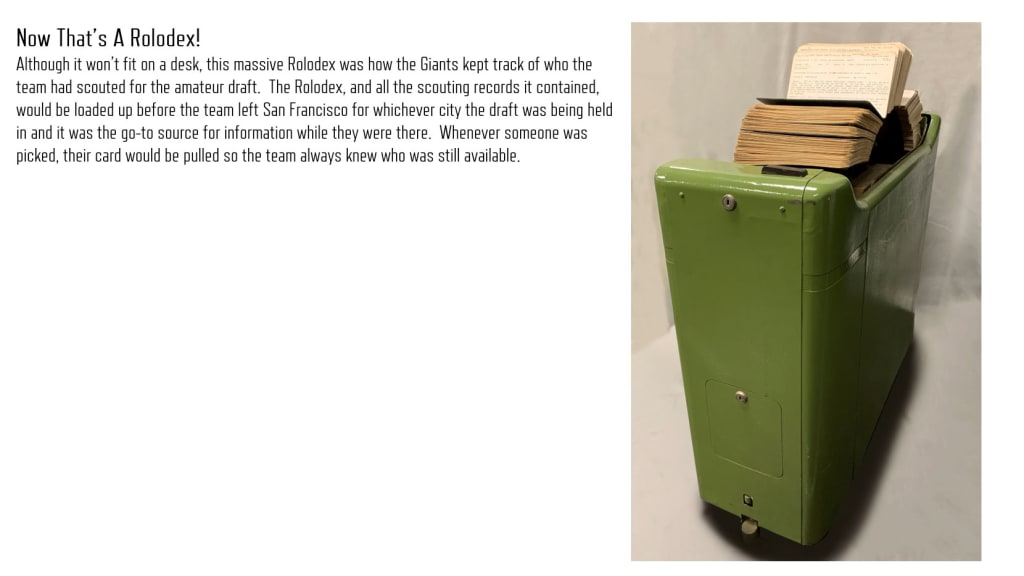 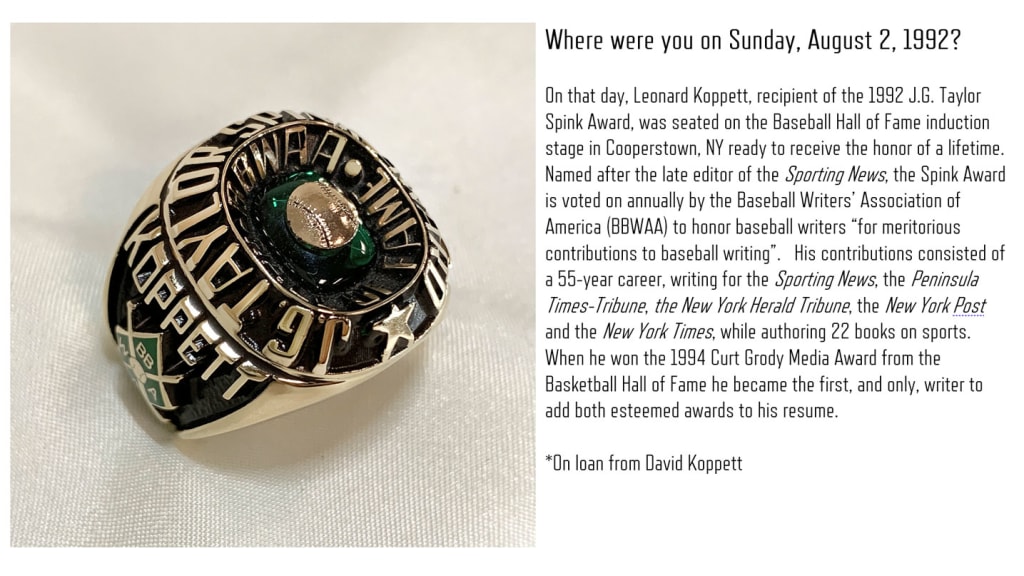 The Shot Heard ‘Round The World 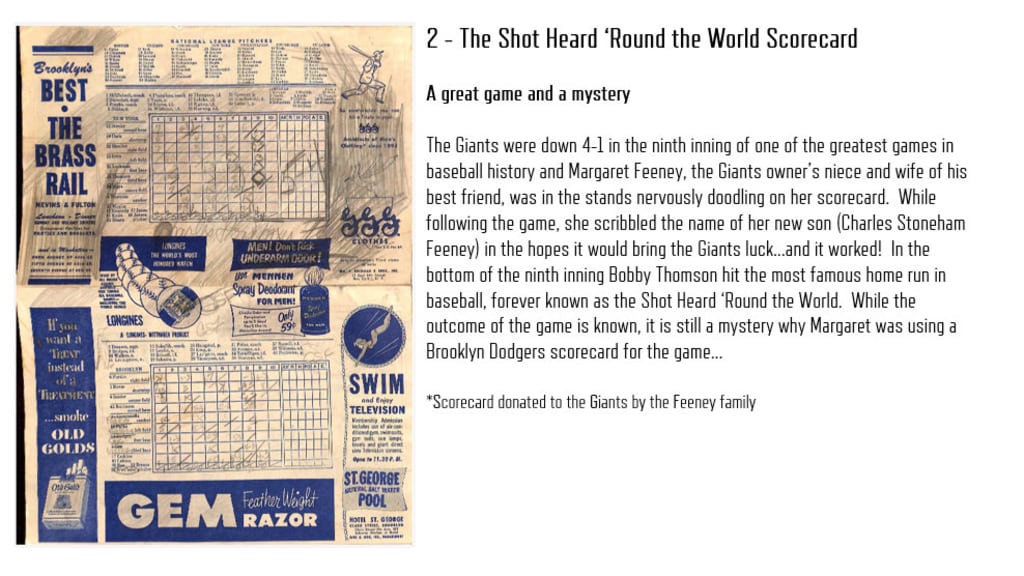 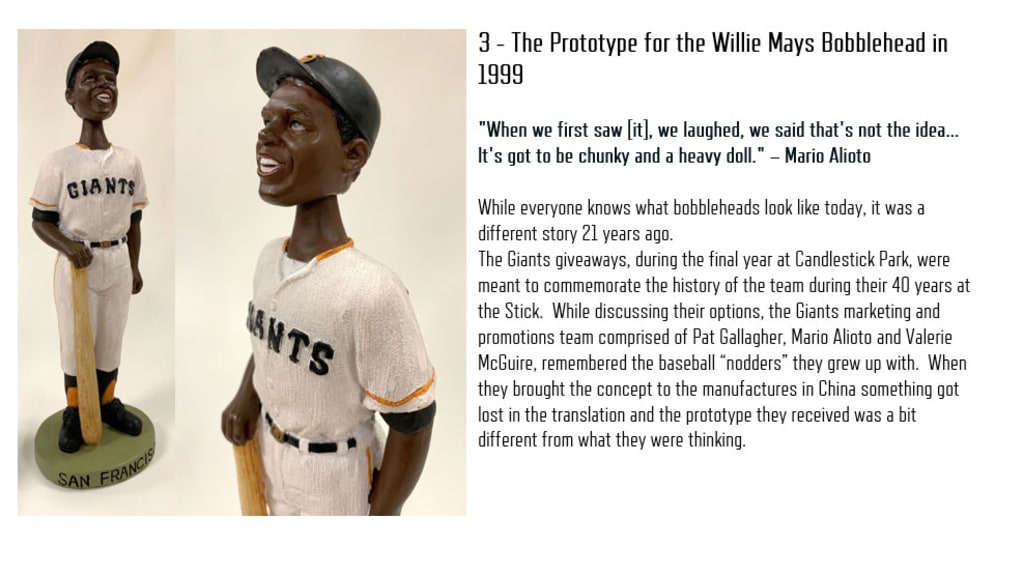 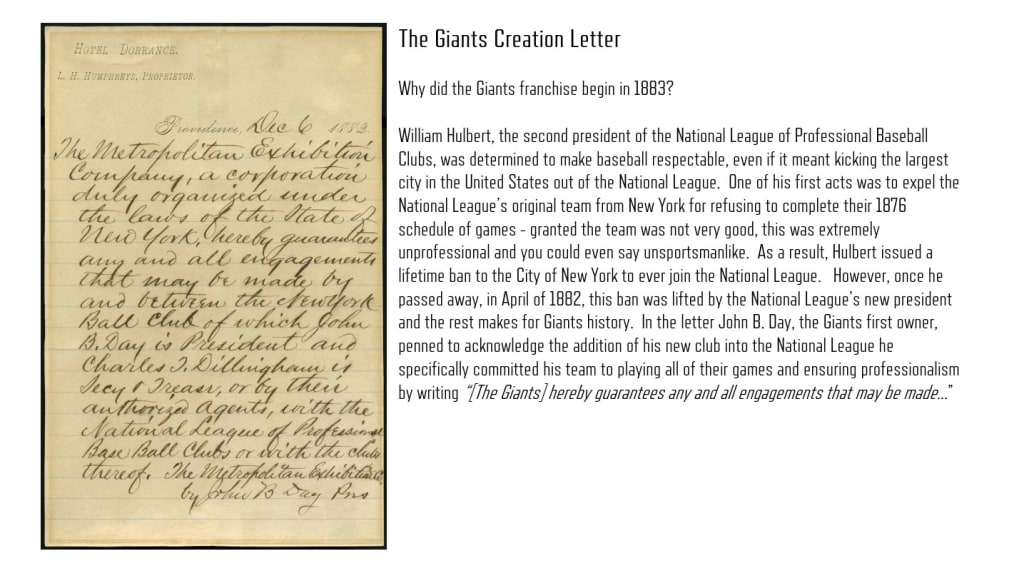