JOIN US FOR THE
BATTLE OF THE BASES CHAMPIONSHIP GAME
SATURDAY, SEPTEMBER 18
UNDER THE LIGHTS AT NATIONALS PARK

FEATURING:
JOINT BASE ANACOSTIA-BOLLING
VS.
JOINT BASE MYER-HENDERSON HALL

The Battle of the Bases championship softball game will begin at 8:00pm or 30 minutes after the last out of the 4:05pm Nationals vs. Rockies game, whichever is later.

Fans attending ONLY the softball game will be permitted to enter through the Third Base Gate 10 minutes after the last out of the Nationals vs. Rockies game or 7:30pm, whichever is later.

Personnel with appropriate ID (DoD or other Federal Agencies) may park on Fort McNair or the Washington Navy Yard on a space-available basis and walk to Nationals Park. 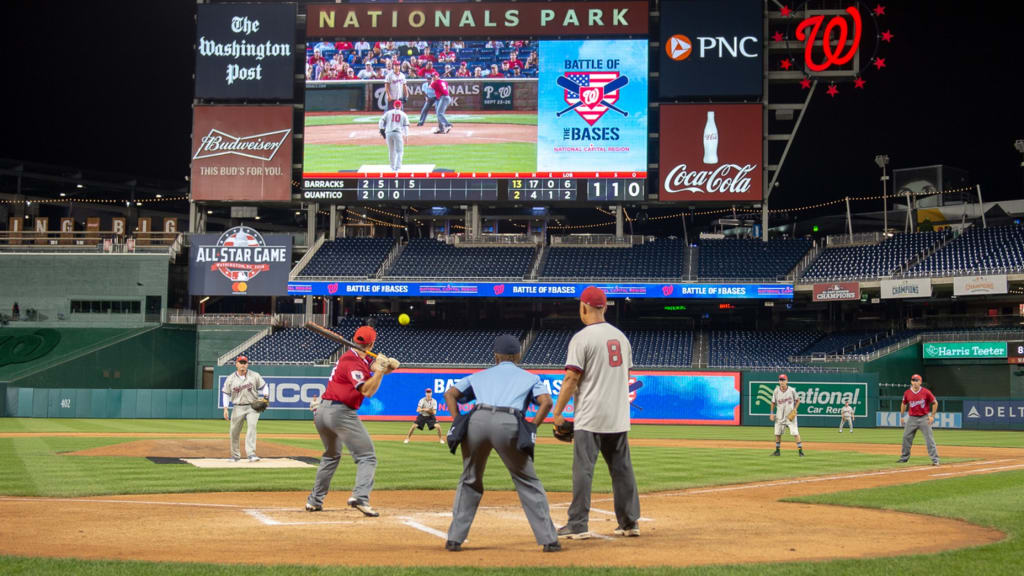 Join us postgame September 18 for the Battle of the Bases Championship game.

Battle of the Bases is a military softball tournament, presented by the Washington Nationals, that serves as an extension of the intramural season at each of the military bases in the National Capital Region.

Teams of active duty service members from all six branches, playing across all National Capital Region installations, participate in the tournament. Preliminary rounds of the Battle of the Bases were held on Joint Base Anacostia-Bolling in August to determine which bases would play in a Championship game under the lights at Nationals Park. The Championship game will be a postgame event following the September 18, 4:05pm game against the Colorado Rockies.

The Washington Nationals provide, at no cost to the service branches, a Nationals-branded jersey and cap to each man or woman participating in the base-affiliated intramural softball league. Teams are differentiated through the use of a variety of styles and colors of jerseys and caps. Each of the base leagues affiliated with the uniform program were allowed to enter two teams in the tournament, and will be honored pregame on September 18. 2021 participants included:

Through the Nats on Base initiative, the Nationals aim to provide year-round experiences that contribute to the quality of life for service members and their families in the Washington D.C. region, reaching them where they live and work - as well as in-Park. The team works with regional and base leadership to develop programming and identify outreach opportunities at local installations.

The Nationals are proud to offer programming that contributes to the quality of life for service members and their families in the Washington, D.C. region. Discounted tickets for military personnel are available on-base and online.