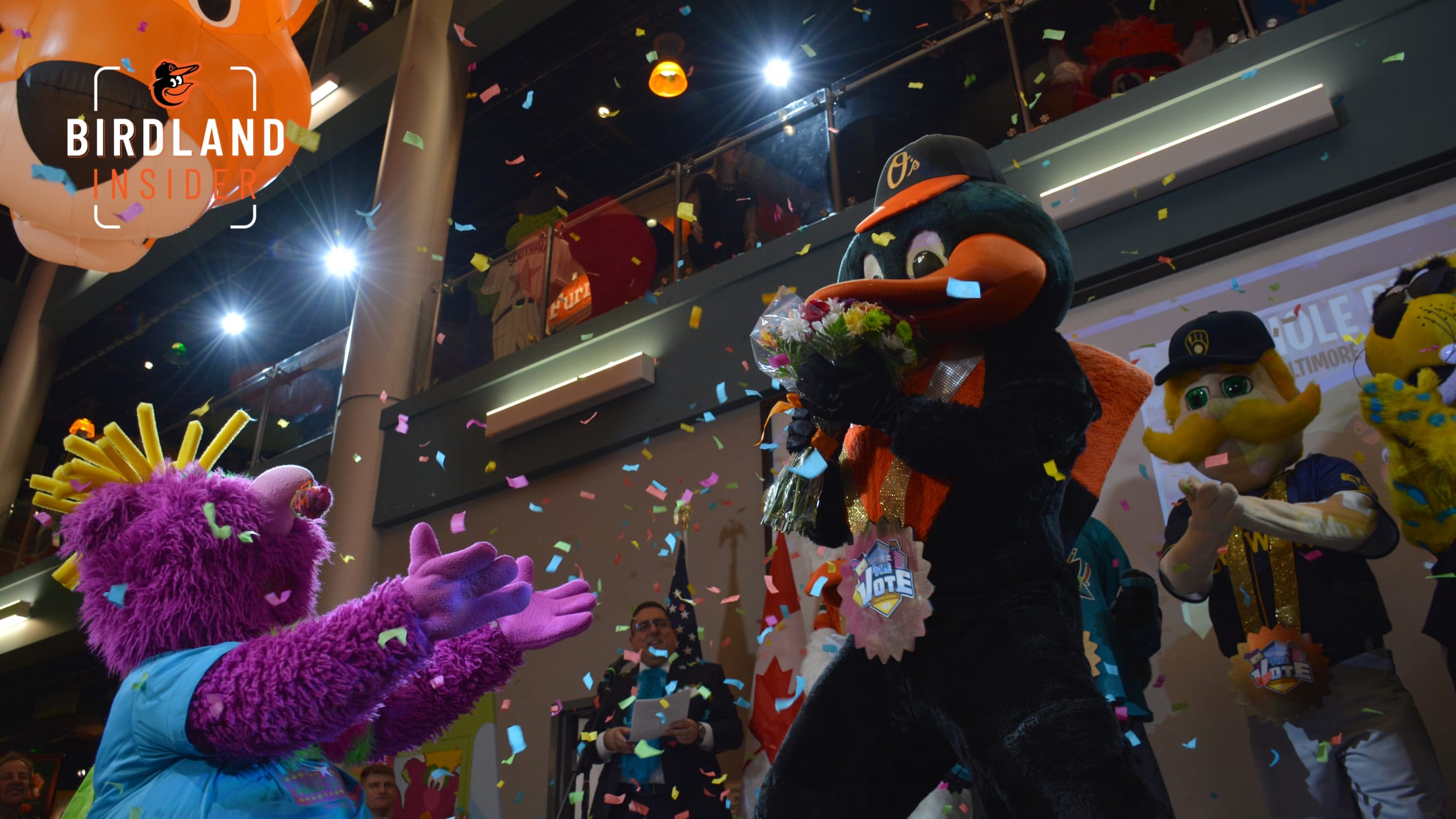 The Bird, Mascot Hall of Famer. The dugout dancing, feathered friend of Birdland has symbolized Orioles spirit and passion for over 40 years. The Oriole Bird has cheered on his team during momentous milestones, including World Series and division championships and positively impacted the Baltimore and Sarasota communities at hospital visits, community parades, and youth league games. Not to mention, he has made great friendships along the way with fans, mascots, and celebrities too. Now, after all these years, The Oriole Bird has finally achieved mascot immortality, to join alongside some of the greats like the Phanatic, Benny the Bull, and Big Red. The Oriole Bird is a Mascot Hall of Famer.

Fans can tune in live to watch the virtual ceremony on Sunday, June 14 at 1pm EST on MascotHallofFame.com.

But how did The Bird get here?

Mr. Oriole
Before the loveable mascot we know as The Oriole Bird hatched, a different mascot had a brief stint as the Orioles head cheerleader: Mr. Oriole. Created by Dick Armstrong, the team’s first Public Relations Director, Mr. Oriole was the first live mascot in Major League Baseball.

In early 1954, Armstrong was seeking the public’s help in developing a caricature of an Oriole that could be used as the logo of his new Baltimore-based team. Armstrong remembered, “I was looking for a jaunty but likeable bird, one with plenty of personality…one stood out above all the rest…submitted by Jim Hartzell, a cartoonist for the Baltimore Sun. We named our new mascot ‘Mr. Oriole’ and his perky bird face was quickly popularized.” When introduced to the sea of Orioles fans in 1954, Memorial Stadium erupted in applause, but the most notable feature of Mr. Oriole was not his look, rather it was his musical ability. After being introduced to the fans, he took out a trumpet from under his wing and played it through his beak. Something unlike anything fans will see in modern days!

The Oriole Bird
Ultimately, Mr. Oriole only lasted until the 1955 season. Then, on April 6, 1979, The Oriole Bird would hatch by the pitcher’s mound at Memorial Stadium. A much more feathered Oriole than what The Bird looks like today, he wore a cap similar to the players on the field that featured the original Cartoon Bird logo with a white front panel. 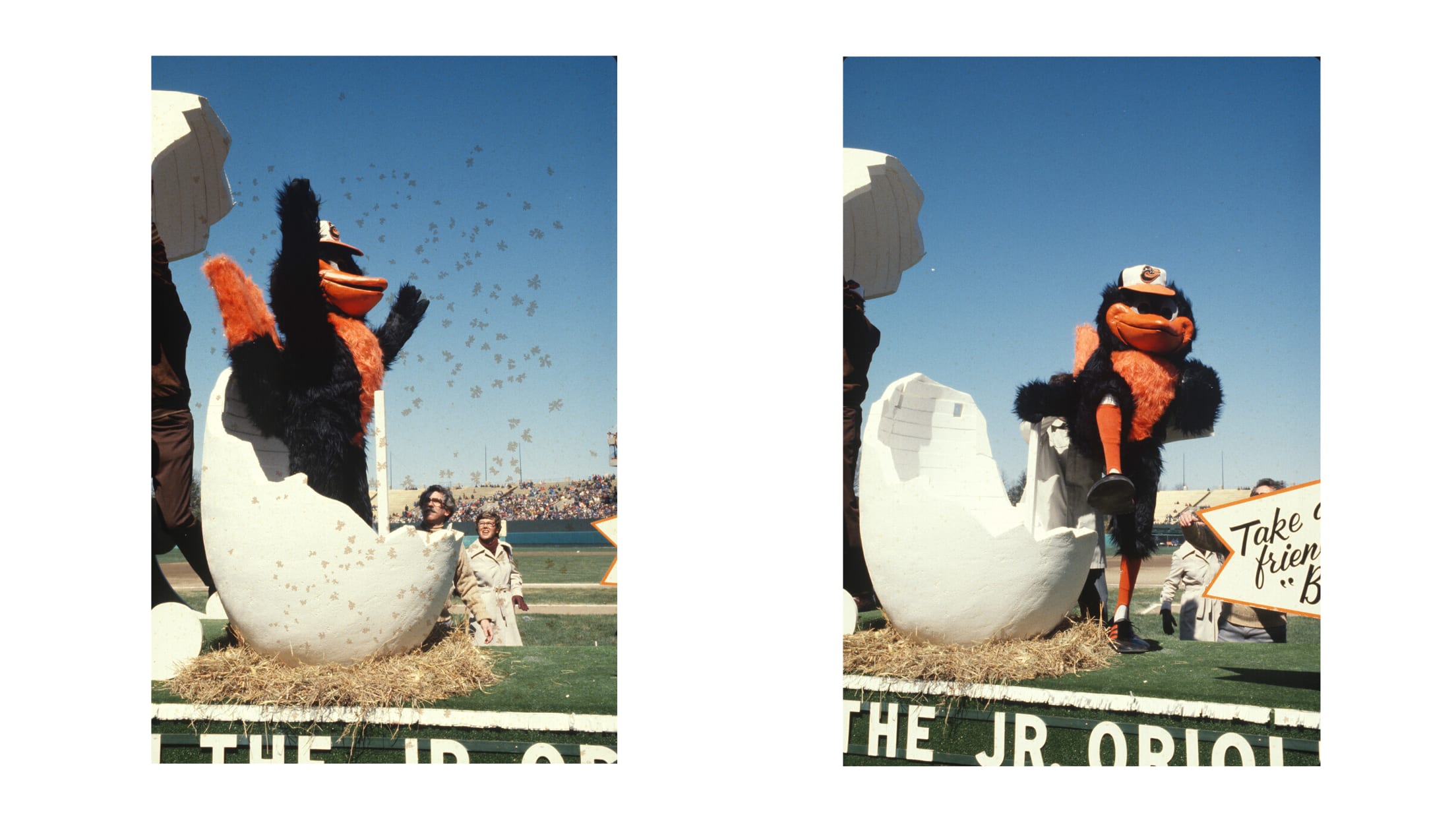 Modern-Day Bird
It would not be until the early 1990s, when the Orioles began to play at Oriole Park at Camden Yards, for The Bird to have the modern, familiar look. He wore a cap with the ornithologically correct bird and eventually the lifelike Oriole logo as the years went on.

In 2013, when the team transitioned into the new cartoon bird logo (still used to this day), the Bird changed caps again with the cursive O logo to match the Oriole on the primary team logo.

Memorable Orioles Moments
As fans throughout the Orioles history can remember the team’s greatest moments on the ballfield, the Oriole Bird was right there celebrating along with you.

Interesting Places & Events
Oh, the places the Bird will go. The Bird has been lucky enough to visit unique places all around the world.

Friendships Made
The Bird has made countless friends throughout the years with thousands of photos taken.

Cheers & Antics
There are many fan favorites when it comes to The Oriole Bird cheers and antics.

Impactful Community Events
It is hard to pick and choose community events, but here are some of The Bird’s recent favorites.