The Orioles and PNC Bank have partnered to bring unique murals created by local artists to Oriole Park. This collaboration intends to highlight Baltimore's vibrant arts community and allows Orioles fans to experience the incredible talents of several individuals.

Located in the Orioles Legends Park beyond the bullpens in center field, the mural created by artist Ernest Shaww in collaboration with Open Walls Baltimore curator Gaia, features Hall of Famers ROY CAMPANELLA, BIZ MACKEY, and JUD WILSON, along with Maryland native ERNEST BURKE. Campanella, regarded as one of the premier catchers in baseball history, played for the Baltimore Elite Giants from 1937-45 before signing with the Brooklyn Dodgers in 1946 after Jackie Robinson had broken the color barrier in organized baseball. He was elected to the Hall of Fame in 1969. Mackey, who was elected to the Hall of Fame in 2006, spent two years with the Baltimore Black Sox and four with the Elite Giants as a player-manager and is credited with having tutored players who went on to have tremendous success in the Major Leagues, including Campanella, Monte Irvin, and Larry Doby. Wilson, a hard-hitting third baseman, slugged his way to the Hall of Fame over a 21-year career, including nine seasons with the Black Sox. Considered one of the most feared hitters in the Negro Leagues, he was elected to the Hall of Fame in 2006. Burke, who was born in Havre de Grace, was a pitcher and outfielder for the Elite Giants from 1946-49.

The mural also features a Sankofa bird in a baseball glove. According to Shaw, the Sankofa is an Adinkra symbol, originally created by the Akan of West Africa. The Sankofa is a bird with its head turned backward taking an egg from its back. It illustrates the importance of remembering and honoring the past and using that information for positive progress moving forward, a concept deeply ingrained in honoring the history of the Negro Leagues.

About the Artist: A native of West Baltimore and a product of Baltimore City Public Schools, Baltimore School for the Arts, Morgan State University, and Howard University, Shaw credits his hometown with having taught him the meaning of perseverance, community, and integrity. His primary subjects reflect the multiple aspects of the Black/Africanist experience in the context of a society that confines Blackness to being the antithesis to whiteness and a response to racialized subjugation.

The mural, located under the video board between the center field bleachers and Eutaw street, was created by local graffiti writer Adam Stab in collaboration with Open Walls Baltimore curator Gaia, along with artists Jeffrey Evers, Dave Diggian, Damian Disantis, Leonard Bateman, Andrew Funk, and Jennifer Weightman. It is comprised of two sets of walls. The ballpark side on the concrete behind the center field bleachers reads "Baltimore" and "Orioles Magic" and depicts baseball scenes with the Oriole Bird swinging a bat, playing catch, and cheering. The Eutaw Street side reads "Take Me Out to the Ballgame" and depicts concessions-based ballpark scenes.

About the Artist: Baltimore's longest-active graffiti writer, Stab attended the Baltimore School for the Arts and has enjoyed a successful and diverse career in the visual arts as a graphic designer, painter, and muralist. He is credited with being part of an era of writers that have defined the "Baltimore handstyle."

The Birdland Murals series began in 2019 and featured local female artists as part of the Orioles’ yearlong celebration of women’s equality and girls’ empowerment in honor of the 100th anniversary of the ratification of the 19th Amendment in Aug. 2020. The Orioles and PNC selected local female artists to serve as the leads on these projects. 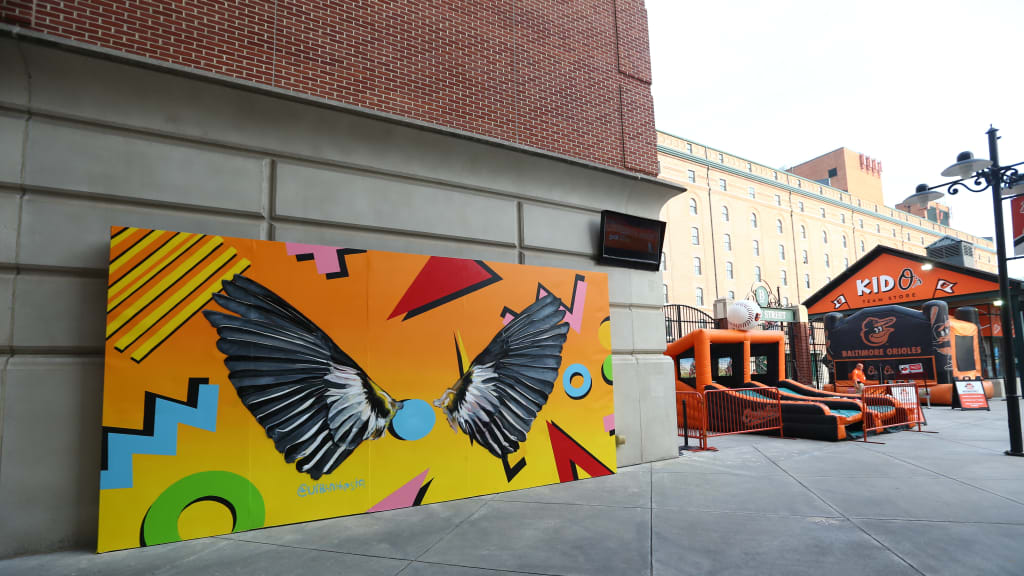 The mural installation created by Red Swan Walls, located on the back of the center field scoreboard on the Budweiser Roof Deck, features a pair of Oriole birds. Hanna Moran and Lindy Swan like to combine realistically rendered elements, such as oversized flora and fauna, with colorful and dynamic abstract patterns to design and paint bold, unique walls throughout the greater Baltimore and D.C. areas.

Selfie Wall mural installation was completed by Baltimore native Megan Lewis, a multi-disciplinary illustrator. The mural, located in Kids’ Corner, features a set of oversized bird wings over bold colors and geometric shapes. Known for her bold colors and wearable brand Blk Women Period, Lewis utilizes various mediums to create works of art that focus on stories that reflect a critical view of social, historical, and cultural issues all inspired by Blk Women images. Lewis has been and continues to be an active and well-regarded member of Baltimore’s thriving arts community.