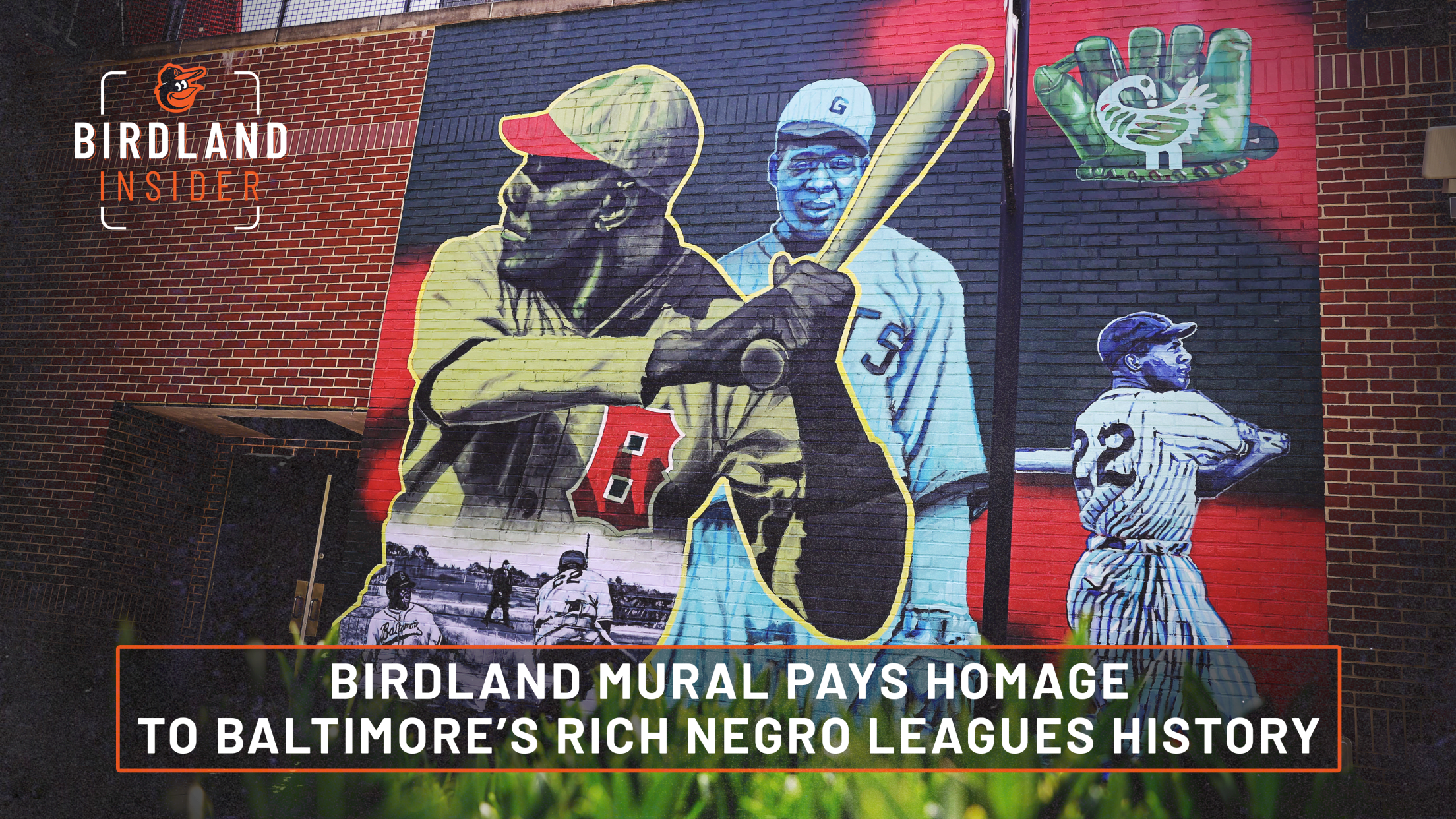 Baltimore has always been a baseball city. It’s the birthplace of Babe Ruth, hometown of the Orioles, and home to The Ballpark That Forever Changed Baseball™. Charm City also has a rich and storied history of Negro Leagues baseball. The latest Birdland Mural, designed by West Baltimore native Ernest Shaw in collaboration with Open Walls Baltimore curator Gaia, pays homage to some of the most iconic figures in Baltimore’s Negro Leagues history.

Campanella, one of the best catchers in baseball history, played for the Baltimore Elite Giants (pronounced “ee-light”) from 1937-45 before signing with the Brooklyn Dodgers in 1946 after Jackie Robinson had broken the color barrier in organized baseball. He would go on to win three MVP awards and was named an All-Star in eight consecutive seasons from 1949-56. In 1955, he helped lead the Dodgers to their first World Series championship. After a tragic car accident cut his career short in 1958, Campanella was elected to the Hall of Fame in 1969.

Mackey, who spent two years with the Baltimore Black Sox and four with the Elite Giants as a player-manager, is also considered one of the greatest catchers of his era. He is credited with having tutored players who went on to have tremendous success in the Major Leagues, including Roy Campanella, Monte Irvin, and Larry Doby. He was elected to the Hall of Fame in 2006.

Wilson, a hard-hitting third baseman, slugged his way to the Hall of Fame over a 21-year career, including nine seasons with the Black Sox. He was known throughout the Negro Leagues as “Boojum,” an onomatopoeia based off the sound of his hits bouncing off the outfield walls. Considered one of the most feared hitters in the Negro Leagues, Wilson was elected to the Hall of Fame in 2006.

Burke was born in Havre de Grace in 1924. He enlisted in the United States Marine Corps at the outbreak of World War II at just 18 years old and fought with a segregated unit in the Pacific Theatre as one of the Marine Corps’ first Black marines. Upon returning home, he enjoyed a six-year career as a pitcher, outfielder, and third baseman in the Negro Leagues, including three seasons with the Elite Giants from 1946-48. Earlier this summer, a statue of Burke was unveiled at Tydings Park in Havre de Grace.

The mural also includes a Sankofa bird in a baseball glove. According to artist Ernest Shaw, the Sankofa is an Adinkra symbol, originally created by the Akan of West Africa. The Sankofa is a bird with its head turned backward taking an egg from its back. It illustrates the importance of remembering and honoring the past and using that information for positive progress moving forward, a concept deeply ingrained in honoring the history of the Negro Leagues.

Shaw credits being a native of West Baltimore with teaching him the meaning of perseverance, community, and integrity. As a product of Baltimore City Public Schools, Baltimore School for the Arts, Morgan State University, and Howard University, Shaw recognizes the importance of using his skills and talents for the betterment of others, not simply for his own self-aggrandizement. For Shaw, teaching is also an artistic medium. Fans interested in seeing more of Shaw’s work can follow him on Instagram at eshaw_art.

A mural paying tribute to Hall of Fame pitcher Leon Day, who spent the 1934 season as a member of the Baltimore Black Sox and 1949-50 with the Elite Giants, is being planned for the future. Raised in Baltimore, Day served his country as a member of the 818th Amphibious Battalion of the United States Army in World War II. Day, who was known for his soft-spoken demeanor and dominance on the mound, was elected to the Hall of Fame in 1995.

The Birdland Murals series, powered by PNC Bank, is a collaboration between the Orioles and PNC which highlights Baltimore’s vibrant arts community and allows Orioles fan to experience the incredible talents of several local artists. Earlier this year, local graffiti writer Adam Stab unveiled his mural located under the video board between the center field bleachers and Eutaw Street.

The mural features two sets of walls. The ballpark side on the concrete behind the center field bleachers reads “Baltimore” and “Orioles Magic” and depicts baseball scenes with the Oriole Bird swinging a bat, playing catch, and cheering. The Eutaw Street side reads “Take Me Out to the Ballgame” and depicts concessions-based ballpark scenes. The mural is located below the 2019 installation by Red Swan Walls.

The Birdland Murals series began in 2019 and featured local female artists as part of the Orioles’ yearlong celebration of women’s equality and girls’ empowerment in honor of the 100th anniversary of the ratification of the 19th Amendment in August 2020. The first mural, located in Kids’ Corner and featuring a set of oversized bird wings over bold colors and geometric shapes, was created by Baltimore native and multi-disciplinary illustrator Megan Lewis.

The second mural installation, created by Red Swan Walls, a women-owned, Baltimore-based mural studio run by Hanna Moran and Lindy Swan, is located on the back of the center field scoreboard on the Budweiser Roof Deck and features a pair of Oriole birds.

Fans are encouraged to share photos of themselves with the murals using the hashtag #BirdlandMurals. For more information about Birdland Murals powered by PNC Bank, please visit Orioles.com/Murals.