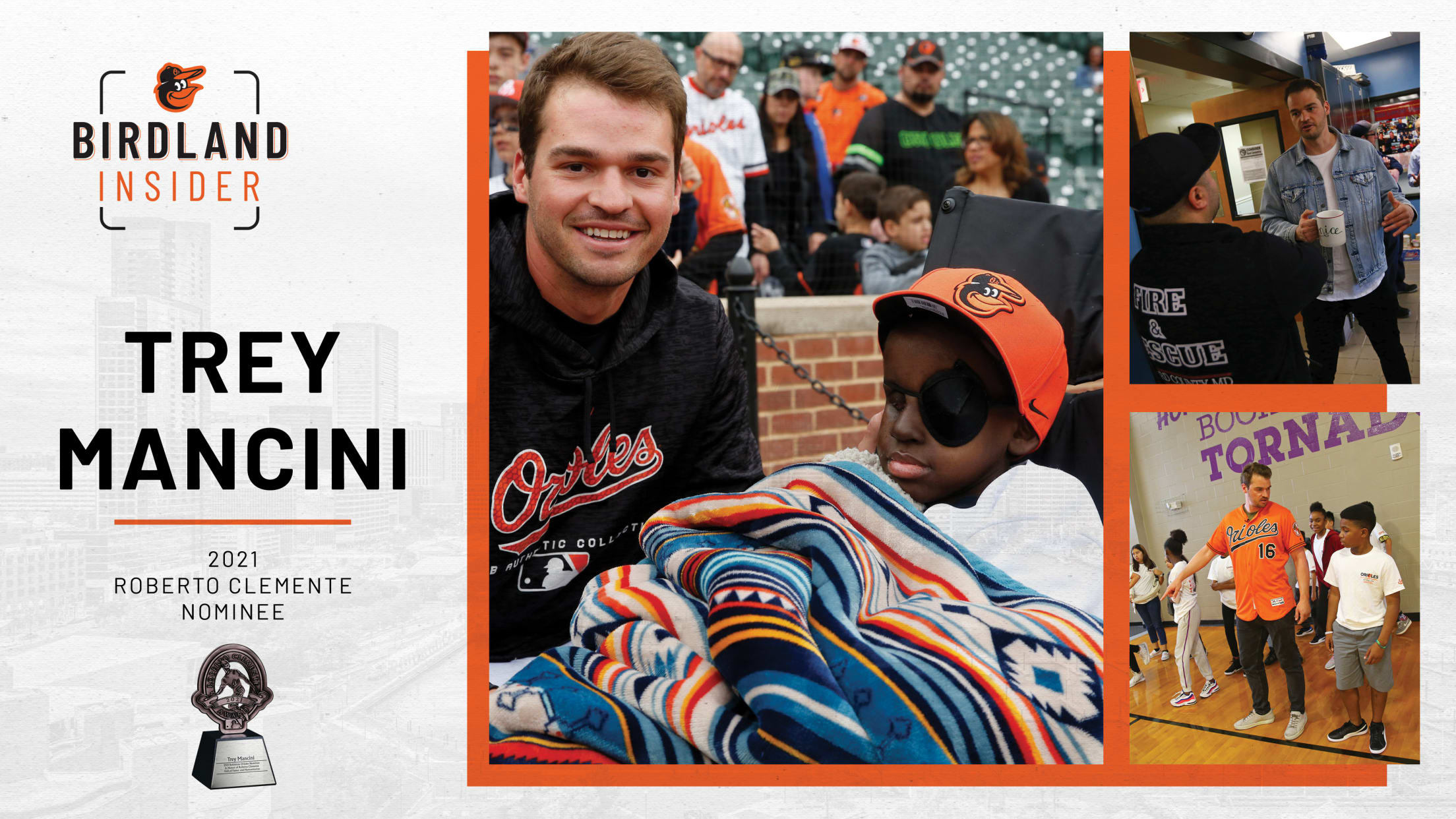 Orioles infielder Trey Mancini has always been focused on giving back to his community. From participating in club initiatives, proactively working with organizations in his spare time, and forming his own foundation, his compassion is evident in everything he does. In recognition of his efforts, the Orioles and Major League Baseball have named Mancini the Orioles’ 2021 nominee for the prestigious Roberto Clemente Award.

The most prominent individual player award bestowed by MLB, the Roberto Clemente Award is the annual recognition of a player from each club who best represents the game of baseball through extraordinary character, sportsmanship, community involvement, philanthropy, and positive contributions, both on and off the field, all of which Mancini represents, ten-fold.

“I don’t even know where to begin with Roberto Clemente,” shared Mancini. “Obviously, I wasn’t alive to watch him play. But I learned a lot about him growing up and he’s one of my favorite players, so to be the Orioles’ nominee for this award is a dream come true. It really is.”

As part of this nomination and in recognition of Mancini’s exemplary commitment to serving his community, MLB will make a $7,500 donation to The Food Project, a Baltimore organization that brings cooking, farming, restaurant skills, job opportunities, sustainable food sources, mentorship, and hope to the youth of Southwest Baltimore.

It’s one of the greatest honors that I’ve received in my entire career.

In March of 2020, Mancini, a then 27-year-old athlete coming off the best season of his career, was diagnosed with Stage III Colon Cancer during Spring Training. As the world began to shut down due to the COVID-19 pandemic, Mancini had surgery to remove a malignant tumor from his colon, and just a few weeks later, began a six-month-long chemotherapy treatment that subsequently drained all energy and motivation from his body.

While the fight against colon cancer was no easy feat, Mancini refused to let it define him. Instead, his diagnosis quickly became a springboard to giving back and inspiring those most in need. While baseball went to the backburner, fighting his cancer battle was quickly joined as top priority with impacting and inspiring his community.

After his diagnosis and throughout his treatment, Mancini became heavily involved with the Colorectal Cancer Alliance (CCA), joining their “Never Too Young” advisory board. He advocated for all young-onset patients and survivors and used his social platforms to raise awareness and critical funds for CCA. Mancini, along with the Baltimore Orioles, launched the #F16HT campaign, which integrated his jersey number and the word ‘fight’ to inspire others to push through battles with illness, social injustice, and of course, COVID-19. The team sold “#F16HT” t-shirts, which raised more than $80,000, all to support the Colorectal Cancer Alliance Patient and Family Support Services.

While Mancini has helped inspire those battling colon cancer, he also started The Trey Mancini Foundation, which works to support those who are facing illness, empowers those suffering from emotional trauma, and provides assistance to those experiencing hardship. Mancini has always been incredibly kind and spirited with a passion for helping others.

Though cancer awareness was not a part of the original mission of The Trey Mancini Foundation, they quickly took on this cause and launched a partnership with CCA. Mancini lent his time through meet and greets and shared information on his social media channels regarding early detection and preventative measures for colon cancer. Mancini worked with Squatty Potty, a toilet stool that positions your body in a natural, comfortable squat, to provide 10,000 colon cancer screenings to underserved communities.

Mancini also recorded countless messages for fans who have reached out to him sharing stories of personal struggle. During National Cancer Survivors month in June, Mancini met virtually with cancer survivors to discuss the victories and defeats of dealing with life after a cancer diagnosis. He also welcomed his oncologist from the Johns Hopkins Kimmel Cancer Center to throw out the first pitch.

Most recently, Mancini’s foundation has partnered with a Frederick, Md., branch of Blessings in a Backpack, a national organization that feeds elementary-aged children on weekends who face food insecurity. In July, The Trey Mancini Foundation, Blessings in a Backpack, and the Orioles hosted an essential items drive raising more than $2,800 and collecting over 1,000 pounds of food for children in need in the Baltimore Area.

Prior to the creation of his foundation, Mancini hosted a charity tailgate which raised nearly $20,000 to support young Orioles superfan Mo Gaba, one of the most passionate and devoted fans in franchise history, who endured four different battles with cancer. Mancini and Mo had a close connection prior to his own cancer diagnosis and Mo’s untimely passing in July of 2020. Mancini invited Mo to Orioles games, took him out for different activities, visited him at his home, and purchased clothing and meals for Mo and his mom, Sonsy.

Coming off one of the most challenging years of his life, Mancini has not slowed down on the baseball field, appearing in 132 of Baltimore’s 143 games as of September 13. The runner-up in the 2021 Home Run Derby, Mancini has slugged at least 20 home runs for the fourth consecutive season, and his four seasons with 20+ homers rank tied for ninth in franchise history (since 1954). He hit career home runs No. 99 and 100 in his 531st career game on June 20, becoming the fastest player in Orioles history, who began their career with Baltimore, to reach the milestone.

“We’re all super proud of him and pulling for him to win it,” said Orioles manager Brandon Hyde. “It’s a very special award and to just be nominated is an amazing accomplishment. We’re pulling for him.”

Mancini is a fierce competitor, an elite baseball player, a Home Run Derby runner up, and an inspiration for all generations through his determination to never give up the #F16HT.

Beginning on Wednesday, September 15, and continuing until the conclusion of the regular season on Sunday, October 3, fans can vote for the overall winner of the Roberto Clemente Award at mlb.com/clemente21.