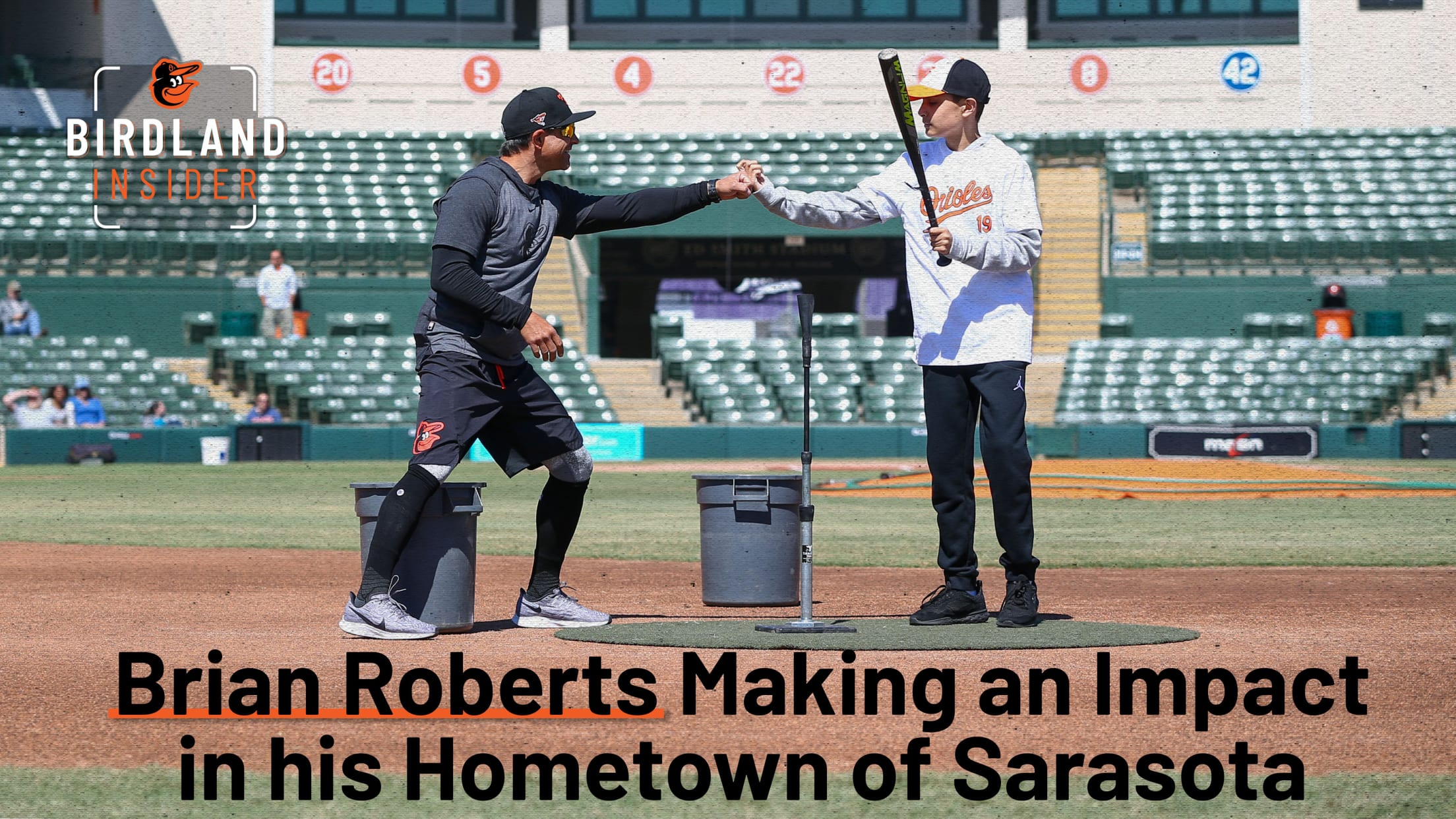 Ever since his rookie year in 2001, Brian Roberts had grown accustomed to his offseason routine. The second baseman would spend his winters working out in Arizona before packing up and heading to Fort Lauderdale each February for Spring Training. It was a familiar destination. His wife, Diana, had grown up there, and it was home to the Orioles’ Spring Training operations.

But in 2010, for the first time in his career, the two-time All-Star would depart from Arizona and head to a different region of the Sunshine State. The Orioles had found a new, year-round Florida home at Ed Smith Stadium in Sarasota.

“I think we were all very excited,” Roberts recalled of the club’s move. “Our time in Fort Lauderdale was good, but we knew that [Sarasota] was just such a different feel – the city, the town, the atmosphere, the stadium, everything. It was a breath of fresh air for all of us.”

It didn’t take long for Brian and Diana to feel a connection to the city. They rented a place during that first Spring Training and immediately fell in love – with the restaurants, the atmosphere, the lifestyle, everything. The couple, who married in 2009, had been wanting to move back east to be closer to their families for a while. In 2010, they decided to put their Arizona house on the market and searched for a home in Sarasota. Within six months, the house sold, and the couple bought a place in Sarasota, where they have now lived for more than 10 years.

In those 10 years, the Orioles have become an integral part of the community, and so have Brian and Diana. The couple had been heavily involved with a variety of organizations in Baltimore, including their “One-For-All Fund,” which supported the University of Maryland Children’s Hospital through various fundraisers. As they settled in in Sarasota, they were eager to find organizations to support in their new community.

One of those opportunities presented itself in Newtown, the heart of the city’s African American community. Baseball was once a tradition to the people of Newtown, but over the years, interest in the sport declined. Roberts felt compelled to reinvigorate the community’s passion for the game he loved. In 2019 and again in 2020, he worked with several Major League players and coaches to host the Brian Roberts Newtown Baseball Clinic, a free baseball skills camp for youth players.

“We had about 100 kids [in 2019] and 100 kids [in 2020],” explained Roberts, now a Community Ambassador with the Orioles. “[In 2019], we had about 50 kids sign up to play tee-ball for the first time ever. It’s really neat to see that and to give kids an opportunity to experience baseball in a positive environment.”

Among the big league players Roberts recruited to help with the clinic was Orioles infielder Richie Martin. The first overall selection in the 2018 Rule 5 Draft, Martin has been eager to get involved in the community, and the clinic presented the perfect opportunity for him to combine his passion for working with kids with the game he loves.

“I’ve always enjoyed working with kids,” explained Martin. “The opportunity to work alongside Brian popped up, so I was all in. Giving back to the community is so important and being able to do it through baseball made it that much more special.”

Roberts, who made his Major League debut when he was just 23 years old, knows the importance of showing younger players how to use their platforms to create change.

“I think it’s crucial,” he shared. “I had guys who did that for me. Jeff Conine was a big one. He’s done incredible work in Fort Lauderdale with the children’s hospital. I played in his golf tournament when I was a rookie and numerous years after that. I just got to see some of that impact and it really spurred me on as a young player to start to explore how to use the platform that God has given me as a professional athlete to impact others in a positive way.”

As a Community Ambassador, Roberts has found success through collaboration. Whether that collaboration is with players like Martin or local organizations like The Child Protection Center and Mothers Helping Mothers, Roberts is always looking for ways to amplify the work that is being done in the Sarasota community.

“The thing I want to do is collaborate on a partnership where the Orioles come alongside things that my wife and I are doing in Sarasota to support us, and at the same time, I want to come alongside the Orioles to support all the great things that they are doing in the community,” he shared. “We’re continuing to try and add to that and really see how we can make a positive impact together.”

During the 2020 Athletes & Artists Play for Kids Charity Weekend, Roberts partnered with the Orioles to host the Face Autism Baseball Clinic, working with young athletes on hitting, pitching and having fun on the baseball field.

When the COVID-19 pandemic hit in 2020, Brian and Diana continued to find ways to make a positive impact in Sarasota and throughout Birdland.

The couple partnered with The Child Protection Center to film a PSA to raise awareness about child abuse prevention and treatment during a time when domestic violence was on the rise. They also supported families in need with Mothers Helping Mothers, and helped many Sarasota residents battling food insecurity as a result of the pandemic through Visible Men Academy’s meal program for students.

A prolific base-stealer during his career, Roberts participated in the Orioles’ 5-Tool Player Series to teach kids how to improve speed and agility at home during quarantine with some simple, fun exercises. Roberts, who ranks second in club history with 278 career stolen bases, enlisted the help of his two young sons, Jax and Nash, for the video.

While his work in the community is a major part of his life, it isn’t the only thing that keeps the Orioles Hall of Famer busy. Brian and Diana adopted a baby boy, Cru Immanuel Roberts, last September.

“The one thing that a lot of people said about quarantine was that it allowed us to slow down and spend more quality family time,” he shared. “We were no different. We spent a lot of time playing family games, working out as a family, and Jax and Nash fell in love with golf during this time.”

From youth baseball clinics, to his role as a Community Ambassador, to playing catch or golfing with his sons, Roberts is enjoying the balancing act that is his post-playing life.

“It’s a really great mix of my time,” he explained. “I don’t have to work every day, but I want to continue to do things that I’m passionate about. The game of baseball is one of those things, but my role as a husband and father is by far the most important.”

After 10 amazing years in Sarasota, there is no doubt that Roberts is already looking ahead to what the new decade will bring.