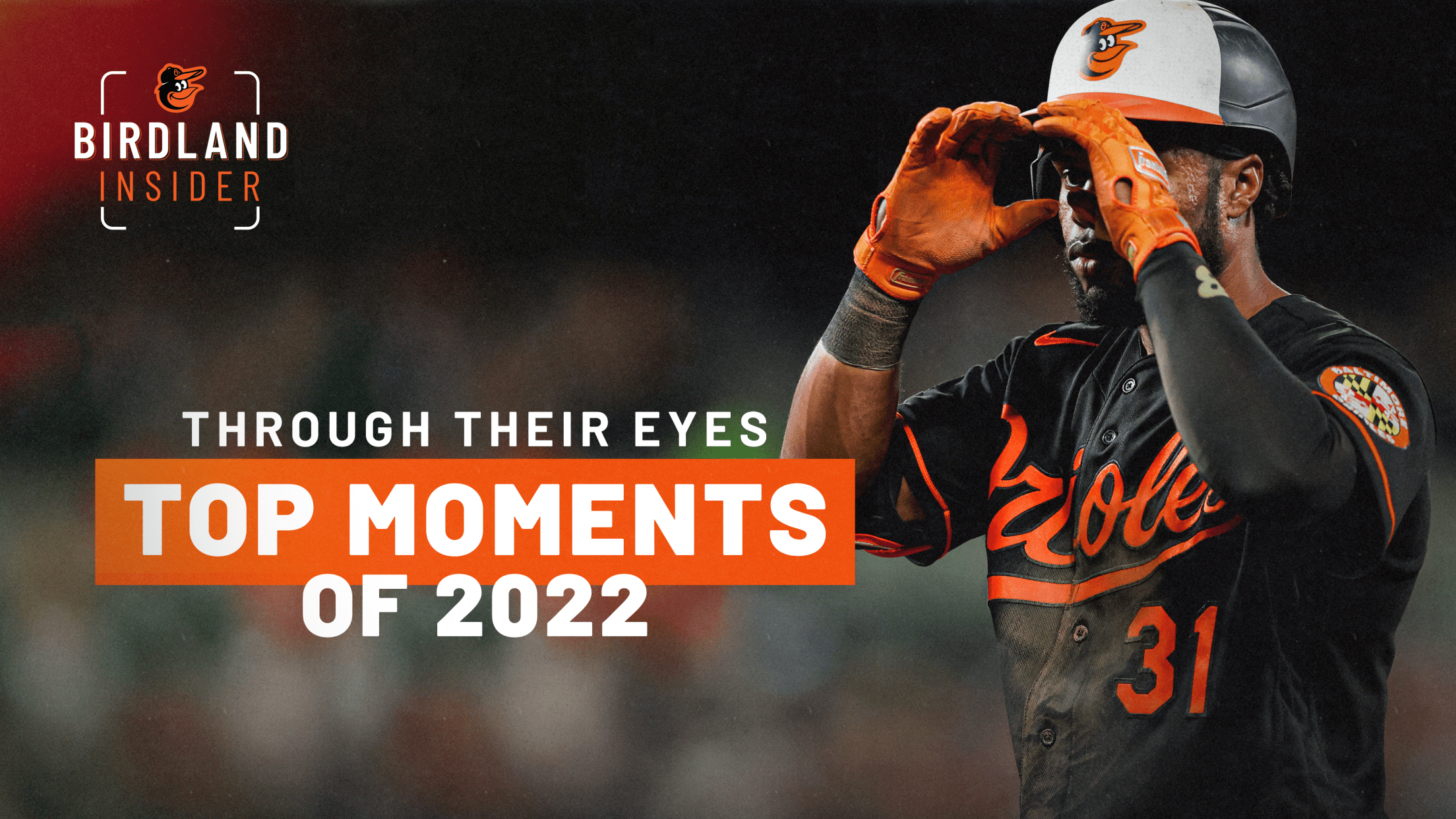 Through Their Eyes: Top Moments of 2022

The 2022 Orioles season was filled with many memorable moments including Major League debuts, walk off wins, and clinching the club’s first winning season since 2016. As we look back on this year, we asked the players and coaches to share what they will remember most about this season.

“My favorite moment of the season was the whole win streak through the middle part of the year. That sticks out to me, just getting on that roll and winning all those games and seeing Camden become more electric.” – RHP Bryan Baker

“The 10-game winning streak that led into my son being born.” – Co-Hitting Coach Matt Borgschulte

“The 10-game winning streak. It just felt like everything was easy, everything was clicking, it was a ton of fun to be a part of the clubhouse. A ton of individual performances over that winning streak as well, so it wasn’t just one guy but the whole team collectively coming together having a really exciting stretch.” – Co-Hitting Coach Ryan Fuller

“I would have to say the 10-game winning streak. I think [winning] the 10 games was great, but more than anything, it just kind of signified that things were changing here in Baltimore, and the team is starting to move in a better direction in terms of wins and losses and a more exciting future.” – Third Base Coach Tony Mansolino

“My favorite moment from this year would be the 10-game winning streak. Just in that weird mix of the season where we were showing signs of being a really good team, we just needed that push and that winning streak definitely did that for us. It brought us a lot of excitement and during that time, a lot of fan support, especially out of Baltimore and aways games as well. It’s a pretty cool memory.” – OF Cedric Mullins

“My favorite moment was kind of the stretch when we won the 10 games in a row.” – RHP Austin Voth

“I think the best moment was when we won the 10 games consecutively. I think that the confidence of the team was really high, everything felt really good. And I think that from there on, it helped us to have the season we had. Obviously, we didn’t get into the playoffs, but I think that we improved a lot and I think that was the most important moment of the season.” – INF Ramón Urías

“Without a doubt for me, was when we won 10 games in a row. That helped us a lot in terms of the team’s unity, the confidence that we got after getting off to a difficult start to the season and I think that it gave us the push to maintain more united and active in the league.” – LHP Cionel Pérez

“For me it was the 10-game win streak. Every day somebody else new was probably involved, it wasn’t just one guy. And obviously, after a handful of losses that we’ve had, just to be in that conversation and creep up on people and get back in it, for me that was the highlight.” – First Base Coach Anthony Sanders

“The entire season, for me.” - Bench Coach Fredi González

“The best moment has been what we’ve done to this point. They didn’t expect us to do what we did in such a short amount of time and get to where we are right now when people ‘expected us to win 50 to 60 games.’ We’ve won more than people have expected us to. The team and the young guys who were on the team put in the work, which no one was expecting to happen. I think that’s the nicest moment, I would say, of the season. I think that the entire season as a whole. The pitching took us to where we are today. The starters plus the relief that comes from the bullpen, all those guys did the work that took us to where we are today.” – Major League Coach José Hernández

“We were projected to win I think 62 games maybe and we won 83. We won 30 more games than what we did in 2021. It’s pretty special, with this group, it’s pretty special.” – Assistant Pitching Coach Darren Holmes

“Seeing this entire group working hard for what they were trying to accomplish and going out and transferring that into wins and solid Major League performances. It’s the entire group, it’s not just one moment. Seeing that progression from putting the work in and grinding through and getting out of the box a little slow and then boom, they kept doing the work and started to consistently help our team win the way we won across the whole season. Those were the moments.” – Pitching Coach/Director of Pitching Chris Holt

“Favorite memory, I don’t know if I could pick one more than overall the whole season itself. Favorite moment I would say the start against the Twins or against the Rangers as a personal accomplishment. But overall, just this experience in the clubhouse with this group of guys has been great.” – RHP Spenser Watkins

“We have plenty. I have so many good memories of this season that it is hard to pick one. I think one of those comebacks at home when we were playing the Rays and I hit a home run to win the game. That was one of my favorite moments of this year.” – INF Rougned Odor

“It would definitely be Rougie’s walk off homer against Tampa during my debut. I was numb because it was my debut, but it was awesome for him to do that in extra innings and put us on top. It was cool.” – LHP Nick Vespi

“Probably the Stowers home run. I had just come back from paternity leave. It was one of the first couple games and he’s obviously one of my good buddies. Just coming back to that in this atmosphere was a really cool experience.” – INF Terrin Vavra

“Stowers home run because I think that was one of the points in the season where it was such a big moment in the game and season. I think having a rookie come out and be able to hit his first home run in a clutch spot off of a premier closer in the big leagues was a huge boost to not only him but the entire team. It was the start of that young talent group coming up and contributing to the team.” – RHP Tyler Wells

“Trey’s inside the parker was my favorite moment. Everybody sorta knew what was going on. For his last home game and last at-bat, for that to happen was really cool. It’s something I will always remember.” – INF Ryan Mountcastle

“There are so many that stick out, watching Trey hit a little league home run in his last at bat at Oriole Park was pretty sweet. He also had a walk-off against the Angels and it was an amazing ninth inning comeback win. Those are the two that stick out the most.” – INF Tyler Nevin

“Seeing all the young guys come up here and contribute right away. I know that feeling of being that young guy your first season trying to find your way up here. They all helped contribute to where this season ended. It’s exciting for me to see those guys because I remember that position.” – LHP Keegan Akin

“Honestly being able to make the phone call to Adley, Stowers, and Terrin. Being able to tell them I was coming up was a pretty special moment. And then being able to share the field with them for the first time was pretty awesome.” – INF Gunnar Henderson

“Adley’s debut was an incredibly special day for the whole organization. Especially me coming up with him every step of the way, each affiliate being with him. That was incredibly special to see him take the field, look all the way around and be the guy we expect him to be here so that was a really special day.” – Co-Hitting Coach Ryan Fuller

“My favorite moment from this season would be my St. Louis start. It was my first career win, career-high in strikeouts, and then I got my cold beer shower after.” – RHP Kyle Bradish

“I would have to say going into Yankee Stadium for the first time and taking two out of three from the Yankees and getting my first career save in a 2-1 game. It was an unbelievable feeling.” – LHP DL Hall

Taking Two of Three From the Astros in Houston

“My favorite team moment of the year was probably right when I got up and we were in Houston. [The Astros] were a first-place team, and we were right in the middle of the playoff hunt. We took two out of three in Houston, and I think that was kind of a moment for us as a team where we were like, ‘not only are we in the hunt, we really believe that we can get it done.’ Obviously, things didn’t go as we hoped it would in the long run, not making the playoffs, but just to be on a team that was about winning and to be right in the thick of things, all of us pushing together in the same direction, that was the best moment for me.” – OF Kyle Stowers

The Orioles 4-1 win over the Chicago White Sox

“I think it was when we were in Chicago against the White Sox and we had a little like baseball theatre with them. We cleared and then Mateo stole second, and then stole third, and Ced drove him in, and then Ced stole second. I think that entire moment was my favorite moment. There were words amongst the teams, and it just showed us that we had finally put both feet on the ground and now we go. And we went. That was a huge moment.” - Major League Field Coordinator/Catching Instructor Tim Cossins

The Off the Field Moments

“The day we got dressed up at the end of the season, where they dressed up all the rookies. Later after that, we went out to dinner, and we had a really nice time together. We had lots of fun, we had a good time as a team, and the harmony just made it a nice and special night.” – RHP Félix Bautista

“All of the birthdays that happened in the clubhouse after the game and smashing guys faces into the cake. Those were pretty cool.” – RHP Logan Gillaspie

“For me, it was that team dinner we had. It was a super special moment for me, and in Chicago as well when we all got to hang out as a team. That was something amazing that left me with my mouth wide open.” – INF Jorge Mateo